Actually, that doesn't seem to be quite so funny now I'm not seven years old. Strange. Anyway, the point of all this is that the new 2014 edition of the Guinness Book Of Records came out yesterday. And, having shunned memory-related records for many years in favour of attaching clothes-pegs to your face and being fat, there's a whole two pages of mind-themed records this year! 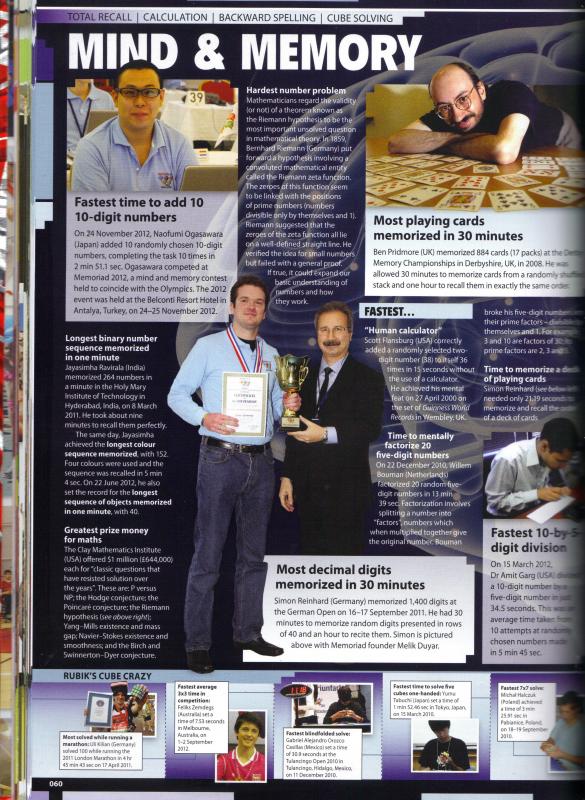 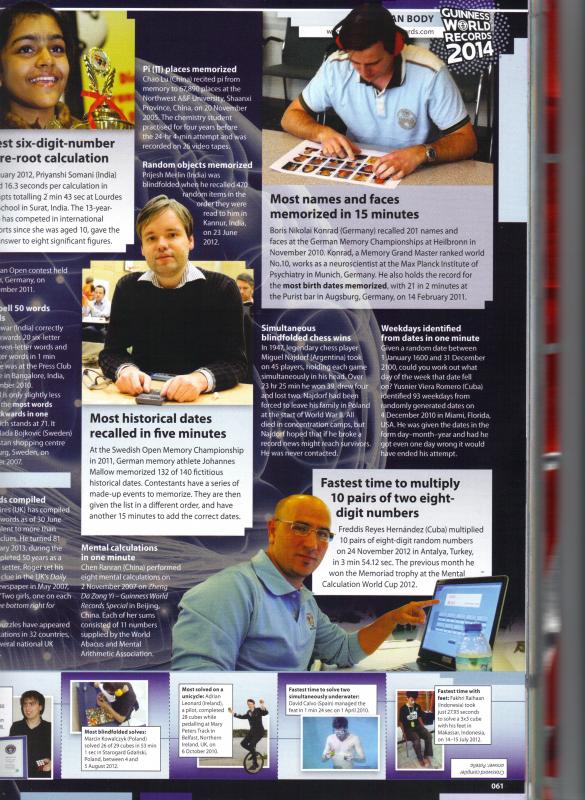 The whole page is festooned with photos, of me, Naofumi Ogasawara, Simon Reinhard, Melik Duyar, Priyanshi Somani, Johannes Mallow, Boris Konrad, Freddis Reyes Hernandez and some guy I've never heard of called Dr Amit Garg! We all owe a huge debt of thanks to whoever persuaded the Guinness people to include us all in the book - I suspect Melik, he's good at that kind of thing (and the Memoriad gets a lot of plugs), but he hasn't taken the credit for it. There are lots of other fun records too, and not just on those two pages. Go out and buy the book, it's only £10 at W H Smith!

I'm credited with the record for 30-minute cards, a little strangely (hour cards is, to my mind, the cooler marathon cards record). As the book correctly points out, I did it at the Derby Memory Championship, back in 2008, and I see that the other records that made the book were done at things like the German championship - competitions that are only tenuously connected to the World Memory Sports Council. The World Memory Championship goes unmentioned. It's all politics, but who cares? I'm in the book! And that photo of me, taken in 2004, has never looked cooler!
Posted by Zoomy at 7:17 pm

That is so cool! Not only that you're in the Guinness Book of Records, but that I must still be 7 years old because the defecation joke (more specifically the word "poo") made me laugh more than a 33 year old should.

Our version of the gag was "Medication, medication's what you need", for someone who had done something sufficiently foolish for us to decide that that was required.