We're just over a week away from the three-in-one memory competition extravaganza at the Mind Sports Olympiad, and it's not too late to register, if you want to join the fun! There are three separate competitions, each with their own theme and medals to fight for, and if you want to compete in all three, they add together to make the overall MSO Champion. Tonight, I'm shining the spotlight on the first competition, which takes up all day on Sunday 19th - Marathon Memory. 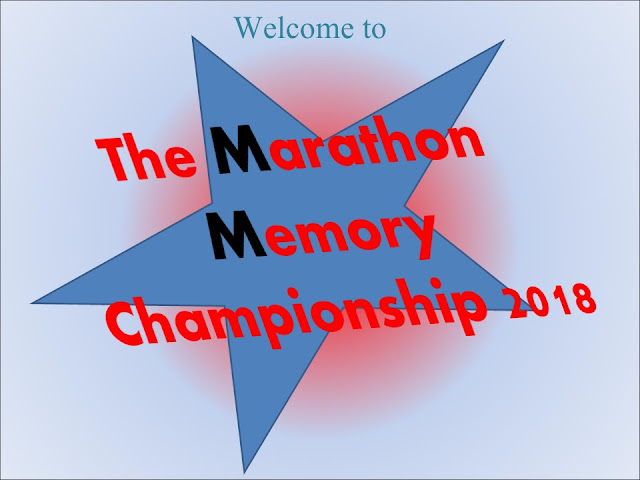 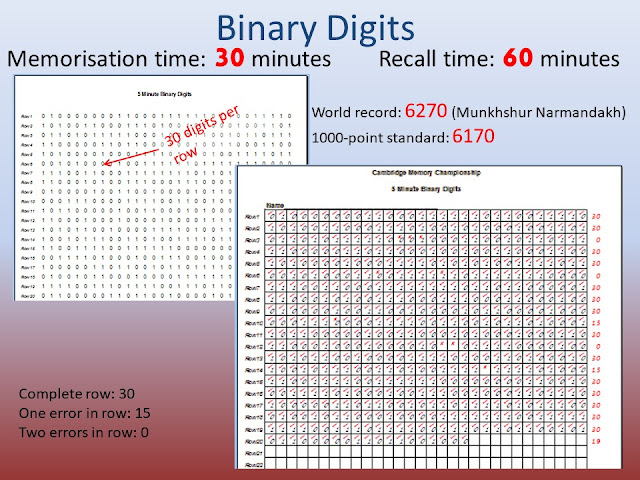 It's going to be a long day, with not much time to rest in between long-term memory tasks. And we start with 30 minutes to memorise as many binary digits as possible, after which you then have 60 minutes to write down what you've memorised. As you can see from the hopefully-comprehensible diagrams above, they come in rows of 30 ones and noughts, and you have to get a complete row correct to get 30 points. One mistake, or blank space, in a row gets you 15 points, two or more errors and there's no score for that row. The last row, and only the last row, that you memorise can be partially filled in - as above, our competitor got to the 19th digit of the 20th row, and scored 19 points. 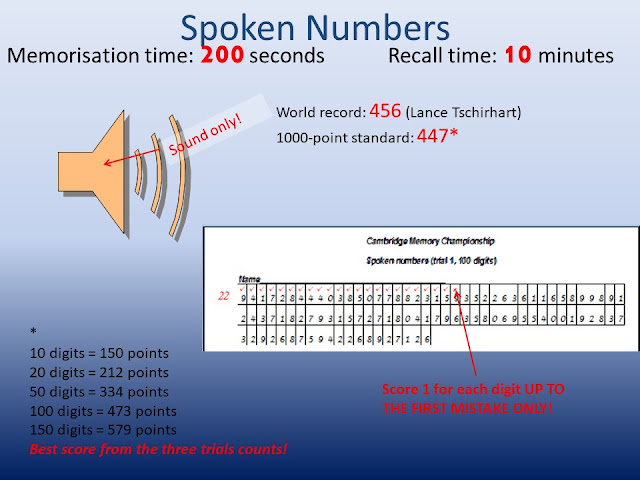 Then we'll go into a comparative rest interval, with our first trial at spoken numbers. You'll hear 200 digits spoken aloud (on a recording) at a rate of one digit per second. And you have to recall the lot - you score points for each correct digit, but only up to the first mistake. So be careful, but there are three trials at this (with an increasing number of digits each time), and only your best score from the three is counted. 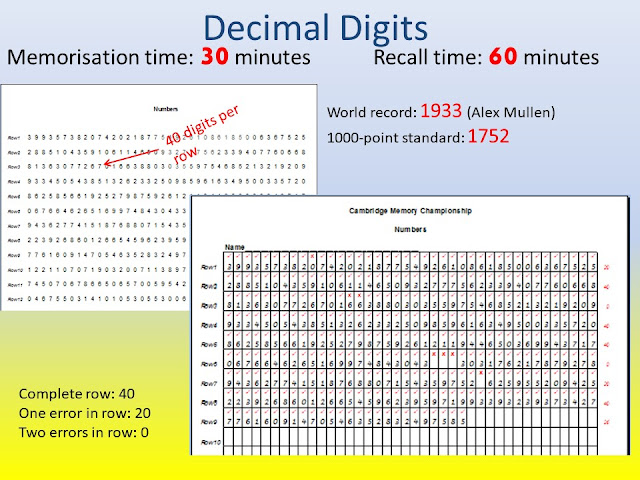 Then we go into our 30-minute decimal digits, which work exactly the same way as the binary digits up above, only this time they range from 0 to 9, and they come in rows of 40. The scoring works the same way again. After that, we'll take our only significant break of the day (assuming we managed to start fairly promptly at 10:00, it'll be about 2pm by now), to let people get some lunch and cool their brain down a little, and then we get back into the swing of things with some more spoken numbers. 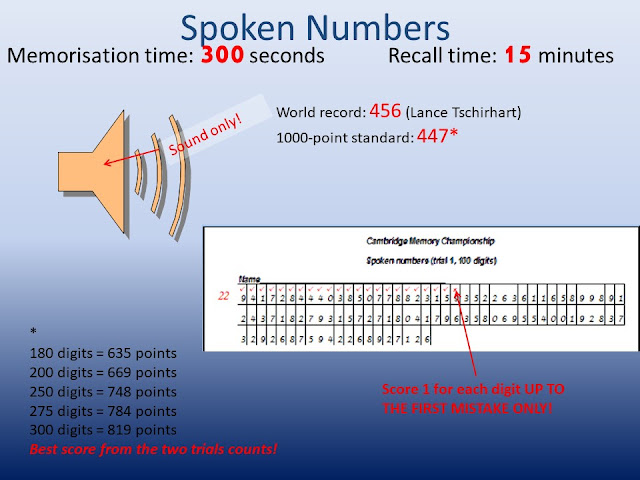 It's just the same as before, except now you have to sit through 300 spoken digits, a whole five minutes' worth, before you get to recall them. Even if you lose track after six digits, you still have to patiently sit in silence until they've all finished playing, I'm afraid. 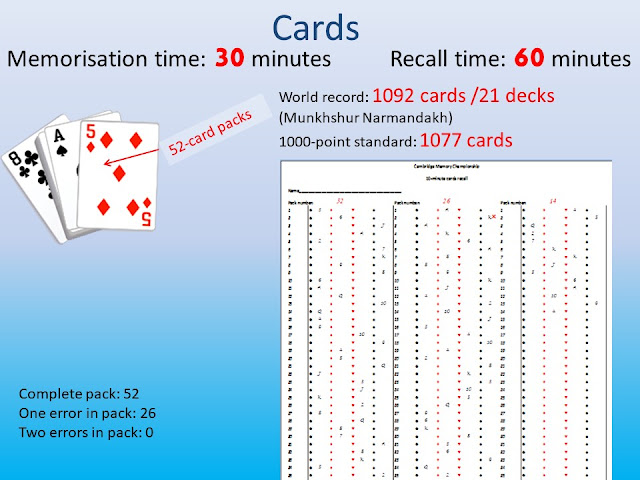 And then we get into cards. Real, physical packs of cards, shuffled randomly of course (do bring your own if you prefer; most people do), and 30 minutes to memorise as many as possible. The 60 minutes of recall is done on papers like the ones above. For example, if the first card in the first pack is the two of spades, write a 2 next to the spades symbol in the first row. Then a 4 next to the diamond in the second row, and so on until the whole pack is filled in. Once again, for the final pack you looked at, you can fill in a partial one and score the number of cards you wrote down; for all the others, it's 52 for a complete pack, 26 for one mistake, zero for two or more errors (which includes switching the order of two cards). 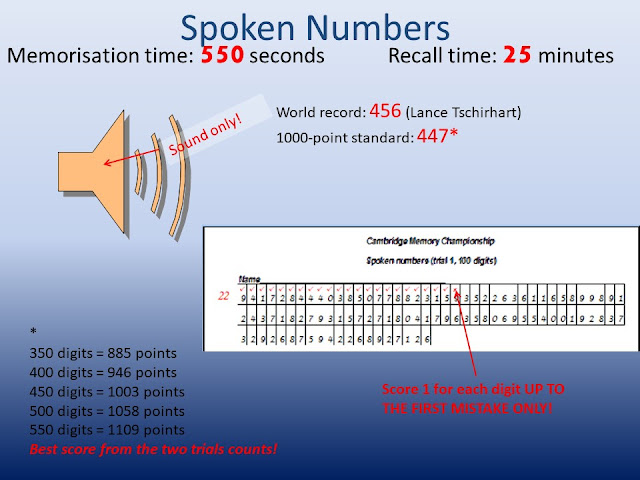 And finally, although everyone will certainly be exhausted by now, there's a final chance to improve your spoken numbers score, with a mammoth 550 digits. After the recall of that, we'll have come to the end of an eight-hour day of arduous memory, but it'll all be worth it for the prizegiving ceremony straight afterwards - there'll probably be a podium to stand on, and everything!
Posted by Zoomy at 8:21 pm No comments:

I just saw Ant-Man and the Wasp - two visits to the cinema in a year, I'm definitely a movie-fanatic now! And I'm still completely in love with the Marvel Cinematic Universe. Do I really have to wait until next year for the next one?

Anyway, here's another thing I do, thanks to Joe and Nick in the office - HQ Trivia. It's fun! Anyone else who plays the British version want to be friends and share answers? I only occasionally know things, but it does sometimes happen.
Posted by Zoomy at 3:00 pm No comments:

Return to the scene of past glories

Remember eleven years ago, when the UK Memory Championship was in Highley, and I thought it would be a cool and appropriate tribute to my then-recently-deceased father to travel there on the Severn Valley Railway on a steam train? Only for it to turn out that the railway line had been destroyed by floods a little while before, so I had to go there in a (shudder) taxi, probably, unless someone gave me a lift. Someone probably did give me a lift, come to think of it. But it would still have been a lot better to have gone there on an actual steam train. Anyway, I got over the disappointment the next day when I became the first person to ever memorise a pack of cards in under 30 seconds, and so never did think about the Severn Valley Railway ever again, even when I moved to Redditch, which is really not far away from it at all.

Until a couple of weeks ago, that is, when a friend from America said he was coming over here and wanted to see the Severn Valley Railway, and would I like to go along with him? So that's what we're doing tomorrow.

Kidderminster, where the steamy railway meets the normal railway, is close to Redditch, but on a different train line, so it takes ages to take the train from one to the other. It's a lot like living in Boston and wanting to get the train to Spalding, if that analogy makes any sense to anyone. Lincolnshire people, maybe. But there is a station on Redditch's little branch line, Barnt Green, that the main line from Birmingham to Worcester thunders through, and commuter trains stop there once a day in each direction to allow people who live in Barnt Green to go to and from work in Bromsgrove and Worcester if they really want to. It's like the train from Derby to Sheffield that stops at Belper once a day for the same reasons, if that analogy makes sense to anyone at all. Wow, I'm becoming some kind of train nerd.

So I can get to Kidderminster tomorrow by switching tracks at Barnt Green, rather than doing what you have to do to get anywhere else from Redditch, and go all the way into Birmingham and out again. That's fun, but it's not nearly as fun as the return journey. Just once a day, you can get from Kidderminster to Redditch by going Kidderminster-Droitwich Spa (13 minutes), then another train from Droitwich Spa to Bromsgrove (9 minutes), another one from Bromsgrove to Barnt Green (6 minutes), and a fourth train from Barnt Green to Redditch (10 minutes)! Four short hops, and the journey time is reduced to only about twice as long as it takes by car! I've got to try that tomorrow, and see if all four trains are running on time...
Posted by Zoomy at 10:51 pm No comments: