It's really all about buying things

It's really no fun at all having to work late on December 22nd. I've done it before and not liked it, and I didn't have to work in a shop packed with Christmas shoppers. So I deeply sympathise with all those poor people who have to man the tills for late-night shopping at this time of year. At least, those are the thoughts that passed through my head when I went out late-night shopping tonight. I didn't stay at home to ease their annoyance factor slightly, or anything like that.

Wouldn't it be great if everyone did, though? Not only would you make the lives of a lot of low-paid customer-service-facilitators a whole lot more bearable, but it'd cause a major economic panic and stories in the papers about how Christmas sales are down, even if they aren't, possibly the collapse of capitalist society and the rise of a glorious socialist revolution of the kind I keep going on about! Wouldn't that be something?
Posted by Zoomy at 10:37 pm 1 comment:

The dog of death

I checked the Radio Times synopsis of The Grim Reaper Dog - apparently it has correctly predicted the deaths of 58 residents of a nursing home in Ohio over the last three years, by barking to the staff and then staying with the patient until they pass away. Personally, I think I'd rather end my days in a nursing home that doesn't have a dog that tells me when I'm going to die. It's probably carrying some contagious disease, that'll be how it does it. I'm sorry, this mutt doesn't hold a candle to the Memory Chimp.

It's times like this that I feel I really should find something more worthwhile to blog about...
Posted by Zoomy at 9:58 pm 3 comments:

Set your videos, or your DVD recorders or Sky+ boxes or whatever the cool people have these days, for 7:30pm on January 29th, for "The Memory Chimp". Actually, that'd be a cool name for a documentary about me, but in fact this is the one about Ayumu the chimp, with a brief cameo by me. It's the seventh in the Extraordinary Animals documentary series - set your videos for the others if you like, but they didn't see fit to ask me what I think about the non-human stars of those ones. The lineup is:

The titles all seem more or less self-explanatory, except for The Grim Reaper Dog. What the heck could this extraordinary dog do to merit such a title? All I can think of is that it's a documentary about Joscha Sauer's "Nichtlustig" comics, with particular emphasis on Death's toast-hating pet poodle, but that seems a little unlikely. I hope it is, though. 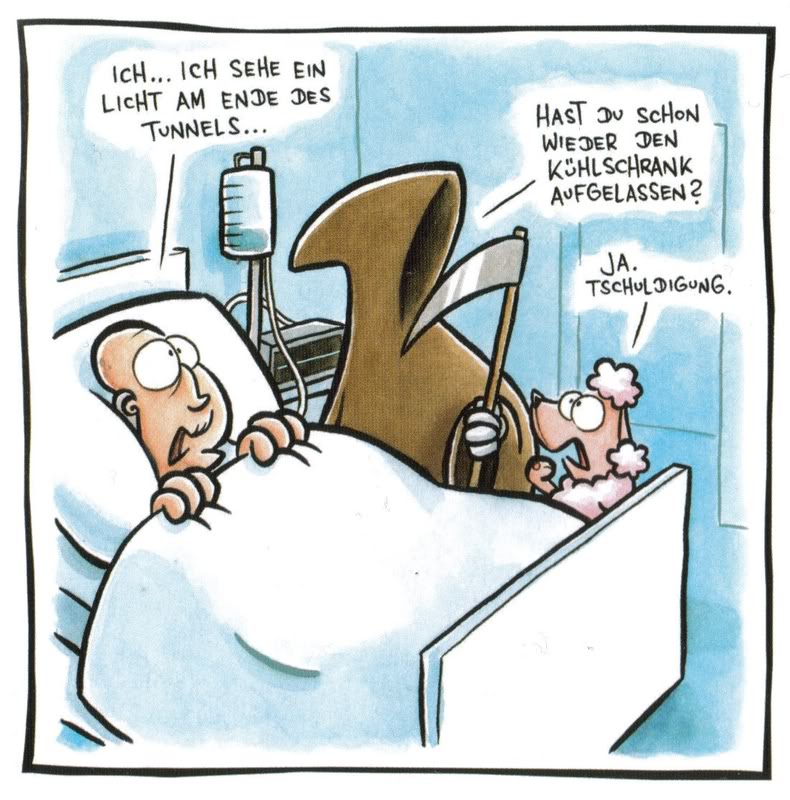 Tis the season for stocking fillers

I'm always delighted to see how much cheap tat there is in the shops at this time of year. Especially when it comes to toys. Can't afford a Transformer for your whining offspring? Buy them a Transmogrification Robot instead! That's what my brother did for me this year, anyway. The best thing about these cheap and tacky versions of the cool toys is that the packaging is generally made by non-English-speaking slave labour, which means the instructions are always fun to read, and this is a particularly good example: 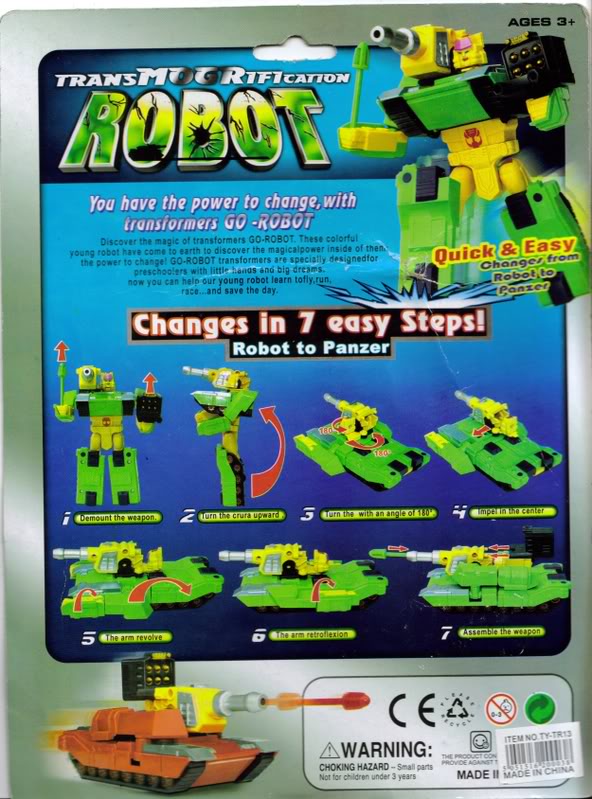 I love the text:

Someone has really put some thought into this - a lot of these toys, if they say anything at all, limit themselves to a snappy phrase like "Special for you of children design. It will give you infinite pleasure!"

How to transform this robot:

1 Demount the weapon.
2 Turn the crura upward .
3 Turn the with an angle of 180º.
4 Impel in the center
5 The arm revolve
6 The arm retroflexion
7 Assemble the weapon

This may be news to you, it certainly was to me, but 'crura' is a real word. It means the parts of the legs between knees and feet. Although the first page you get if you type 'crura' into Google is the Wikipedia entry for 'clitoral crura'. Which made me wonder exactly what part of our young robot I'm meant to be turning.

If you type 'retroflexion' into the Google toolbar, the autocomplete function suggests 'retroflexion uterus'. Is there nothing on the internet except ladies' bits? It's shocking!
Posted by Zoomy at 10:06 pm 2 comments:

I've actually done most if not all of my Christmas shopping. I haven't wrapped anything up yet, but there's plenty of time for that before meeting my brother for lunch tomorrow. It's the thought that counts, and a shoddily, hurriedly packaged present shows you care.
Posted by Zoomy at 10:16 pm No comments:

After last night's whining about memory training, I found the time and the inclination for a 15-minute numbers practice run today. I ended up with an unimpressive score of 576 (attempting 936), but I didn't have any problems with keeping the concentration going for 15 minutes of memorisation and 30 minutes of recall, and my speed of going through the digits was just fine - it was just the kind of mistakes that come from being a little out of practice, combined with the fact that the numbers threw up a whole lot of small furry animal images and I got them all mixed up.

Also weighed myself in Woolworth's again, and found that I weigh exactly the same, to the tenth of a kilo or pound depending which one you want to read, as I did last month, but my fat index has gone up slightly. Whatever that might mean. Still, I'm not too bothered.
Posted by Zoomy at 6:40 am 3 comments:

Dedication, that's what you need

Thank you for all the silliness, it's great to know that I can give orders like that and people will obey me. It's like being the King, only without having to wear posh clothes and eat swans.

Right, now that I know people aren't taking me seriously, I'll talk seriously about memory stuff. I really want to get back into proper training, but there's something just missing in the motivation department. I'm not sure why that would be - it's not like I won the WMC this year, so you'd think I'd be motivated to try to win it next time, but apparently not. I haven't even done a speed cards for a couple of weeks now, Blue Peter and OMC last Saturday aside.

It's annoying, because I'm pretty sure from past experience that I'm going to get to a point eventually when I want to get back into it, and I know that the longer I leave it, the longer it'll take when I do start again to get my mind adjusted to long periods of concentration. I know it's much too early to worry about these things, but I feel like if I don't keep the practice ticking over starting around now, I won't be on top form again next summer and autumn in the competitions. Gah, the intricate workings of my brain - I both want to and don't want to practice right now, so I'm never going to be satisfied.

A competition would be good right now, actually - something next month that I could go to and get back in the memory-championship mood. We need more competitions, I'm always saying it, I know, but it's true. It'd be great to revive the Memory World Cup next year, wouldn't it?
Posted by Zoomy at 9:37 pm 5 comments: