It's official, I'm fat and lazy

I started today with a couple of firm resolutions. Lots of memory training, and since I'd run out of sweets in the house, no going out and buying more. No training whatsoever and a metric buttload of sugar later, I'm feeling slightly guilty. It is, for those not keeping track, two weeks to the world championships. My standard of preparation is much better than last year's, but much worse than the year before's. I did do a full weekend's workout the weekend before last, and if I do a load tomorrow I'll still be happy with the day's work. I've rather unwisely accepted an invitation to a barbecue next Saturday night, so I'm not sure how much training I'll manage to fit in around that. Theoretically I could do lots and lots, but theoretically doesn't generally cut much ice with me.

I'm sounding like a stuck record here. I should be talking about something new and original. Hey, "Come On Eileen" is just coming on the radio. How long have I had it on? Not more than an hour or so, and that's the second time this song's come along. Same DJ too - it's Suggs on Saturday nights from six till ten. Perhaps he forgot. Or perhaps he just likes the song a lot. It is a good one.

I was thinking of telling an extremely tasteless joke about an advert on the radio, but I don't think I will. People expect certain standards from this blog.
Posted by Zoomy at 9:03 pm No comments:

My boomerang won't come back

The TV channel Boomerang is in its annoying "Scooby Summer" mode at the moment. This means that it quite literally shows nothing but Scooby Doo cartoons every single day from 6am to 9pm. I'm all in favour of a bit of Scooby every now and then (I even like Scrappy), but I can't imagine what makes them think people want to watch it constantly every single day. It's just plain silly. Hopefully they'll revert to normal again when it stops being summer.

There's also a free plastic boomerang with this week's Beano. I'd rather like to be able to throw a boomerang (in the sense of throwing the thing in such a way that it comes back, I mean), but I have a feeling that it would take a bit of practice, and practice of the kind that has to be done in wide open spaces. And I'm not self-confident enough to do that kind of thing somewhere where people can see me. So barring a trip to the Sahara desert or Antarctica, I suppose boomeranging is just not a skill I'm ever going to acquire. It's a darn shame, because imagine how cool it would be to be out in the park, nonchalently pick up a boomerang that someone's left lying around and throw it in a perfect curve. Then wander off while everyone goes ooh and aah and who was that handsome boomerangist?
Posted by Zoomy at 9:03 pm 4 comments:

My train this morning was sitting in the middle of nowhere for twenty minutes because of a cow on the line. I really have nothing to add to that.
Posted by Zoomy at 9:32 pm 1 comment:

Remember me saying yesterday that I was going to go into work early today? Well, that was the plan, but then when it came to getting out of bed in the morning I decided to snooze for another five minutes and woke up just in time to get up, get dressed and dash down to the station to catch the 8:38. Only to get there and find it had been cancelled due to a technical fault. So I was half an hour late, and had to stay late tonight to get things done.

I really hate working late. I don't get paid extra for it, even if I manage to get in on time in the morning, it's just out of professional committment or possibly just not wanting to get told off for missing deadlines.

Enough work-talk. I've done too much of that lately. I still haven't written that 150-word memory for the Alzheimer's people. Having decided to write about my dad and his clown costume from the first Red Nose Day (he got on the school bus with me and demanded that everyone give him money), I find that I'm really struggling to put it into words. It's just because it's going up on the internet, with my name on it, with people to read, so I want it to be just right. And I know that that description also applies to this blog and I don't have a problem with writing this, but you know... it's different, somehow.
Posted by Zoomy at 9:00 pm No comments:

Isn't nearly as nice as I remember it being. Once again nostalgia can't stand up to harsh reality.

I was going to write about something slightly more lengthy and interesting (well, maybe not interesting - an essay about why I love the hugely underappreciated cartoon character Sniffles - but certainly lengthy), but I think I'll go to bed instead. I need to be in work early tomorrow because some fool's scheduled a three-hour meeting of minimal use or interest to me in the middle of the day and I've got lots of real work to do. These things are sent to try us. And when I moan about something like this, the audience have to ask me whether I've written those books yet. Keep me on my toes, please.
Posted by Zoomy at 10:17 pm No comments:

Just for you, Mike 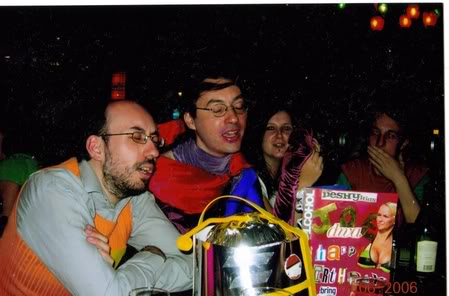 Seeing as Mike Carroll, who if I had a fan club would be not only the president but also the person who does the fiddly jobs of printing and stapling the newsletter and sending it out to everyone, is always on at me to get some more photos taken of myself and shown to the world, here's me and my brother drunkenly but passionately singing at his party last month.

I'm still not going to get a camera - they're just too much hassle all round, and besides, I'm camera-shy. Except when it comes to VPS get-togethers, and those photos can stay restricted to VPS people, thank you very much. I don't think the world needs to see me in Lursa's dress.
Posted by Zoomy at 10:15 pm 4 comments:

As I've mentioned before, I don't like posting on here while I've got my brother staying with me over the weekend. I don't know why exactly, since he reads this anyway, but that's just the way my mind works. Anyway, I haven't got anything too exciting to say, so I've probably spared you loyal readers a couple of days' worth of tedium by not forcing you to read me droning on about nothing in particular.

It's going to be all work and a strictly minimal amount of play for the next couple of weeks - not just work in the accountancy sense, although that's been a bit of a drag lately, but work on winning the WMC, which has luckily still been fun. But evenings and weekends of the next 14 days are hopefully going to be taken up by memorising cards and numbers, followed by a week's break before the competition. I'm definitely committed to winning it this year (and hopefully by a huge margin too, if I'm at my best and nobody else has got all that much better since last time).

As for the day job, I don't seem to have been firing on anything close to all cylinders for the last couple of weeks. There's been a load of stuff that I'm finding it impossible to get excited about, and I've just generally felt that I'd much rather be somewhere else. I think it's the time of year. Ever since 2002, my life has tended to start a new adventure of some kind in November, and it worries me that there's nothing on the horizon this time round. November 2002 was when I left my job at Adams, I started at Parkhouse in November 2003, in November 2004 I changed jobs and offices at Parkhouse and started working with a different set of people, and in November 2005 I started at Nord Anglia. But I am seriously thinking in terms of handing in my notice and wandering off into the wilderness again, and I need more people to tell me that that isn't a good idea at all, please. Because believe me, it isn't.
Posted by Zoomy at 9:24 pm No comments: