I've just found a caricature of myself on the internet that I didn't know existed! 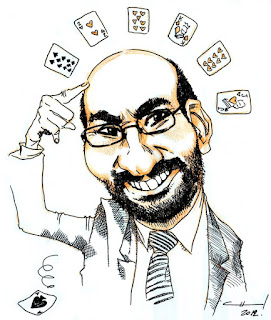 It's a bit out of date, since it's talking about my 26.38-second world record, which is sadly ancient history now, but isn't it awesome!
Posted by Zoomy at 9:42 pm 11 comments:

The last two Mondays in a row, I've found myself idly channel-hopping just as "56 Up" was coming on, and I've enjoyed it a lot. I remember watching the 42 one, back in what must have been 1998, and finding it interesting, but it's even more fun to catch up with what these people are doing now. The whole project of charting people's lives at seven-year intervals was a downright genius idea, and it's great that the majority of those original seven-year-olds from half a century ago are still willing to talk about themselves for the entertainment of viewers around the world.

It got me thinking about myself (most things get me thinking about myself, I'm disgustingly self-absorbed), and while I originally thought it would make me look pretty unimpressive, actually I'm thinking I might come across as more groovy than I actually am - they record it late the year before, it seems, so my 21 Up in late 1997 would have found me enthusing about the newly-founded MSO and my having won a silver medal at a competition that sounds more impressive than it was; 28 Up in 2004 would have come just at the time I was winning the World Memory Championship for the first time, and 35 Up last year would have seen me making a music video for DJ Shadow and being downright awesome! That actually looks like a genuine progression in my life, rather than the general bumbling around cluelessly that I've actually devoted my 35 years on this planet to, and it makes me feel a great deal better about myself!
Posted by Zoomy at 11:18 am 1 comment: