Our company has just moved offices to the building next door. Among the changes was taking down the big letters on the wall spelling ASPIRE (which is an acronym for the company's official values). They were going to just throw them away, since they don't match the new company branding, so I rescued them and took them home. I argued that there could be no end of situations where I might need some two-foot-high blue capital letters, and I'm glad I won't be caught unprepared if that happens.

See, now I've got the letters P, R, I and E, I'm half way to being able to write my surname in giant letters on the roof of my house, in case anyone wants to locate me from a satellite in orbit. While I was in Sweden, I was looking for a company whose official values spell MORD (murder), but couldn't find one. Possibly they keep quiet about it in case of legal repercussions.

But even without those letters, I can still think of plenty of uses for the letters I've got. If I ever open a zoo and want to label the "APES", I'm all set. Or if I open "A PIER" at the seaside and need to label it in big letters so that ships at sea can see what it is. Or even two "PIERS" that are unusually close together and so can be labelled by means of big letters somewhere in between them. The same thing works if I just put a "PEAR" on the beach instead, and save a bit of money. There are no end of other things I might want to do with the letters, although I'm not the type to command people in giant capital letters to praise me.
Posted by Zoomy at 10:44 pm No comments:

Look how organised I am! 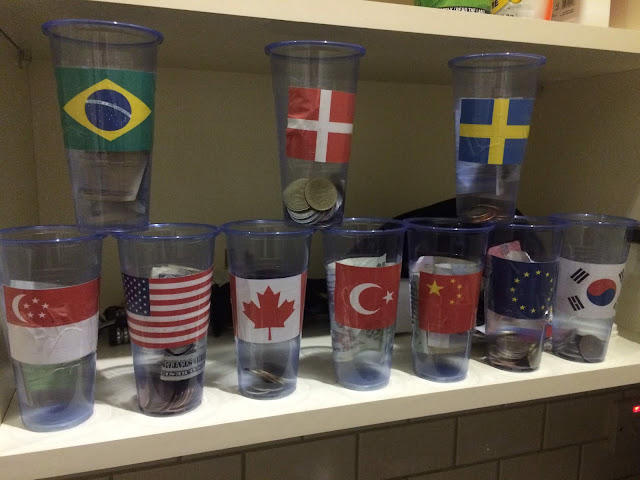 No more pile of miscellaneous small change from all around the world cluttering up my cupboard! Now whenever I'm going to a foreign place I can make sure I've got a few coppers in my pocket (this is important to me, because I like to buy a can of drink and bar of chocolate as soon as I get somewhere, and don't like breaking into a big banknote like a tourist) by just grabbing the appropriate cup and pouring it into my bum-bag!

Unless I go to Russia, because it turns out I had eleven currencies and only ten plastic cups. So that 50 rouble note that Dai (I think) gave me will just have to wait. You can probably get a can of coke for 50 roubles, it's a handy thing to have in your pocket. I've never been to Russia, but that's more my fault than anyone else's - a Russian TV show wanted me there for the last couple of years, but I didn't have the time to do anything about it. But some day, I'll spend that fifty!
Posted by Zoomy at 6:05 pm No comments: