The secret to harmonious co-habitation

My brother was away in Leamington Spa last night, and he's away in Bingham or somewhere tonight, and just paid a flying visit here on his way between the two while I was out today. I came home to find the only change was a pair of cowboy boots had replaced the flip-flops in the hall (he has unusual tastes in footwear), and a pack of newly-developed photos had appeared on the kitchen table, containing lots of drunken pictures from his first Saturday night back in the country. 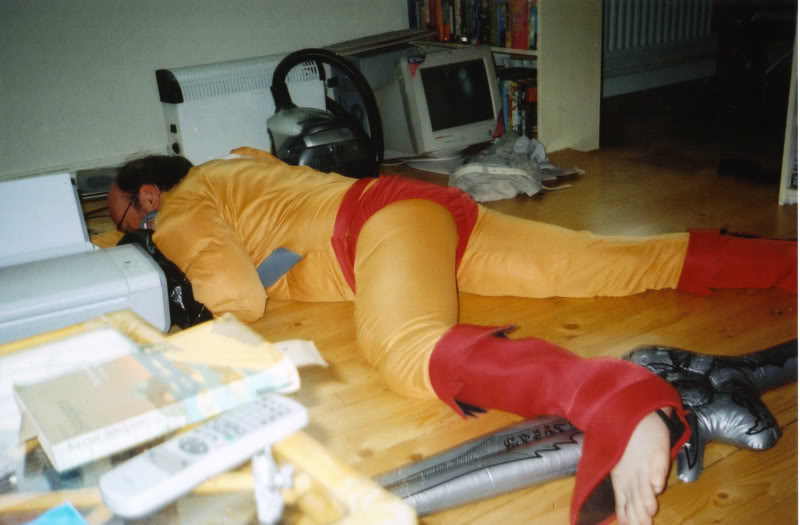 These photos were taken (a little unprofessionally - this is about the only one without a thumb over the lens) just before the immortal phrase "Hey, there's a webcam on my laptop that I never use..." sprang to my lips. Next time, hopefully, the phrase "And there are people I work with who follow me on the internet, so we'd better not post anything embarrassing" will spring up too, but that's another matter.

Still, this picture of a bad day for He-Man is quite artistic. The blurry book in the foreground is "The Remains Of The Day", which sort of sounds appropriate for the scene depicted. And it has the advantage of showing my bare foot. I often mention to people that I've got freakishly long toes, and offer to show them, but most people object to me taking my shoes and socks off and sticking my feet in their face, on grounds of hygiene and general good taste. But now I can just show them this photo, and have them react with disgust and horror!

Anyway, the brother's going back into Chinese exile in a couple of days, so I can miss him again, but until then, I'm just lying back, enjoying the peace and quiet and the return of football highlights on a Saturday evening. Ahh, bliss.
Posted by Zoomy at 10:34 pm 13 comments:

The only thing I genuinely wanted to be when I was young was The Milkybar Kid. So this latest campaign of encouraging adults to audition for the part is quite disturbing to me in many ways. Perhaps it's still not too late for a change of career...
Posted by Zoomy at 7:55 pm 3 comments:

Who's cooler? Me or Daley Thompson?

It's a dead heat, according to the press release sent out today about the UK championship. I beg to differ, unless they're comparing me with Daley as he is nowadays, and if he's really let himself go since he retired from professional athletics. If I was him, I'd sue for libel.
Posted by Zoomy at 6:40 pm No comments:

Radio Nottingham are quite persistently asking me to talk to them, but apart from that, there hasn't been much media interest in me for quite a while now. Possibly my fifteen minutes have nearly run out, along with my run as World Memory Champion (because I'm most definitely not going to win in December, so my only hope for keeping the title is if the championship is postponed indefinitely).

I would really like to find something else to be famous for. Being a star of low-budget documentaries about one subject is easy, but being documentarized for two completely different and unrelated reasons takes a special kind of talent. I just need to stumble across something else that I turn out to be good at - it took me the first 23 years of my life to discover memory competitions, but surely there must be something else out there that I'm not completely incapable of doing. I just need to devote some time to going around and trying something new. I've never tried needlepoint tapestry. Maybe I can invent a new way of doing that and become the world champion?
Posted by Zoomy at 8:31 pm 3 comments:

Got a wife and kids in Baltimore, Jack

Rather than doing any memory training today, I decided what would be really cool would be to go for a very long bike ride, all the way to Derby and back. I'm motivated by the fact that I'm heavier than I've ever been, probably (I was really very fat back in 2002-ish, but I think I'm possibly even fatter now) and another of my friends has now lost well over ten stone after some dedicated dieting and exercising. I'm surrounded by strikingly slender ex-fatties!

I'm realistic about my prospects of losing ten stone plus, but the fact that I could do that and still be the average weight of an undersized greyhound is a bit worrying, and frankly, being two stone lighter would probably be good for me.

So off I pedalled. There is a network of cycle paths between here and Derby, but it's not very well signposted, so you really need to look at a map before you set off. I didn't, and predictably got completely lost very early on in the expedition. But by a pleasant coincidence, I found myself on Cleve Avenue, where Grandma and Granddad used to live when I was little, even though I had absolutely no idea that I was anywhere within five miles of the road! So I went up and down it a couple of times trying to work out which house they lived in (I couldn't remember the number, and although the house does feature on one of my memory journeys, none of the houses there now look even remotely like the one in my mind. They're all too small, for one thing. So that counts as memory training, albeit the completely unsuccessful kind, and I'll just phone Grandma and ask her to remind me.

Anyway, knowing where I was, I set out on my travels again, and before long ended up in a place that I at first thought was Long Eaton but turned out on closer inspection to be Stapleford. At that point I gave up on the idea of getting to Derby before midnight and decided just to try to find my way home, but luckily I immediately stumbled across those cycle paths I'd lost, and followed them through some delightfully scenic countryside back to Long Eaton (where they come to an abrupt end at the back of the big Asda, which I still call "the new Asda", although it's been there for decades and there's now a genuinely new and bigger Tesco looming over it), then went back home the normal way, along the un-scenic main roads.

So, lots of cycling, and then I had an unnecessarily huge dinner to completely counteract any weight benefits it might have had. I'll start dieting tomorrow. Actually, I feel like making this a new thing of mine - forget memory training, I'll get into competitive weight loss!
Posted by Zoomy at 7:15 pm 2 comments: