I'd better get this last part written before the competition on Monday afternoon. This calls for.... speed! 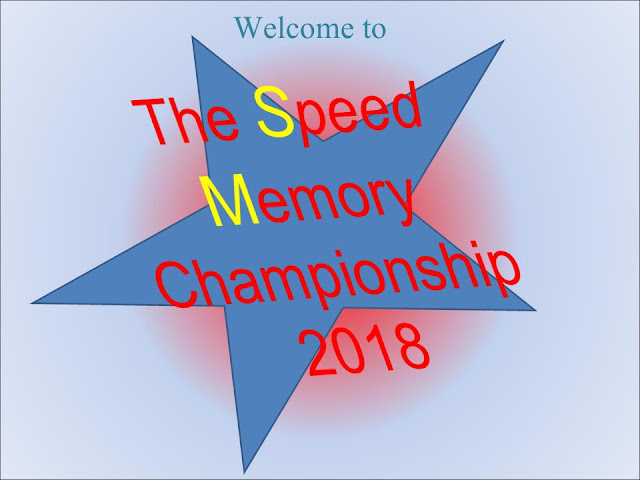 This will be, despite the name, a nice relaxed championship, with no need to hurry through the disciplines. But the memorising itself will be very fast! 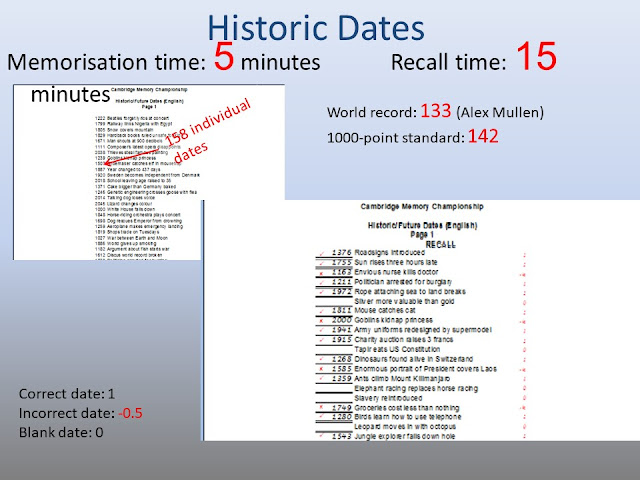 We start with dates - a list of historic events (fictional), with a year beside them. Years can range from 1000 to 2100. You need to remember the year each thing happened, during the 5-minute memorisation time. Then in the recall time, you get the list of events back, in a different order, and have to fill in the year next to each one you can remember. So it's not necessary to remember them in sequence; just match the year with the event. One point for a correct answer, but minus half a point for any year written down incorrectly! If in doubt, leave it out! 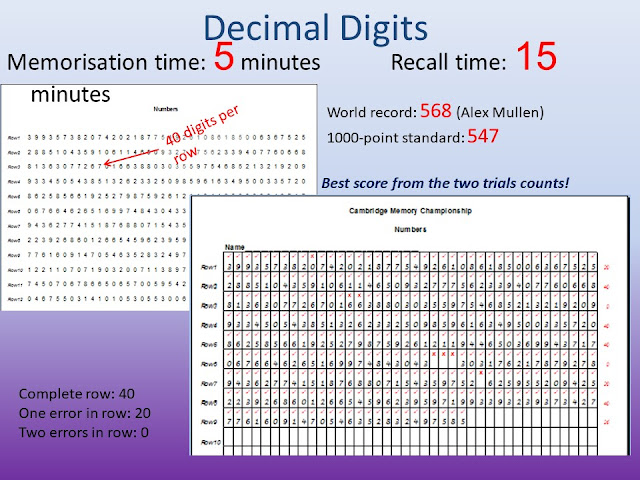 Numbers - and if you read the Marathon Memory description, this is exactly like the 30-minute numbers, except you only get five minutes to memorise this time. And with this one, we get two tries at it, with the best score from the two being the one that counts. The numbers come in rows of 40, and you have to get a complete row right to score 40 points. One error or blank space in a row gets you 20, two or more errors and it's zero for the whole row. Which is a major loss of points in this one!
As with the other disciplines, you can stop part way through the last row you write down, and score for those numbers only in that row. 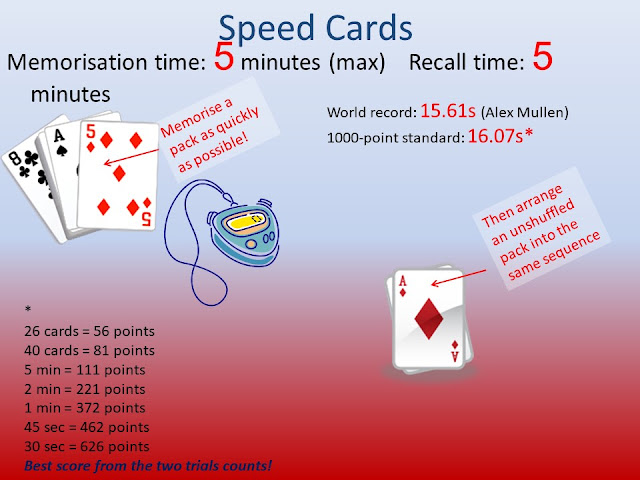 The classic final discipline of memory competitions! You get a pack of cards, and have to memorise the sequence as fast as possible. You get a maximum of five minutes, but can put the pack down and stop the clock at any time. Fastest time wins, as long as you recall all the cards correctly! This is done by sorting an unshuffled pack into the sequence of the one you've memorised, in the space of five minutes.
Posted by Zoomy at 7:06 pm No comments:

On the morning of Monday 20th, at the Mind Sports Olympiad, we have the Natural Memory Championship - the second part of the big MSO memory event. There's still time to register!

Possibly "natural" isn't quite the right word for this; it doesn't give enough credit to all the hard work and training that the memory masters do in these disciplines, but it's true that these ones are the bits of any memory championship where complete beginners have the best chance of getting a score that comes somewhere near to the scores achieved by the experts. 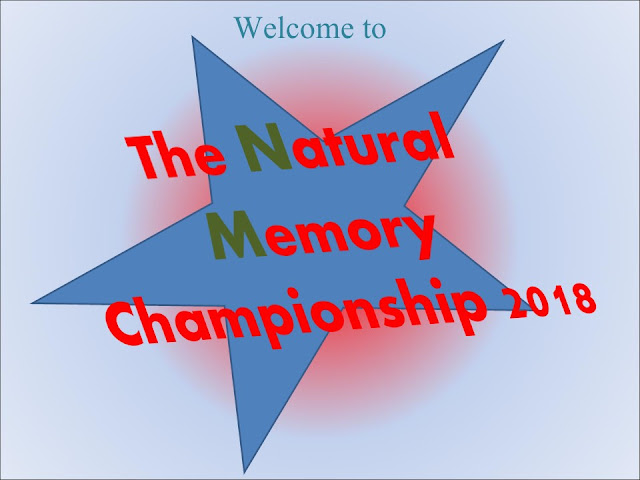 Do the N and M look like some kind of natural field of grass, with the other letters floating above them? Because that's the kind of effect I was going for... 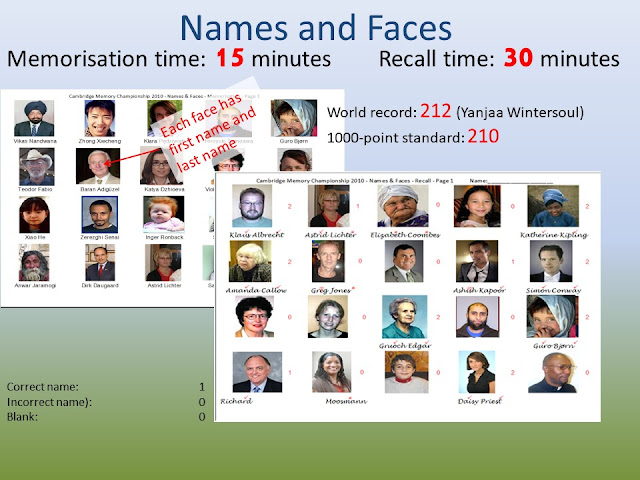 Names - and the names attached to these pictures of people's faces might not be ones you've ever seen before; they're randomly selected from all over the world, and will very probably be a first name from one country and a last name from an entirely different culture, attached to a face that looks like it comes from somewhere entirely different again. But unlike the numbers and cards, you don't have to remember them in any particular order - you just have to remember which names went with which face, and then fill in the names under the faces (presented in a different sequence) on the recall papers. 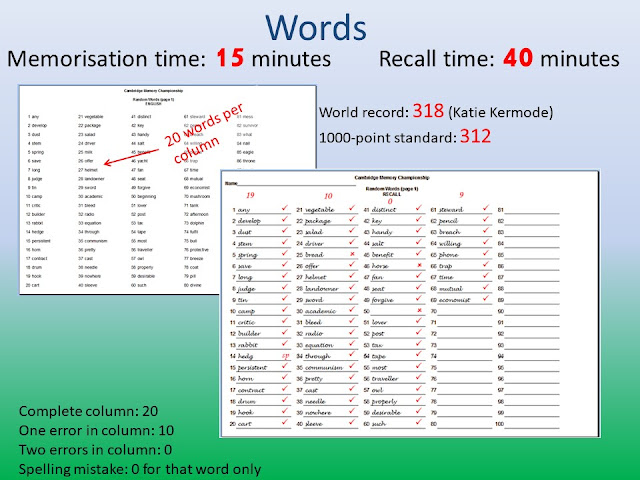 Words, on the other hand, you do need to remember in the order you're given them. Read down the columns; each one has 20 words in it (mostly concrete nouns, with a smattering of more abstract words added to the mix), and you need to get them all right to get a score of 20 for the column. One error reduces the column score to 10, two errors and it's zero. But a simple spelling mistake just loses you the point for that word, so reducing it to 19 as in the first column above. For the last column you complete, you can fill in a partial list, and for example score 9 points for writing correctly the first 9 words. 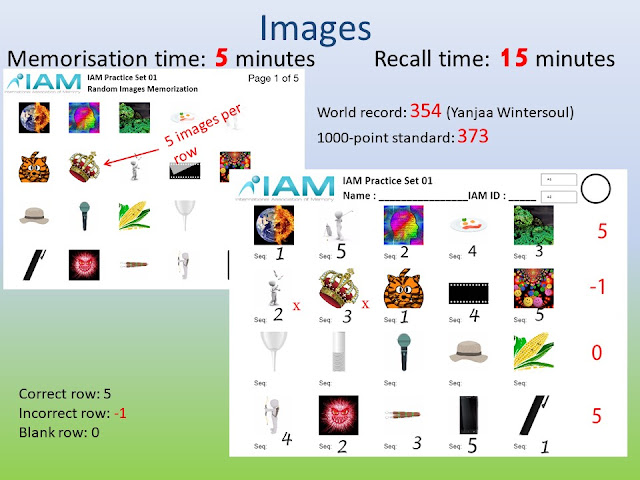 Images, which will be random pictures like the ones above, come in rows of five, and you have to remember the sequence of each row. The recall page will show each row with the images in a different order, and you have to fill in the numbers 1 to 5 underneath them to represent the original order. Five points if you get a row correct, you can leave a row blank without penalty, but if you fill one in with a mistake, there's a penalty, minus one point. So in the picture above, someone's scored 9 points from the first four rows.

They've also forgotten to fill their name in at the top of the page - everyone should always make sure to do that.
Posted by Zoomy at 3:29 pm No comments: