There are a couple of trouser-related things I felt that I should record in my blog. Because let's face it, there isn't nearly enough information on the internet about my trousers, and we urgently need to redress the balance.

On Thursday, as part of the team-building exercises that have been taking up a lot of my time at work lately (and which I won't comment on in case someone from work is reading this), we went out to a pub for lunch, and I had the hottest, fresh-from-the-microwave lasagne I've ever been stupid enough to put in my mouth. "Gah! It's melting my tongue!" I quipped after noticing the temperature just after putting a forkful in my mouth, much to the amusement of my colleagues. I then put my knife down in a way that somehow caused it to cartwheel up in the air and flick a huge amount of lasagne down my shirt and onto my trouser leg. "Gah, now I've got lasagne all over my trousers!" I observed. "AAAAAH! BOILING HOT LASAGNE!" I then yelled quite loudly as the temperature penetrated the thin fabric and forced me to wipe it off in a painful panic. Really, you can't take me anywhere, and my boss would be well-advised to remember this in future.

Another thing about my good work trousers is that there's a big hole in the bum, and people were starting to notice it at the office. So today I put on my best casual trousers (which incidentally have an even bigger hole in the bum) and went to the finest purveyors of clothing in Nottingham (excluding shops that don't give all their proceeds to cancer research) to buy myself some new ones. I found a nice and stylish pair of work trousers in a shade that matches my jacket, and a good pair of casual jeans-type-things-that-aren't-technically-jeans-as-such to wear in non-working situations. However, the latter turn out to have huge holes in both pockets, so I either need to fix them (not really going to happen) or only wear them on occasions where I don't need to carry any money, keys etc with me.

I would take them back to the shop and ask for my £3.65 back (along with maybe an explanation of how they chose that weird price), but the till was manned today by a woman who seemed to be in her eighties and who couldn't work the fancy electronic till, despite the alternately helpful and unhelpful instructions from two other workers crowding around her, so the simple sale transaction took about half an hour and I dread to think how long a refund process would have taken.

Still, a woman in Burger King recognised me from the telly and said hello, without even commenting on the state of my trousers, so perhaps I'm just attaching too much importance to the role that trousers play in every aspect of my life.
Posted by Zoomy at 9:03 pm 2 comments:

My bank saw fit to stop my debit card working, because I'd gone to Sweden without telling them and spent somewhere in the region of £25, so they assumed my card had been stolen. I did explain that going into the bank and explaining that I'd still got the card had caused me a lot more inconvenience than I would have suffered if the card had really been stolen by Swedish master criminals, but they assured me that the swift and decisive action by the fraud team (judging by the phone call made by Charlotte at the bank, this team is based in India and speaks very little English) was for my own protection and I should be jolly well grateful. I feel like I ought to demolish the bank with a bulldozer or something, just to show them how annoyed I am. I'd close my account and move my money somewhere else, but I'm pretty sure that every bank in the country uses the services of the same non-anglophone fraud team.

Also, there's a TV advert for Andrex that describes it as "soft, strong and unbeatably long," with small print at the bottom of the screen saying "excluding longer lasting/double roll products". So, it's unbeatably long if you exclude anything that lasts longer? I'm going to describe myself as the world memory champion, excluding those with better memories, from December onwards!

And what's more, it's the weekend and a friend in America has sent me DVDs of all but two episodes of Pocket Dragon Adventures to watch! And I've got the other two on video, so as and when I get round to working how to convert videos into DVDs, I'll be able to circulate a complete set around all the other Pocket Dragon fans in the world! (Except that there are only the two of us, as far as I know)

I know that last one wasn't really a complaint as such, but I wanted to finish on a more cheerful note.
Posted by Zoomy at 8:40 pm 3 comments: 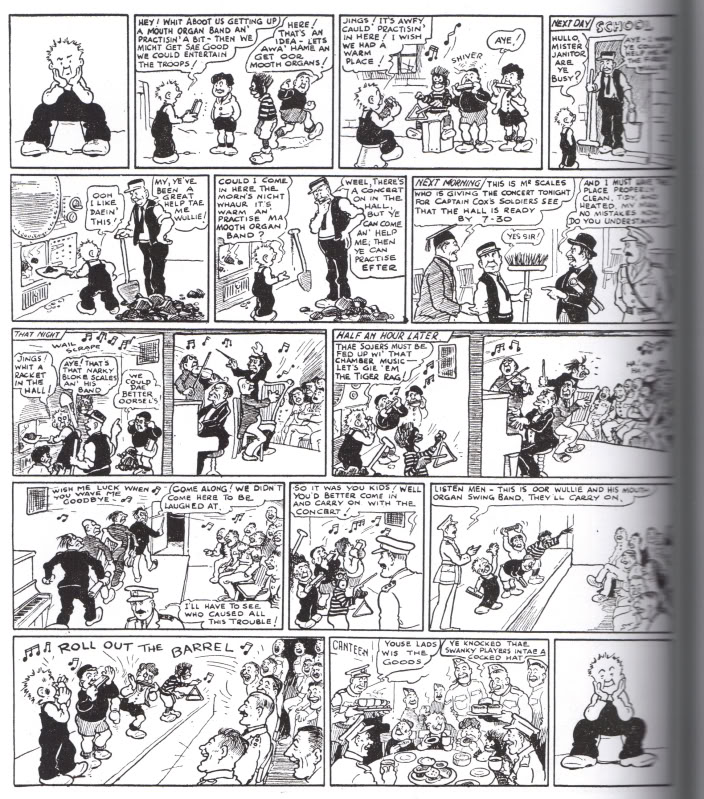 I mean, really. Is this any the more acceptable for tippexing out the words "Hold dat tiger"? Judging by how often it shows up in Betty Boop cartoons, the Tiger Rag was a very popular tune of the time, and I hadn't really thought of it as being one with any racial connotations until I saw this comic. But the inclusion of a black kid in this one is interesting, because by this point Wullie's gang had settled down to just Bob and Soapy, and we very rarely saw them hanging out or forming bands with anyone else. For a while, a year or so earlier, it looked like Joe (who wore glasses and a flat cap) would become a permanent sidekick, but he didn't quite have enough staying power, and the gang remained exclusive until Wee Eck muscled his way in a bit later on. And nowadays, political correctness being what it is, Primrose is a fully paid-up gang member too - how long before Scotland's modern multi-ethnic society demands representation again?
Posted by Zoomy at 8:13 pm No comments:

The Glass Box of Gothenburg

So, I flew into Landvetter airport on Friday afternoon, to find someone waiting for me with a sign saying "Mr Ben", who chauffeured me to the tournament venue. As venues go, it was just plain awesome - just inside the main entrance to a gigantic book fair full of people who crowded around our glass box to watch what we were doing. It was like being in a zoo, or at least in the kind of zoo that Ayumu lives in. There was also full coverage in Swedish newspapers and radio broadcasts and things, so perhaps everyone in Sweden will want to take part next year!

Here's an interesting thing about Sweden, incidentally - they show a lot of British and American programmes on TV over there, subtitled. And funnily enough, on the Simpsons, even Bumblebee Man's Spanish is translated into Swedish! So any watcher unversed in both languages would think that Bumblebee Man is speaking the same language as all the other characters.

Anyway, suffice to say that I was hopeless all throughout the competition, much as I'd expected. And Simon Reinhard was entirely non-hopeless, so he beat me hands down. This is probably a good thing for me, because while I was generally poor in London, I didn't have any complete disasters, and I did have at least one in Gothenburg - in ten-minute cards, I tried for eight packs and ended up only getting one.

They arranged the speed cards for maximum spectator entertainment, with me, Boris and Simon in one group, lined up in front of the glass windows, and all the others (nine of them) thereafter. It was still technically possible for me to win if I did under 30 seconds and Simon didn't memorise anything, but we all just went for fast times without any of this namby-pamby "playing it safe" stuff. However, we possibly disappointed the watching masses when we all three of us failed to remember a pack of cards twice in a row. They were cheered up again, though, when Swedish newcomer Florian Minges did a pack in an extremely groovy one-minute-nineteen or so.

Full results can probably be found on the all-new statistics website here, along with the world ranking list and all the awesomeness of statistics from 19 years of memory competitions!

I must say, that I'm really hugely fired up, enthusiastic and motivated today... about playing the ukulele. Last night has really put me in the mood to be musical. I don't seem to have any enthusiasm about memory training, though...
Posted by Zoomy at 7:01 pm 4 comments:

A lapse of memory

Actually, my account of the Swedish memory championship will have to wait until tomorrow, because I'd forgotten that tonight's the night I was planning to go to the first meeting of the Nottingham Ukulele Club. Who would have thought that there were so many people in Nottingham who are interested in ukuleles? The room was jam-packed! I'll become a musician yet!
Posted by Zoomy at 9:46 pm 1 comment:

My account of the Swedish Memory Open will have to wait until tomorrow, because it's late, but the innovative venue in the middle of Scandinavia's biggest book fair certainly got us more spectators than any memory competition in history! It's just a shame I was so rubbish, really. Still, I picked up enough Swedish from all those books to be able to communicate with any Swedish dog (voff! vov!) or cat (mjau!). Next time I visit, I'll try to improve my grasp of the language to two-year-old human levels.
Posted by Zoomy at 9:25 pm No comments: