Christmas is coming, the Zoomy's getting fat

The whole diet thing seems to have gone out the window this last month or so. I'm eating sweets and junk food more or less constantly at the moment, and I really ought to stop. Maybe I'll make a resolution. Or, and I think this option might be more fun, I'll try to find a way to make everybody else in the world over-eat to a much greater extent than I do, so I can still eat whatever I want, but I'll look comparatively thin!
Posted by Zoomy at 10:52 pm 2 comments:

I tried to find a link to watch tonight's Central Tonight online, but it doesn't seem to be working at the moment. Still, if you do manage to watch it somehow (my bit is around the middle, fifteen minutes or so into it), you'll have the pleasure of seeing me in my suit and tie (plus hat), since I filmed it very early this morning before going in to work. And the sight of me memorising things in my work clothes really doesn't happen very often, so Zoomy-collectors will really treasure this one.
Posted by Zoomy at 7:19 pm 3 comments:

If you're in the Central TV region, watch the local news at 6pm for more fun with me and Sainsbury's. Also, while you're at it, go and watch that old clip of me on Central Tonight a couple of years ago, on YouTube. That's my favourite one on there.
Posted by Zoomy at 12:34 pm No comments:

I'm getting up at some time before the crack of dawn tomorrow, to film some more supermarket-themed memory fun with Central News. And possibly an interview on Radio Nottingham, but I'm not sure about that - I spent most of this afternoon emailing the Sainsbury's person and the Radio Nottingham person on the subject (I didn't want to do it, because I've got a real job that I've been neglecting lately, but Sainsbury's begged and offered me food hampers) until I finally asked them to please sort it out among themselves. I should really have added "... and tell me whether or not I'm going to do a radio interview tomorrow morning", but I didn't, and they didn't, so I don't know. Never mind.

And after that, I'm going to stop blogging about memory and Sainsbury's every single night. It's time to move on to other subjects, I'm sure you must all be as bored with this theme as I am.
Posted by Zoomy at 9:21 pm 2 comments:

It's the sound of Lincolnshire, that special place to live

I grew up listening to that catchy jingle, although I don't think they still use it nowadays, and they almost certainly don't play it on Radio Solent, which serves Hampshire, Dorset and the Isle of Wight. But despite this, my appearance on Jon Cuthill's morning show was good fun. Click on that link to hear it, about two hours and ten minutes in (you're allowed to fast-forward if you want). He even had me memorise a pack of cards, live on air (which doesn't sound terribly impressive when you're doing a phone interview on a radio show, but I really didn't cheat. I did only memorise the first dozen or so cards, because I knew he wouldn't ask me them all, but I didn't cheat!). And he gave me thirty seconds to memorise it, thirty seconds of dead air, which I didn't think radio presenters were really supposed to do. Most radio people don't want me to do cards at all...

I do enjoy this kind of thing, though - perhaps I should try to spread the word to local radio stations that I'm available for interviews, free of charge, if they want. They don't have to wait until Sainsbury's tell them to interview me. Radio Derby always tell me to tell them when I win a memory competition, and I never do because I disapprove of self-publicity, but perhaps I'll change that policy.

You're listening to BBC Radio Solent

Well, in all likelihood you're not right now, but if you do tomorrow at 11:40, you might hear a brief interview with me, as a follow-up to the Sainsbury's thing.

I can't actually remember right now exactly where the Solent is. Should I look it up before tomorrow, or just hope nobody tests me?
Posted by Zoomy at 9:48 pm 2 comments:

Inside the head of Zoomy

This is a picture of the screen of the brain-scanning machine in Tokyo: 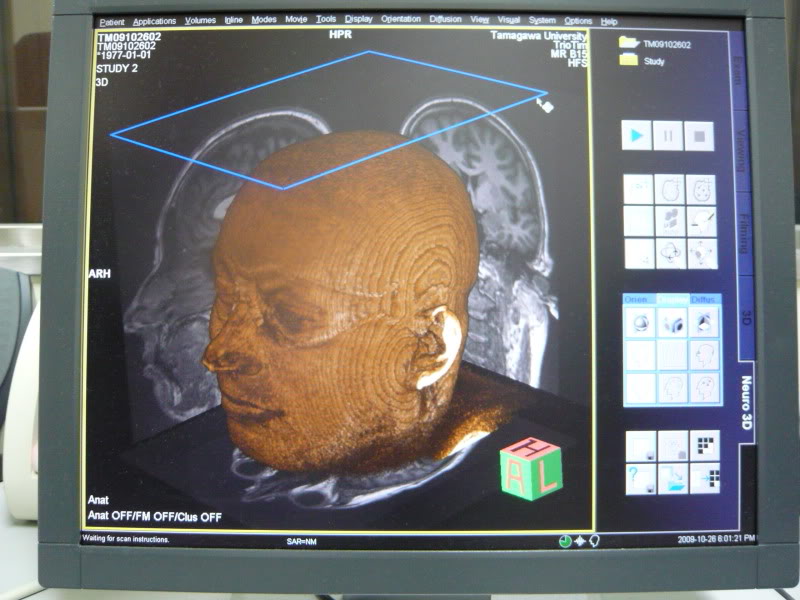 Actually, that's the outside of the head of Zoomy, but you could slice cross-sections of it by careful clicks of the mouse, to examine the brain inside. The marks around my eyes are the space-age goggles I was wearing instead of my glasses, by the way.

The Japanese TV people want me to go back there in January, to do some more memory things in the studio! Hopefully it'll be possible to arrange it - I've only got two more days of holiday left after my Christmas break, but that's probably enough to make a flying visit to Tokyo. I have also supposedly won a trip to Bahrain as a prize in the WMC last month, but nobody's replied to my email about the details of that, so I assume there's no time limit on the invitation to go out there and be shown historic buildings. I was thinking of sending someone else, disguised as me, anyway - it can be my Christmas present to anyone out there who looks a bit like me and likes the idea of historic buildings in Bahrain.

As everyone knows, I'm also bad at replying to emails myself, so I've spent this evening catching up with all the various queries about memory techniques I've had in the last couple of weeks. There have been a lot of them, which serves me right for winning the world championship, I suppose, and most of them have been about how to use memory techniques to pass exams at university and things like that which I know nothing about, so replying to them is a bit difficult. I also had someone today asking for memory tips for her toddler.

Tomorrow, I will devote my time to typing up my transcripts for the Cambridge Christmas tournament, three weeks late, before Geoff summons his Viking hordes from Denmark and pillages me. And then email my brother, which is a full evening's work because we write long emails to each other, but at least that's fun rather than a chore...
Posted by Zoomy at 8:53 pm 5 comments:

Boris, in response to last night's blog, commented that it would be interesting to compare developments in athletics with those in memory sports. The fact that the winner of the 100m sprint in the first Olympic Games in 1896 did a sensational 12 seconds, for instance. Actually, there are other similarities apart from the gradual change in what is considered an exceptional performance - at the first modern Olympics, the athletes paid their own way over to Greece, the competitors were drawn from only those people who could afford the trip and who knew the event existed (C. B. Fry, probably the foremost British athlete at the time, didn't find out about the Olympics until after it had happened), and a lot of the rules and regulations were made up on the spur of the moment as and when they were needed. Memory sport is still very much in this kind of state at the moment, but if the Olympics can go from such humble beginnings to a really big thing, who knows?

Also, the 100m in those days was run from a standing start, on a dirt track, wearing rubber-soled boots and baggy shorts. The way they've improved on the basic principles of running in a straight line as quickly as possible is very much like the way we've improved on the way to memorise a pack of cards.

Actually, the comparison with swimming is even more similar. In 1878, when the first "world records" were published by the Amateur Swimming Association, the world record for the 100 yards freestyle was 76.75 seconds. The modern 100m record has knocked 30 seconds off that - helped by the development of "techniques" like the crawl (which was a brand new thing, distrusted by most Victorian swimmers, in 1878), swimming trunks instead of full-body bathing suits, holding swimming races in pools rather than the sea, modifications to the rules about diving starts, all the way up to the modern day and Michael Phelps's bionic body-suit (without which I suspect he'd drown if you pushed him in a swimming pool).

If there's one way in which memory sport is different (apart from the fact that it's a pointless mental exercise for people with too much time on their hands rather than a display of the awesome physical prowess of the human body at its peak), it's that the developments have been much more rapid, and the records have tumbled down much more dramatically. Who knows what will have happened in a hundred years? I hope I'm still around to see it, anyway...
Posted by Zoomy at 10:10 pm No comments: