I really prefer summer. One of these days, when I'm a millionaire, I'll spend winters in Australia or somewhere like that. New Zealand, maybe, because everyone goes to Australia and I wouldn't want to be accused of following the herd.
Posted by Zoomy at 8:07 pm No comments:

Oh yes, that's right, several times. So as someone who thinks the world always needs more muppets on television, I'm currently being cautiously optimistic about the new series, and basically trying to avoid hearing anything about it until it debuts on Sky the Monday after next. It might be really good, you never know.
Posted by Zoomy at 6:48 pm 3 comments:

Perhaps my recent blog posts have been a bit on the minimal side, but I've been working without a break for the last couple of weeks, covering for a colleague who's on a cruise. I'll have more time on my hands soon. Meanwhile, people might want to remember it's my birthday next Wednesday...
Posted by Zoomy at 7:49 pm No comments:

And I blame dieting. It never does anyone any good. Right, from now on, nothing but junk food!
Posted by Zoomy at 6:59 pm 1 comment:

Peanuts in the Seventies

Presenting part three of the brilliantly unnecessary feature on which characters show up the most frequently in the long-running comic strip Peanuts.

The lines here are a lot more messy than the sixties chart, and there are a lot more characters on it as we enter into a phase of more than just the regulars showing up - a lot of named characters figure into one storyline and then go away again. But we can see the comic strip by the middle of the decade settling on the eight prominent characters who would sustain it right through to the end at the start of the year 2000 - Snoopy, Woodstock, Charlie Brown, Sally, Lucy, Linus, Peppermint Patty and Marcie. The originals are still around, of course, but in very diminished roles - Shermy shows up only once in the 70s (and that's more of a probably-Shermy than a definite sighting) and Pig-Pen only twice. Patty, Violet and Frieda are relegated firmly to the background, along with the likes of 5 and Roy. 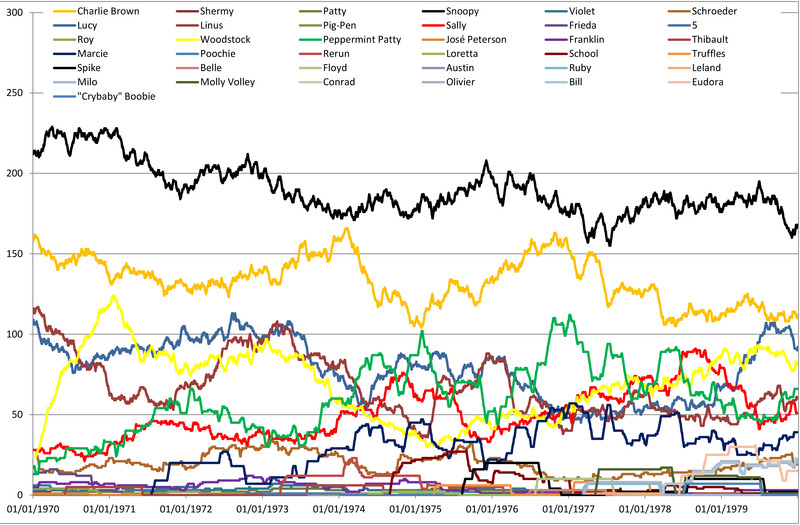 The seventies is Snoopy's decade. He's now the central driver of practically every storyline (and the strip now focuses on storylines, rather than one-off gags), with the others supporting him in his adventures. This reduces the role of Lucy and Linus from their heights of the 1960s, and leaves Charlie Brown clear in second place.

The first big "new character" of the seventies has actually been around for a while - in 1970, Snoopy finds out the name of "that annoying little bird" who's been hanging around with him lately, and for a while Woodstock is a constant presence. He fades away a little, but only a little, after a year or so, and stays around as his friend of friends' sidekick for ever after.

Peppermint Patty has been around for a while, and adds another other-side-of-towner to her gang in 1970, the wonderfully unpleasant Thibault, but she finally gets what she needs to make her complete in 1971, when she meets her ever-loyal sidekick Marcie. The two of them form maybe the greatest double-act in newspaper-comic history and a lot of their appearances are just the two of them, separately from the other major characters.

Rerun, the little brother of Lucy and Linus, is born in 1972 (though we don't see him till the following year) and sets a new world record for remaining as a seldom-seen background character before growing up and joining the central cast in the mid-nineties. It was a strange decision to add another Van Pelt to the dynamic, and I get the feeling Schulz quickly wished he hadn't done it, but it all works out in the end - there are some classic three-handed comics in the nineties that show what a great idea it was, all along.

Poochie, an old friend who comes to visit in 1973 and is surprised by how Snoopy looks now, is pretty forgettable, as is Loretta, who sells girl scout cookies. Neither of them stick around. 1974, though, sees the debut of the strangest Peanuts character - the school building. It communicates, sort of, with Sally on a regular basis - for the purposes of this chart, only strips where we see that particular corner of the building and it has thought-bubbles are counted as 'appearances', although any other strip set in the school could technically count as well. The school building commits suicide in 1976, but the line on the chart includes its replacement, and also Peppermint Patty's school when Sally temporarily goes there and talks to it, too. Plenty of other inanimate objects follow the school's example and have thoughts of their own as Peanuts gets increasingly surreal, but the school is the only one with a real personality and a sort of name. It's also probably what elevates Sally to starring role status - she becomes much more frequently seen at around the time she starts talking to the school, and takes her place in the big eight central characters.

Spike, Snoopy's brother, makes his debut in 1975, and he's a strange one. Though his first storyline involves him coming to visit, after that he goes back to live in the desert with just the rocks and cacti for company, and when he appears in a strip he's almost always the only character who shows up, entirely disconnected from the rest of the Peanuts cast. At first there's usually a framing sequence of him writing to Snoopy, but after that it's just Spike on his own again. He stays around for the duration of the strip, and we'll see more of him in the eighties. Snoopy's sister Belle shows up as well in 1976 (as does her son in one strip, though he doesn't have a name). Other siblings come along in later years as the dogs steadily elbow aside the humans and take over the comic.

1976 also brings us Floyd in the now traditional summer camp storyline of that year, and then 1977 gives us four short-lived named characters in the diminutive Austin, Ruby, Leland and Milo, who look up to Charlie Brown for baseball advice. Later that year we meet Molly Volley, Snoopy's tennis partner, who continues to make occasional recurring appearances (during tennis season) for many years.

In 1978 we get our first introduction to the Beagle Scouts - with Snoopy as scoutmaster, he leads a quartet of identical birds on expeditions. Their names are given as Woodstock, Bill, Conrad and Olivier. Since all birds who appear in Peanuts from the seventies onwards are physically identical to Woodstock, it's difficult to tell who's who. Generally (because I was sure you'd want me to) I've credited Woodstock with appearing in any strip with one or more unnamed birds, and Bill, Conrad and Olivier with also appearing in any Beagle Scout or Foreign Legion strips, even if their names aren't mentioned. It all gets a bit more complicated in the eighties and beyond, with new Woodstock lookalikes appearing, but for the seventies it's comparatively simple...

Eudora, Sally's sidekick, shows up for the first time in 1978 and hangs around quite regularly (sometimes as support to Snoopy's flying ace, too) for the best part of a decade. "Crybaby" Boobie, Snoopy's tennis opponent, also continues to pop up infrequently for many years to come.

Which leads me into a tangent about major characters - the really quite brilliant Peanuts Wiki considers seventeen characters to be 'major'; a list which (indefensibly in my opinion) includes Eudora but not Spike. Peanuts.com goes with a slimmer list of eleven (Charlie Brown, Snoopy, Woodstock, Sally, Lucy, Linus, Schroeder, Peppermint Patty, Marcie, Franklin and Pig-Pen), omitting Eudora, Shermy, Original Patty, Violet, Frieda and Rerun from the wiki's list. The website for the awesome-looking upcoming movie restores Shermy, Patty, Violet and Frieda to starring roles, and also adds the little red-haired girl (whose 'thing' throughout the comics and most of the cartoons was that she was talked about a lot but never seen) and newly-created-for-the-movie dog Fifi.

This just illustrates that the old characters from the fifties always get remembered by the nostalgia buffs, while the likes of Rerun (whose five years of fame were the last five before Schulz's death) always get ignored. Which is a shame, because the comics from the nineties were some of the funniest, if you ask me.

To my mind, the 50-appearances-in-a-year line on the chart above are a good indicator of who's a major character and who isn't. If you're showing up in the comic at least once a week on average over a lengthy period, you've made the big time. So my list of the thirteen major Peanuts characters would go: Charlie Brown and Snoopy (throughout), Lucy and Linus (mid-fifties until the end), Woodstock, Sally, Peppermint Patty and Marcie (seventies until the end), Patty, Shermy, Violet and Schroeder (in the fifties; Schroeder's unique in continuing to show up more rarely all the way to the end) and Rerun (late nineties). Spike peaks at 49, by my count, and Frieda at 46. Eudora, Franklin and Pig-Pen don't even come close.

Stay tuned for the 1980s as Peanuts moves into modern times - by the end of the seventies it's safe to say we've already met all the memorable characters, but the next decade does introduce us to Lydia, Marbles, and... Tapioca Pudding.
Posted by Zoomy at 8:24 pm No comments: