I went to Cambridge at the weekend for the European Grand Prix othello tournament. I don't feel like I've been to an othello competition for ages, although I'm not sure entirely why, since I did go to the nationals last year, which means the only one I've missed since then was the Christmas friendly, which nobody went to. But still, I've been out of touch with the othello scene for quite a while, and I've resolved to make an effort to go to more tournaments this year. Now that I've got a job that more or less means my income exceeds my expenditure, give or take, you know. Maybe I'll even try to win the British Grand Prix again by turning up to all the regionals? We'll see.

Anyway, this year's EGP event was held in the Old Combination Room at Trinity College. "The OCR", Cambridge dons call it, which doesn't give much clue as to why it's called that or what the room's used for when it hasn't had all the antique furniture shoved to the side to make way for board games. It's full of enormous portraits of Charles II and his friends, which Imre was at pains to point out are infinitely valuable and within easy reach of dirty hands, so please to be careful.

We had 19 competitors, eight of whom were the Plowman and Brand families but several of the rest of whom had come over from Europe. We also had Graham Brightwell, for the first time in yonks, and it was a very high-rated field. Not having played the game or even given it more than a passing thought for months, I wasn't expecting great things, but I got off to a flying start in the first round by virtue of there being an odd number of players and me getting the bye. Normal service was resumed when I actually played a game and got thoroughly squished by Roel Hobo, but then I beat Guy quite nicely in round 3 and had a game against Tom Schotte where I felt that I played really quite well, despite losing.

WZebra, the othello computer, usually disagrees with me when I feel like that about a game, but this time it takes the view that I only played one bad move, move 38: 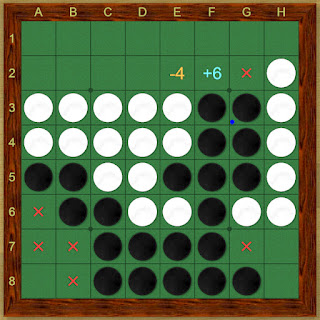 I'm white, and I played E2 rather than F2. My logic for this went along the lines of "if I play F2, he'll play F1, then when I play E2 he'll play G2 and this will be bad," but WZebra, smart alec that it is, says it wouldn't be bad at all, it would be perfectly okay in at least two different ways. Still, I take the view (slightly less scientifically, perhaps) that this isn't at all obvious and even players who actually know what they're doing might well have made the same mistake. I'm sure some of the good players out there will contradict me, but never mind.

Zebra reckons that I played another disc-losing move later, but we can safely ignore it there, because when it's in a losing position Zebra thinks the thing to do is to lose by as few discs as possible, rather than to play the move that gives the opponent the most chances to make a mistake.

So all in all, I was pretty happy with the morning's games, Then we had lunch and it all went a bit downhill from there, although I did beat Marie in between playing dreadfully and losing to Jan and Graham. I was thinking at the time that I always play terribly against Graham; I think I'm sort of overawed by how great he is, somehow. I don't get that feeling with the likes of Imre, but Graham just has that air of being-better-than-me that I find hard to overcome, don't ask me why.

Then we went for the traditional Indian meal on the Saturday night, which was very nice, and I went back to my hotel - Stationroomz, formerly known as Sleeperz and Cityroomz, seems to have closed down forever, but to make up for it there's a whole new area sprung up behind the train station with a Travelodge, bowling alley, cinema, supermarkets, Subway and no end of other brand shiny new stuff, so I stayed there. Not spectacularly cheap, but it was the first weekend for months that I had any money at all to spend, so I didn't mind splashing out.

Sunday was the day of the Cambridge half-marathon, so to get to Trinity in the morning we had to navigate big fenced-off sections of the city centre - I didn't see any runners, but I'm sure they showed up at some point. Having got a measly three points from seven games without playing any of the little Brands or Plowmen, I was expecting a few more easy games among the last four, but ended up against Luke Plowman first - can't really call him little since he seems to be taller than me now, and certainly not easy either; I was lucky to get a 37-27 win. I did get to play two small Brands, sandwiched around a loss to Marc Tastet (he was trying to get as many discs as possible in order to finish second on tie-break but probably would have won more easily than he did if he'd just been trying to win) and ended up on 6 points out of 11 games. Not world-beating, but just managing the 50% that I aim for in these things, even if you exclude the bye.

Maybe I should aim higher, but then I'd only be disappointed. Or I could practice a bit, but that's just being silly.

Anyway, Tom ended up in first place, followed by Takuji beating Marc on tie-break, and Roel in fourth. Marc won the third-place match, and the best-of-three final (which I didn't stick around to watch live, having to get home) was extraordinarily epic! Takuji won the first game 33-31, the second was drawn 32-32, and then Tom won the third by 33-31 - thus becoming the champion by having finished first in the 11-round tournament. That's computer-like levels of perfect play there, I can't help wondering how long it'll be before every game between the top players is 32-32...

All in all, a fun weekend! I really must do that more often. Oadby in a couple of weeks!
Posted by Zoomy at 7:32 pm No comments: