Wow, that was good

It's been nothing but memory-talk here on the blog for the last couple of weeks, so let's move to the physical side of things - WWE offered former subscribers like myself three months of the WWE Network for 99p with no commitment, so I availed myself of it to watch the Greatest Royal Rumble. It's their big showpiece to sell the whole wrestling thing in the Middle East, I assume (live from Saudi Arabia), but as a sideline, a good way to entice European viewers too, with a five-hour spectacular starting at 5pm on a Friday night, British time.

78 "superstars", by my count, if you include not-really-wrestling-but-participating people like Paul Heyman, were all shipped over to Jeddah along with Mr McMahon and the usual crowd of commentators, referees and so forth. No women, obviously - the WWE's idea of presenting women is sort of diametrically opposed to Saudi Arabia's, but perhaps one day they'll both find some kind of mythical middle ground between the two and join the halfway-sane parts of the world. In the meantime, without the traditional abysmal women's match, it was non-stop action from start to finish! And I was very impressed by how much character the many wrestlers managed to put across in a show with a minimum of talking!

You can forgive the occasional bad bits, like the hopelessly confused ending to Roman Reigns and Brock Lesnar, because for the most part it was enough to keep me entertained all the way through, which is saying something for a five-hour marathon. It's enough to get me back into watching WWE, or at least it would be if the WWE Network allowed you to watch Raw and Smackdown replays in this country - Sky TV keep a jealous hold on them. So I guess I'll have to wait until I start paying for normal-TV again before I become a full-time wrestling fan. Great 50-man Royal Rumble, though! If you didn't watch it tonight, at least check out that part, if you can.
Posted by Zoomy at 10:25 pm No comments:

No, good sir, I'm on the level

While watching the action from Gothenburg on Sunday, I entertained myself by creating a spreadsheet to quickly calculate IAM levels when you copy the scores from the stats website. Having added everyone to the list, I think there are 15 illustrious people who have reached level 20: 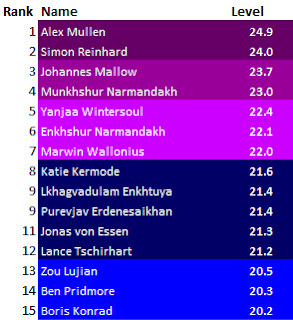 Memory legends, one and all! It'll be interesting to see who else gets up that high or higher over the next few years...
Posted by Zoomy at 8:42 pm No comments:

All hail to the champion

Finishing off with a perfect 50 words in 52.70 seconds, Simon wins the Scandinavian Open! Followed by a great second place performance from Sylvain, with Jan-Hendrik winning a thrilling third-place match against Marcin!

All in all, it sounds like an amazing event, in the unusual surroundings of a shopping centre in Gothenburg! Count me in, next time!
Posted by Zoomy at 4:01 pm No comments:

One thing I forgot to mention yesterday (I'm really not good at remembering things about memory competitions) is the new world records and amazingly great results at Memory League disciplines - Simon blew people away with 17.77 seconds in cards and 16.85 in numbers; Jan-Hendrik did an astonishing 45.09 seconds in names; Marcin topped the charts with 16.81 in images, and though we didn't have any perfect 50s in words (it's very difficult to do), those three each did a 46 in the course of the first day.

They're currently at lunch on day 2 - when they resume, the semi-finals will Simon against Jan-Hendrik (could be epic - if J-H is the names/words master then Simon is at least the vice-master, if there is such a thing, and definitely the master at cards and numbers), and Marcin against Sylvain (also epic, because Sylvain's definitely got the beyond-expectations-underdog vibe going now)! Stay tuned!
Posted by Zoomy at 12:36 pm No comments: