In many ways, I am Groot. By which I mean, I'm somebody who refrained from watching Marvel movies, on the grounds that superhero movies generally aren't very good. I might just have been mistaken about that, but be fair, I'm old now, and I stand by that opinion as it relates to all superhero movies made before 2008.

Even so, it took a combination of circumstances to persuade me to give them a try. For one thing, I really loved Infinity Gauntlet and its many sequels when the comics first came out. I was hugely into Warlock and the Infinity Watch for a while, even if with hindsight it was pretty rubbish. Possibly you just had to be there. Possibly I hadn't read enough GOOD comics at that time. After reading Thunderbolts in 1997, Warlock definitely lost his (orange) lustre. But to a teenager with a limited experience of good superhero comics, it was pretty awesome, so I'll always have a soft spot for it.

And then I saw someone share a hand-drawn flow-chart on Facebook showing how the 19 Marvel Cinematic Universe movies connect together, and it stimulated my nerdy impulses. With all appropriate credit to "Geek Out Huntsville" and whoever doodled this thing... here's a shining example of how to persuade me to do something: 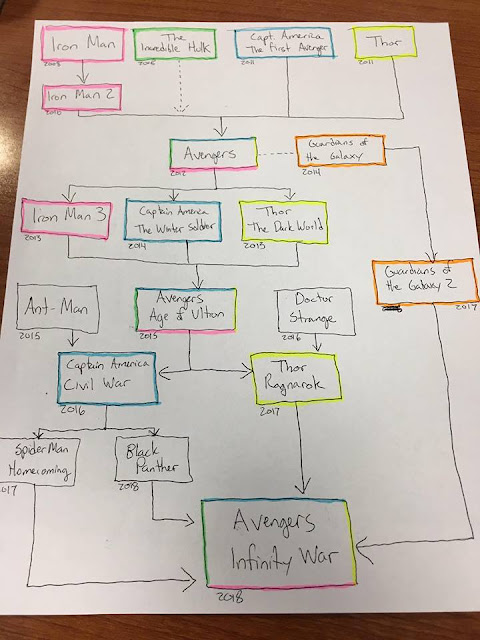 Seriously, how could anyone resist something like that? So I bought seventeen DVDs, and every evening for the past three weeks, I've watched a superhero movie. Except last Saturday, when I was doing something else. And I capped it off today by going to the cinema for the first time in years and watching Avengers: Infinity War.

[Yes, Black Panther isn't available on DVD in this country yet. Yes, I illegally downloaded it. Sue me. I'll buy the DVD as soon as it comes out, in a couple of weeks. I feel entirely morally justified in this.]

Yes, I really really love the Marvel Cinematic Universe! Even despite occasional clunkers (Thor: Ragnarok), the whole wonderful system of interconnecting adventures totally blew me away. It's genius, pure and simple, and I can't get enough of it. Every new movie from now on, I'm first in the queue, probably having watched all the previous DVDs again to refresh my memory for it. Heck, possibly even buying new copies of the DVD and/or sending any spare cash I find lying around the place in an envelope to Hollywood, because I don't feel like I'm rewarding the awesome people who make these films enough by just paying for them the once!

It's a good thing, really, that I wasn't watching them from the start. Iron Man is okay, Hulk is pretty good, Captain America is fun, but it was a sort of slow and uncertain start for the interlinked universe - it really only came together properly with Avengers Assemble [note to foreigners - that's what it was called in this country, so as not to offend John Steed and his partners. They're easily offended.]. That's where we really start to get the sense that not just the world, but the whole universe is one big picture, and we can get to see a little bit of it at a time with every new movie. That's the point where at least two movies started coming out every year, too, because who could bear waiting a whole year or more before the next one?

The universe really moves from good to great with Guardians of the Galaxy in 2014 - hilarious, brilliant and thrilling and exciting too! And a fine example of how the whole thing can move away from adapting old comics - just pick a bunch of forgotten space-themed characters from Marvel's long history, put them together and do something fun with them!

And then we get Avengers: Age of Ultron, which might still be the best movie of any kind I've ever seen, ever. But then, I've always been a sucker for Joss Whedon. And the MCU kept up the pace with Ant-Man, and then Captain America: Civil War, which was especially gratifying, because it was so very good when the Civil War comics were pretty atrocious. But this treatment of the same basic idea really made sense, and produced a masterpiece!

Doctor Strange didn't really capture my imagination very much, but Guardians 2 was that rare thing, a sequel just as good in every way as the first, if not better. And Spider-Man: Homecoming was nothing short of awesome! Never yet has anyone managed to capture the essential feel of the early-sixties Spidey comics that made the character so popular in the first place, until this film finally gets it right! I love it. An inspiration to teenage heroes everywhere.

As I said before, Thor: Ragnarok is the one that really didn't work - you just can't help wishing for the serious drama it was obviously originally conceived as, buried beneath some laboured attempts at comedy. Still, we all make mistakes, and Black Panther (deadly serious, that one, maybe even a little bit too much so) gets things right back on track again, all building up to Avengers: Infinity War.

And (slight spoilers coming, by the way - now that I've seen it, everybody else has no excuse for not having watched it yet), this is the whole universe in one film. I'm pretty sure nothing so epic has ever been attempted before. Despite my aforementioned nerdishness and compulsive desires to count things, I can't even enumerate how many established characters show up in this one, all contributing something significant and playing their own part in a galaxy-spanning adventure! The way it cuts between different conflicts going on at the same time, all part of the same whole, is breathtaking. Few people will get the reference, but it's Space Thunder Kids, only a real movie that makes sense!

And the ending is genuinely awesome. What's going to happen next? I'm a fan now, anyway. Without the extensive baggage that the comics have, and the ability to apparently do absolutely anything with special effects nowadays, it's official - superhero movies are better.
Posted by Zoomy at 3:46 pm 1 comment: