As if my life wasn't stressful enough!

I'm REALLY on the point of a nervous breakdown at the moment - after a whole lot of stress about the preparations for next weekend's memory competition in London (in the course of which I've been needlessly rude to people and caused no end of offence, probably), and then finding out yesterday that next week we've got the big Ofsted inspection at work, which will involve me in a whole lot of extra short-notice number-crunching, probably, NOW I find out that I'm on telly on Wednesday night!

Please don't tune in to ITV at 10:45 to watch How To Remember Everything, narrated by Mr Brown from the recent Paddington Bear movie, Hugh Bonneville (I think he was in Downton Abbey, too, but I think my blog-readers are more the Paddington Bear type). It's the stuff they filmed leading up to the 2014 World Memory Championship, I thought the whole project was long gone and forgotten!

Maybe it's just my state of mind right now, but I'm really quite terrified that the director, annoyed by my habit of making extensive pronouncements about my beliefs and principles and then telling him I'm not being serious and he shouldn't put it in the documentary (as I recall, I did that quite a lot), has dedicated the last two years to making me look bad.

This is quite possibly paranoia on my part. It would take five minutes to make me look bad, and two years to make me look good. But still, nervous breakdown. Big time.
Posted by Zoomy at 8:56 pm 1 comment:

Any British business that talks about "Black Friday" needs to be burnt at the stake and told not to be so American in future, unless they've provided all their customers with a day off work and a roast turkey dinner the day before. It's just not on, I'm afraid.
Posted by Zoomy at 5:34 pm No comments:

I've just noticed that my last post was my 2500th on this blog! Talk about quantity over quality! I should have done something special to celebrate it, really, but at least it was a forward-looking post about what I'm going to do in the future.

I also need to keep up a daily blogging routine for the rest of the year if I don't want to fall below 100 posts in 2016, don't I? I'm sure I'll think of something to write about - I've still got my latest randomly-selected comic to talk about, I'll get round to that shortly, although it's not even a particularly good issue of Viz...

What's comic number 2500? West Coast Avengers #24 - that's a pretty good one, actually! Maybe I'll write about that, too. What else have I neglected while I've been doing nothing but memory competitions? I'm sure I'll think of something. I meant to summarise the latest season of Red Dwarf, since it's the only "new" TV thing I've been watching lately, I'm sure you'd all be fascinated by that. Then I could recount the putting-a-red-towel-in-the-washer-with-my-work-shirts incident of the other day. They look better pink, actually.
Posted by Zoomy at 5:45 pm No comments:

It's almost time to forget about memory for the year (just a few world championships and things to go...) and concentrate on what's happening in the glorious future world that is 2017!

For me, anyway - I really would like to get properly into competitions again. And I think the only way to really do it is by going around the world as much as possible and competing. It's sort of backwards, but competing is the only thing that really gets me fired up to prepare to compete. So I'll look around and see what's happening within easy commuting distance and plan my holidays accordingly!

Back in Britain, I've resolved to play a part in arranging lots of competitions already - I think the Friendly Championship does have to continue, and I think one of the May bank holiday weekends is the best time for it to happen. Maybe have another Numbers and Cards on the following day, if people want one. Location-wise, I'll have to see what I can arrange, but somewhere in the Birmingham area is most likely, though Broneirion would be nice if they somehow don't have a wedding or something on every convenient weekend. In August we'll have the big two-day competition at the MSO in London, and then in November another Memory League Championship would be wonderful; that one I'm eager to compete in myself and let someone else take charge.

That's a nice every-three-months schedule, don't you think? Should there be one in February too, just to keep the pattern? No, let's go with a new policy of announcing them far in advance and preserving the traditional 'winter break' in memory...
Posted by Zoomy at 7:16 pm No comments:

A Memory League Of Her Own

It really was a great competition! All the results of the first-ever UK Memory League Championship can be seen on the website, courtesy of the ever-wonderful Simon Orton keeping it all running from half the world away. I love living in the future, I really do.

Katie Kermode was as unbeatable today as yesterday - after three 3-0 wins in the group stage, she brushed aside Dan, Marlo and Nelson 3-0, 3-0 and 4-0 in the final to wrap up a commanding performance. I didn't expect it to be quite so one-sided! We are most definitely going to do it again next year, and what's more I'm going to be a competitor next time. I've absolutely resolved to do it, so it'll happen. We invite applications for the important job of "surprise task creator and general show-runner"!

The surprise tasks were a lot of fun - firstly, we had what I called "Visual Memory": 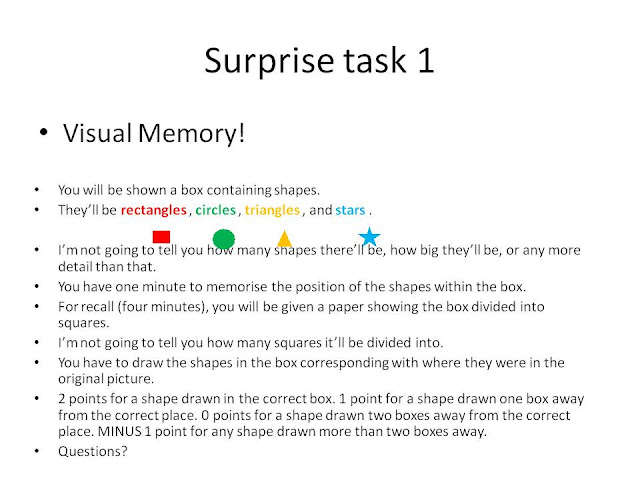 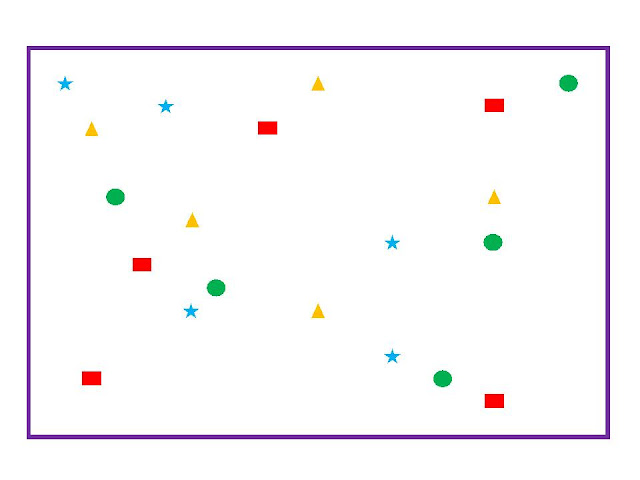 The recall grid was 23 by 17 - I suspect everyone was expecting a nice round number, so it was good to keep them guessing. People's approaches differed. James Paterson had the particularly clever idea of leaving his recall paper blank and trusting his opponent to make enough mistakes to end up with a negative score. It didn't work with Nelson, but it would have beaten Dan and Clay! Katie top-scored, unsurprisingly enough, but with a top score of 8 points, it just goes to show how tricky something like this is, when you have to make up a system on the fly - ten minutes' strategising time is all they got before being thrown straight into these things!

Surprise task 2 got a nice lot of laughs - Intergalactic Names and Faces! 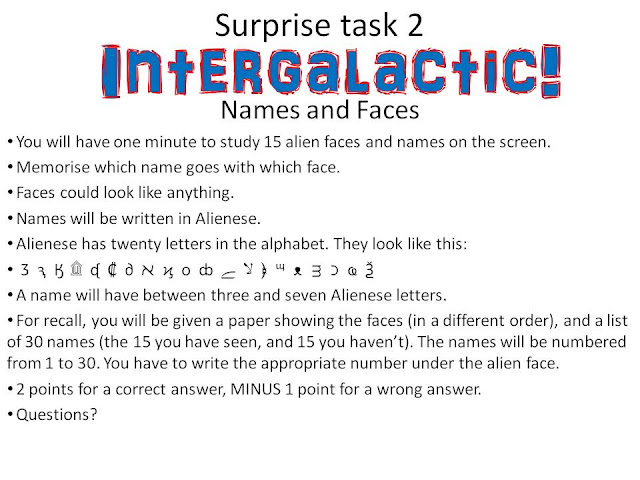 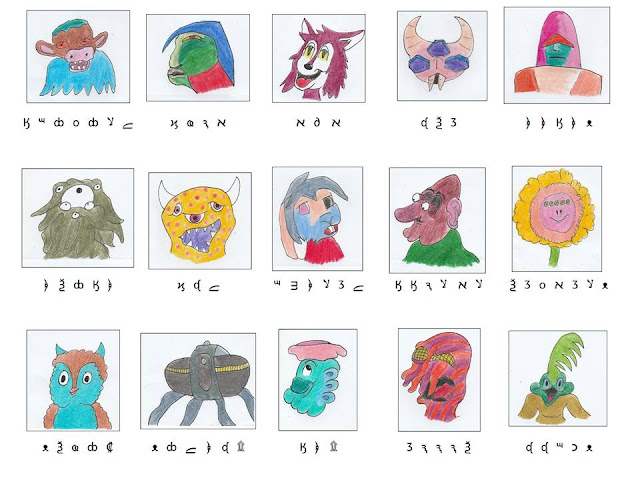 Katie top-scored again, to nobody's great surprise - Clay's response was the best; in a subsequent 'normal' names round, he filled in a name he'd forgotten as "alienese ben jesus". Yes, I drew the pictures myself.

Surprise task 3 was a bit more boring, but good for promoting Peak - it was the "Baggage Claim" game from their excellent app, with the additional twist of timers; fastest one wins. Katie won, naturally. Everybody needs to find a way to catch up with her!

I'll work on my memory, but it might be a hopeless task - for example, I'm pretty sure I left the speed stacks timers for the aforementioned game lying around in Peak's office...

Big thanks and congratulations to all our British competitors - Phill and Jake were there to watch the fun as well, so it was a gathering of unprecedented British-memoriness! Cheers once more to amazing winner Katie, amazing innovator Nelson, amazing sponsor Peak, amazing creator Simon, and all the rest of you amazing people!
Posted by Zoomy at 4:40 pm No comments: