What do you think I've been doing all day today? Well, I'll tell you, we won't make it a guessing game (because you'd probably guess no end of appalling things, I know what you're like). I've spent all day doing practice runs of each and every discipline from the upcoming Canadian Open! Yes, all ten of them! I shudder to think how long it's been since I did a full national-standard memory competition in one day. It's the kind of thing that doesn't happen much nowadays; people tend to split the real events over two days, unless they're very cool people like the organiser of my Friendly Championships.

But in days gone by, I used to happily spend an entire Saturday doing memory training. It would more usually be the hour disciplines, but let's take things one step at a time. My scores were pretty terrible, and by the time I'd got to the spoken numbers my brain was absolutely good for nothing, despite which I'm happy about today. I haven't actually done any paper-based memorising since the French competition last year, not even in training. In fact, looking at my handwriting in the words discipline, it occurred to me that I never write with a pen any more! Paperless offices, emails, phones, they take away your ability to write. I need to practice my penmanship a little before I get to Canada, just to make sure my words are halfway legible.

Once I get to Canada, incidentally, I need to find a way to get from Edmonton to Westlock. It's 45 miles, apparently, but Westlock doesn't seem to welcome visitors who use public transport - the internet suggests the best thing to do is get a bus to a middle-of-nowhere place nearby and then a taxi the rest of the way. I'll see if I can hitch a lift with a competitor or passing lorry-driver. I don't really want to go to the trouble of hiring a car and having to remember what side of the road they drive on in Canada.
Posted by Zoomy at 8:14 pm No comments:

Back to school again

I don't mention nearly enough that I went to school with Robert Webb. It's an important claim to fame, you know. Nobody's heard of any of the things I've done, but everyone knows the one from Peep Show who isn't David Mitchell. But the point is, I've just been binge-watching "Back", starring Mitchell and Webb, on 4OD, having discovered at the weekend that the series exists (I don't watch telly nowadays, you know), and I absolutely love it! It's absolutely hilarious, and I urge anyone who hasn't yet heard of it (ignorant fools though they obviously are) to go and check it out!

I went to school with that one there, you know.
Posted by Zoomy at 9:13 pm No comments:

As well as splashing out on plane tickets this month, I treated myself to something I really should have bought long before now - the collected edition of "Meltdown Man", the under-appreciated series that appeared in 2000AD in 1980-81. It came up in conversation with my brother recently, and I just had to get it to remind myself how cool it was. It's a real classic - tough SAS sergeant Nick Stone (remember the SAS-worship of the early eighties? Comics were jam-packed with tough SAS sergeants!) is caught in a nuclear explosion and finds himself flung into another world, where humans rule with eugenically-enhanced animals as their slaves. He gets straight to work setting things to rights.

For fifty consecutive issues, writer Alan Hebden handled the difficult task of fitting a weekly adventure into just four pages of comic (you have to get a lot of action into each page to do that!), aided by the downright awesome artwork of the type that only Massimo Belardinelli could produce. Two hundred pages of this kind of thing, all under one cover! 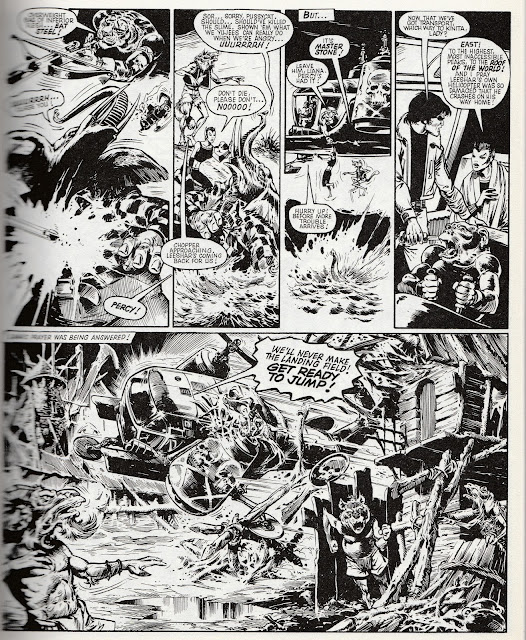 Honestly, it's that good, you can stare for hours at the artwork, even after getting through the epic storyline (complete with extremely weird and unsatisfying ending) - just look at the effort that's gone into that bottom panel! 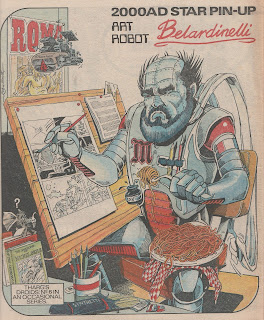 Belardinelli, seen here eating his synthetti while drawing Tharg's latest commission, was probably the greatest art robot ever to grace the pages of 2000AD. It's only in recent years that people have started to really rave about how good he was; maybe it's just the unappreciated-in-his-own-lifetime effect - he died in 2007, had retired long before the internet came along, and at his peak he never got the praise that some of the other droids did. Maybe it's because he was part of the furniture of 2000AD from the start, but took a while to warm up - he's there in the very first prog (indeed, the only creator credited in the first issue, having had the sense to write "Art - Belardinelli" on his artwork!), drawing the Dan Dare strip that was intended to be the main feature. He got the job not by being particularly good, but by being Italian; it was a lot cheaper to hire European artists than British ones back then. His first work is quite bland, but on Meltdown Man he really came into his own, and showed what a flair he had for drawing weird creatures! 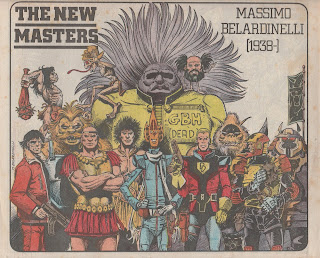 There's Nick Stone on the far left, with the eyepatch, along with just a few of the other characters Belardinelli drew over the years! But his real talent wasn't characters themselves, it was the insane amount of little details he'd cram into every single picture - some artists only look good in colour, but Belardinelli was the old-fashioned type who was at his best when just using a whole lot of black ink on newsprint.