While my brother was here, he showed me something he'd found in a charity shop, and asked "Do you remember this book?"

"Not even slightly..." I said, picking it up and looking at it. "OH, GOD, YES!" I exclaimed after opening it up and seeing the Computer Card and Word Displays inside. It's only the best book ever, 'Hello Sam' by Heinz Kurth!

It's about a Solar Automatic Man called Sam, and you communicate with him like this: 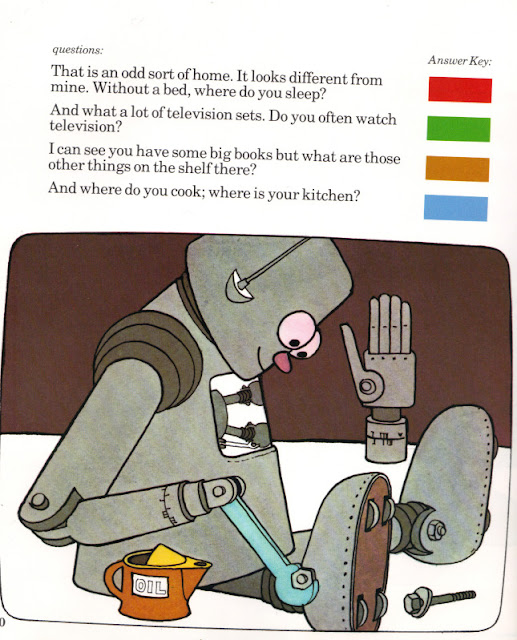 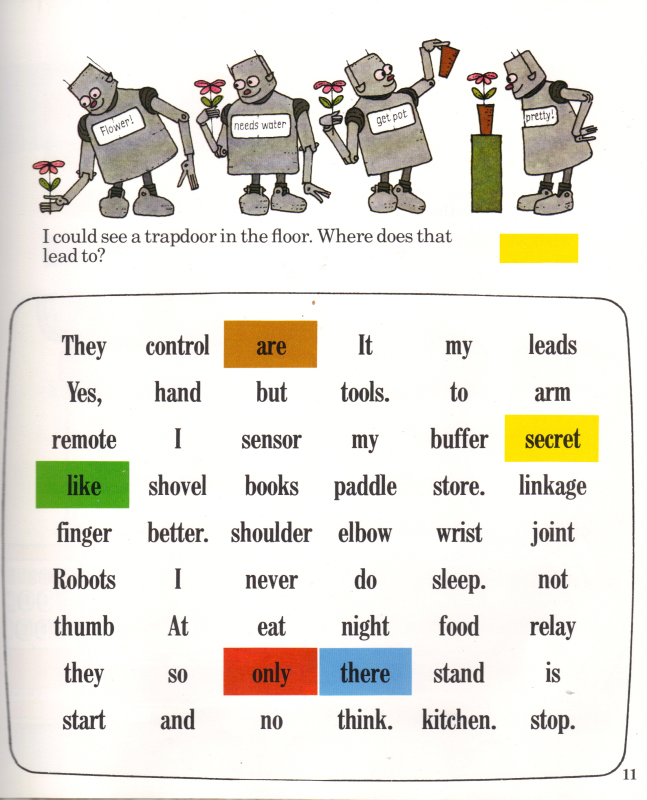 Take the Computer Card that comes with the book and put it on top of the appropriate coloured word... 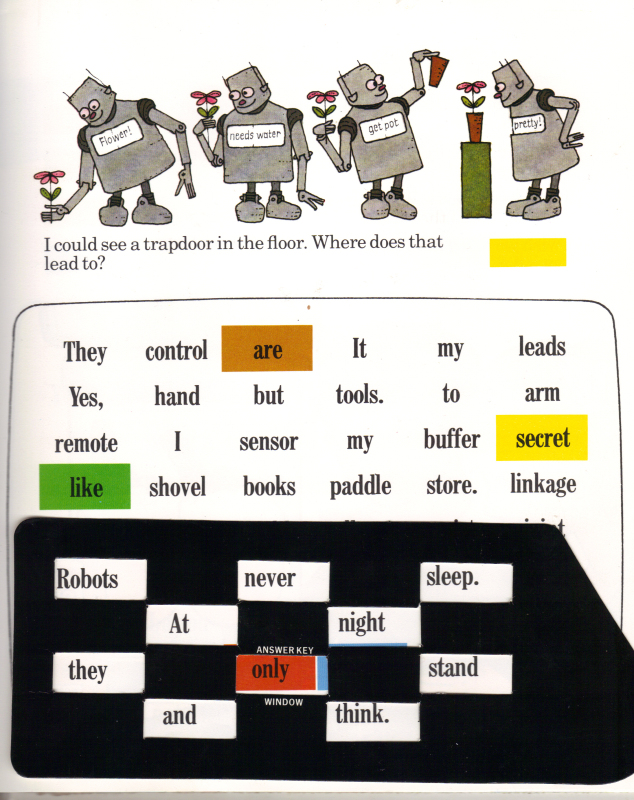 And hey presto, you're having a conversation! Such an ingenious idea, and I really loved it when I first read the book. There's an adventure involving Sam's Booster Box, that makes things grow bigger. And it ends with Sam telling us he's going to the sea for a holiday and that perhaps he'll see us there, but I don't know if there was ever a sequel. I don't know what happened to our original copy of this book, either - we weren't exactly ones to throw things away, but I don't remember seeing it after I was eight or nine. Impressively, this nearly-30-year-old copy still has the Computer Card with it - not necessary, since the book cleverly includes a template for you to make a replacement, but still cool!
Posted by Zoomy at 8:35 pm 2 comments:

My brother's just gone back to China, having been staying with me for some time, and one thing we always like to do when we get together is watch Thundercats cartoons - we videoed them when they first came on TV in late 1985, probably because we were out playing in the snow when the first ever episode was on, and have watched them pretty much constantly ever since. Now that the series is available on DVD, of course, other people without our video collection have the ability to watch Thundercats too, but it'll take a heck of a lot of watching before anyone catches up to my and my brother's word-for-word knowledge of everything that happens in every episode.

One thing about the DVDs is that they have the episodes in a weird order. Wikipedia insists that that's the order they were originally broadcast in in the USA, but I personally doubt that. I never saw any website claiming that sequence of episodes until the DVDs came out - there were basically two different episode orders proclaimed by American websites, one of them roughly the same as the British broadcast order, one of them with a few differences. America, of course, is a weird place where different states get different television schedules, so all of the broadcast orders might be correct, but I still suspect the DVDs are just plain wrong.

Anyway, in Britain (the only country that matters), this is how the greatest toy-commercial cartoon of all time first appeared on our screens. If you've got the DVDs, this is the order you must watch them in, okay? With a few incidental notes along the way...

This is the end of our first videotape, which our father had inaccurately labelled "Thundercats (30 mins)" - the first episode was shown as a compilation of the first two, and actually lasted 40 minutes or so. Actually, being an old-fashioned E-180 tape, it only had room for eight episodes, but we had the video set to the wrong channel for Pumm-Ra and recorded the snooker on BBC2 instead. So having noticed the problem a week or so later, we taped Tower of Traps on top of it, leaving only a couple of seconds of Willie Thorne and an out-of-sequence videotape to show anything had gone wrong.

But as fate would have it, that's a perfect cut-off point for the first marathon watching session you might like to have - you get the first four world-building episodes and one other by head writer (and best writer in the whole series) Leonard Starr, and the four by Julian P Gardner, with his own somewhat different (but still, mostly, hugely compelling) take on the early days of Thundercats. He disappeared completely after The Garden of Delights (an incoherent and almost completely incomprehensible story that's still strangely fun to watch), leaving the way clear for the golden years of Thundercat adventures...

Two more three-hour cassettes full of excitement and adventure! Volume 2 goes up to about half-way through Spitting Image - we were experimenting to see if we could fit nine episodes on a tape, knowing that as good luck would have it Pumm-Ra and Spitting Image were available on a commercially-sold tape, whereas most episodes were never released to the video stores at all. Volume 3 covers the rest, up to the point where Children's BBC stopped showing Thundercats for a good long time.

Virtually all the episodes on volumes 2, 3, 4, 5 and 6 were written by the five writers who'd go on to define the cartoon - Leonard Starr (all-round great), Peter Lawrence (script consultant who seemed to be roped in to provide a hasty script whenever someone else had missed a deadline), William Overgard (wrote stories almost exclusively about his own characters, with a Thundercat or two grudgingly included in the margins of the adventure), Bob Haney (with his unmistakeable contraction-free and weird-sounding dialogue) and Stephen Perry (perfectly okay stories without the characteristic quirks of his fellow writers). Well, there's also one by C H Trengove and two by Howard Post in the 'golden age', but the series certainly benefited from the small core of consistently good writers. But then we had to wait a while before volume 4...

And when it did come back, it was just these seven episodes. All good ones, though, even The Rock Giant, a Peter Lawrence classic with a plot consisting of "a rock giant comes and the Thundercats fight it".

Then, later still, we got the Five Trials. This is where American episode guides differ from British ones - the ones that come closest to our order tend to place the Trials earlier in the sequence. The problem is that the final scene features lots of characters who haven't been introduced yet, like Hachiman and Snarfer, which would mean that the Trials have to take place after The Thunder-Cutter and Feliner. On the other hand, Lion-O encounters Acid Lake and the Gaw-Rak-Rak apparently for the first time, which would mean that the Trials take place before Return of the Driller and The Astral Prison... unless he's just got a really bad memory. It's all very confusing.

Anyway, we saw fit to end Volume 5 at this point, since it had the Five Trials on it, although the BBC continued almost immediately with new episodes - almost, since they started with The Rock Giant, apparently unsure whether it had been shown before, and then moved on to...

That's the end of volume 6, and also of the Golden Age Of Thundercats Cartoons. The remaining 20, which didn't get shown until even later, are mainly written by a wide range of one-off jobbing writers, most of whom didn't seem to understand even the basic concepts of the series. I suppose they had to fill out the 65-episode contract somehow, but it's a bit of a dismal end to the show. Our volumes 7 and 8 had to be reconstructed after losing the originals, so I can't completely 100% promise that they were shown in this order, but it was something very close to this, anyway:

Luckily, that wasn't the end - imagine if your marathon watching-session had to end with Dream Master (possibly the worst episode ever) and Fond Memories (consisting largely of footage from previous episodes, although at least it wasn't a straight "clip show" like some cartoons produce). To get the full British Thundercats-watching experience, you need to watch Thundercats-Ho! The Movie - never shown on TV over here, but available as a video release. It appeared on the shelves before the second half of the first-season episodes had been shown, so you could watch it after The Rock Giant if you want to, but it's best to save it for a finale. Watch the VHS, not the split-into-five-episodes version on the DVD. You haven't got the VHS? I don't know, try eBay or something.

That, however, is the end. While they did make further episodes in America, they never found their way across the Atlantic, and I'm pretty sure that's a good thing. Okay, off you go and watch those DVDs! Relive my childhood!
Posted by Zoomy at 9:30 pm No comments: