A bit about me

Because, let's face it, I've rather neglected this blog just lately. I'll try to get into the habit of blogging every day again and deluging you all with trivia related to my life! Here's all the trivia I can think of right now.

I've developed a huge liking for stilton cheese just lately. How can something full of blue mouldy stuff taste so good? It's a bit worrying, really, because my normal diet consists of junk food and sweets, so maybe I'm secretly acquiring cultured tastes? What's next, caviar?

Tomorrow I'm going to go down to London and check out the tail end of the Mind Sports Olympiad. I haven't done the whole week this year, because I'm trying not to spend money to excess, but I found my 1997 official competitor badge while I was moving house, and I need to wear it to this year's event. I'll go along for the whole week in 2017, I think, just to celebrate the 20th anniversary. Wow, that makes me feel old.

Speaking of money, Barclaycard have written to me today to say they're increasing my credit limit by another £4000 unless I tell them not to. They're clever, are Barclaycard, they've obviously got me on their list of 'people who if we periodically increase their credit limit will continue to use it to the full', but I've got one over on them - the chip on my card is broken somehow, so it doesn't work in card readers. Thus the only way I can use my Barclaycard is online, I can't impulse-buy things from shops or nights in hotels with it, which works out nicely for me.

And speaking of moving house, I haven't got a television at the moment. Well, I have got a television (two televisions, actually; I've also got my brother's portable among all his possessions squeezed into my small new flat), but not even so much as a freeview box to allow me to watch live TV with. I figure that my infinite supply of video tapes and video games, and the existence of YouTube and things are more than enough to keep me entertained. Who watches live TV nowadays, anyway? There's never anything on.
Posted by Zoomy at 2:37 pm 1 comment:

2016 is the tenth anniversary of the first ever memory competition I organised, with the aim of doing something to fill out what was then a minimal calendar of memory events and make a few more people aware that there's such a thing as competitive memorisation of numbers, cards and more - maybe even getting a few more regular competitors their first introduction to a lifelong obsession!

It's been quite a success, in a small way, over the last ten years, and I had been thinking at one point that now we live in an age where there are memory competitions all over the world practically every week, I might give it a rest and save myself the cost and trouble of running an event like this in future. So how I've ended up persuaded to do the following list of things in the tail-end of 2016 is beyond me, but there you go.

On Saturday November 12, at the scenic Broneiron Lodge in Wales, we'll have something new and, in a way, old as time: 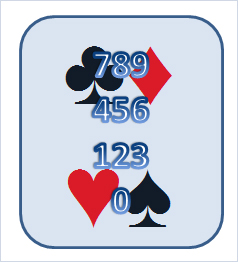 A competition all about system-based memory - numbers and cards, the classic memory tests! Memory competitors with good memories might recall the Memory World Cup in Weinheim in 2004 - this is a similar kind of beast. With a 'marathon', 'short' and 'speed' discipline of each, the winner will be the one whose all-round grasp of memory technique is the best!

Scoring is based not on 1000-point standards, but on the classic model of 100 points for the best score in each discipline on the day, with everyone else's score proportionate to that.

This championship will happen if enough people are interested in taking part, so please let me know if you want to come! It's something I've been talking about doing for many years now (people call it "Ben's Baby") and I would really like to see it catch on as a new part of the ever-growing memory world. Please give it a try, it would make me very happy!

You may then want to stay overnight at Broneiron, because the following day, Sunday 13 November, we have our much-loved... 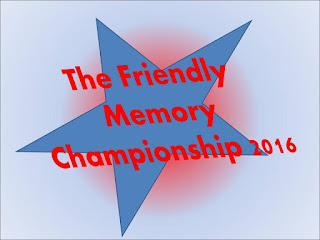 It's a Sunday this year, to facilitate any brave competitors who want to jet back from the Memoriad in Las Vegas (November 8-10) and try their luck at the Friendly Championship too!

So as not to fill up this blog post with the details, I urge you to look back on previous years' posts on this blog for full and extensive descriptions of the ten disciplines involved in the competition - I will dedicate a separate post to this year's Friendly when I get a chance.

However, the main, most important thing about the competition is the sheer unadulterated Friendliness of it all! This is the one to come to if you're new to memory sports or if you've been around for sixteen years or more, just for the sake of getting to know everybody and having fun!

Entry fees for the two competitions above will be £20 (each, I'm afraid), with the usual dispensation of free entry for brand-new people who've never competed before. There have been a couple of very generous people who have offered to chip in for the costs of running these things, so if so they will have my enormous gratitude and praise, and prices may yet drop! And the very next weekend, something exciting is happening, too.

On November 19-20, in central London, there will be a competition that may or may not be called...

The logo needs to be made a bit more extreme, but you get the idea. It's pronounced Brex-M-T, and my obsessiveness about capital letters is being deliberately subverted in extreme ways!

If you don't know about the Extreme Memory Tournament yet, click on that link!

Anyway, the point is, I'd like to officially publicly announce that there's probably going to be an event in the style of the XMT, using the same software, here in Britain, later in the year. It's fully approved, authorised and designed by XMT creators Nelson Dellis and Simon Orton! The date will be Saturday 19 and Sunday 20 November, 2016. It'll be invitation-only and limited to sixteen British competitors, but it'll be a prototype for other events of that kind around the world, and a whole lot of fun! Here's how it will work:

Mini-qualifiers
The first order of the day will be to sort the sixteen competitors into four groups. Seeding for these groups will be determined by a qualifying session - all at the same time, the sixteen competitors will have one attempt at each of the five disciplines, trying to record the best score they can. Just like the Big XMT qualifying, only this time you only get one try at it!

Group stage
Now that we have our groups, each player will play their three opponents in turn in a best-of-five match, like the knockout stages of the Big XMT. The first discipline will be randomly chosen... but each competitor gets up to two vetoes, so the discipline they eventually settle on will be a compromise between the two of them! The loser of that discipline gets the choice of the next, and after that it alternates. Three points for a won match, one for a draw, and the top two in each group qualify for the quarter-finals.

Knockout stage
Quarter-finals, semi-finals and final! The first two are best of five, the final is best of seven - all three start with a surprise event. Just like the Big XMT, this part, just a teensy little bit smaller.


The As Yet Untitled UK-based Memory Championship!

It'll have a name once details of sponsorship and so on have been finalised, I promise. It'll get its own blog post and Facebook page and international publicity and everything!

This is, by popular demand, an international standard event, the same format as the UK Memory Championship which has just happened in London (congratulations to new UK champion James Paterson and overall winner Pan Ziqi!) Disciplines are the same as the Friendly Championship, but in many cases longer in memorisation and recall times.

This will be the second time I've organised an international-standard, two-day competition, and I'm assured that the time is right for it now (the world just wasn't ready for it the first time round, obviously, since it only attracted about four people) and we will be positively deluged with enthusiastic and world-beating memory folk from all around the world! Absolutely teeming with world champions past, present and future, it'll be! Stay tuned for more details soon, and let us know if you want to be there too!

Is that all? Yes, I think so. I mean, I have got a real job as well. It's lucky I've got a lot of holiday days still to book, really, because I'm going to have to use them all in November...
Posted by Zoomy at 10:49 am 3 comments:

Lots of them! Coming soon! I will 100% definitely announce anywhere up to four memory competitions at the weekend! Stay tuned! Something for everyone! Maybe even a special "Tall German People With Cool Beards" prize for Simon, since I seem to have spent a lot of time taking the opposite side to him in various memory-themed debates lately, and arranging competitions on dates that are inconvenient for him, so I feel like I should apologise with some kind of special trophy. But then I'll feel like I have to get trophies for absolutely everyone else, too, and my original resolution for this year was to save money (which I still haven't got any of) and hassle, and it's all turned out quite the reverse somehow...
Posted by Zoomy at 8:52 pm No comments: