I know I probably say this every year, but it's so great when the football season starts again. Match Of The Day on a Saturday night is a great British institution. Scrap the summer break, make them play football all year round, that's what I say.
Posted by Zoomy at 10:46 pm No comments:

One last practice of memory stuff this weekend, then two days of work, then I've got Wednesday off to travel down to London before the competition on Thursday and Friday. And then it's a bank holiday the next Monday, and bank holidays are meaningful again now that I'm more or less working!

I'm really looking forward to the UK Championship now, just because it'll show how well I can do in a real competition this year, and give me a useful guide to how far I need to improve before December. I can never quite be sure where I am, preparation-wise, until I've done a two-day competition.
Posted by Zoomy at 10:14 pm No comments:

The press release for this year's UK Memory Championship is basically last year's press release with a few subtle changes, so it still says I'm of the status of Daley Thompson. I'm really not. I'm worried that he'll read it and come around and beat me up, because he's quite a lot bigger than me (or was in the 1980s, anyway).

In fact, the press release is pretty much entirely about me, which is a little bit worrying. Maybe nobody else is coming to the competition? That would make it easier to win, but it'd be a bit embarrassing if someone who's read the press release comes and writes an article.

Oh, and just for the record, the press release says I've memorised a pack of cards in 24.64 seconds, when it should be 24.97. And that's not even close to being a world record any more - I'm going to have to try to beat it next Friday.
Posted by Zoomy at 7:25 pm No comments:

There's no getting around it, I need to work. I've had the day off, all by myself, the brother's gone back to China, and I've done nothing. I need to be in the office so I can do things in my free time and complain about how I haven't got enough of it. And that really annoys me. Still, back to work tomorrow and I'll forget about it and wish I had whole days to myself again...
Posted by Zoomy at 8:25 pm No comments:

Hooray, because I've got my new Order of the Stick book today - not reprints of the awesome webcomic, which has just passed its 800th episode and is still going strong, but reprints of the strips that appeared in Dragon magazine, plus a whole lot of never-seen-before unashamed-filler bonus material which is actually really brilliant. I laughed out loud four times, and really loudly too, which is well worth the price of the book. I'd say "go and buy it", but it was a limited edition and might actually not be available any more, I'm not sure. Go and acquire one somehow, anyway.

Also, the 2012 comic annuals are in the shops now - we seem to have given up on the in-time-for-Christmas release date and now be gradually inching towards a three-years-in-advance kind of thing. I was curious to see whether the Dandy annual would reflect the new look, or whether it would be a couple of years behind the weekly comic as usual, but actually it's sort of half-and-half, in an amalgam that's really quite interesting.

Ooh, Arsenal just scored after three minutes! Yes, it's also football season again, and I'm fully intending to waste a lot of time watching games (in addition to the time I spend reading comics) instead of memory training.

Anyway, as I was saying, the Dandy annual has a lot of characters who haven't been seen for quite some time, alongside some strips that came along with the latest relaunch. There's an old-fashioned art style on Desperate Dan and an all-new-looking Korky the Cat who's entirely unlike any previous incarnation. It's all very readable, too. Go and buy it. And the Beano, which is the same as it always is, and therefore worth reading.

One thing that's not out yet is the annual Broons and Oor Wullie classic-comic reprint book. But it's listed on Amazon, and ooh, look at that! No, not the cover (I know there are very few full-colour, high-quality pictures of the Broons drawn by Dudley Watkins, but they've already used that group pic on the covers of two previous reprint books, and it's getting silly now) but the page count! 144 pages, 32 more than last year, which makes me believe they've listened to the impassioned complaint in my blog post last year and brought the number of reprinted strips back up to what it used to be! Maybe it's also chock-full of racism, just like I demanded in my other blog post last year! I feel quite accomplished now.
Posted by Zoomy at 7:42 pm No comments:

It's all in the mind

I seem to be getting a lot of news updates about mind sports lately, so I felt that I should pass them on. The World Memory Championship has moved - but don't worry, it's only in space rather than time, and to a hotel rather than a university, which tends to be a good thing, more often than not. Hotel conference rooms are more luxurious-looking than exam halls, even if the latter are better suited to memory championships. New location is the Jingyi Hotel, in the Haidian district of Beijing.

I'm really quite looking forward to Beijing now. Just as long as I've got enough money for the trip from somewhere by then, it'll be a great place to visit! And since the press releases are still claiming (in defiance of all common sense) that six billion people watched last year's WMC on telly, no doubt I'll be mobbed by millions of devoted memory-championship fans!

Elsewhere, back home in London, I'm told that the fifteenth Mind Sports Olympiad kicks off on Saturday. It can't really be the fifteenth, can it? ... (A small amount of counting on fingers and toes later) ... It is. Wow, I must be old. I was there at the start, with all the wild dreams of international success and piles of money for competitors and organisers alike. Still, it's nice that it's still sputtering along, though I won't be bothering with it this year.

And I haven't said congratulations to Richard Ratcliffe on the Stratego World Championship last week! Shame I couldn't go to that, but it's got to be a good omen that there was a British winner for a change. And it's also the British Othello Championship in Cambridge on September 17th and 18th - once again, I can't go because of a memory championship clash, but if you feel like a bit of othello in its ancestral home, I recommend it heartily!
Posted by Zoomy at 8:52 pm No comments:

As I've mentioned on this blog once or twice before, I'm fascinated by the work of "Marc", the illustrator of cheap cartoon videos in the 1980s. His depictions of the Japanese cartoons that came via America to Krypton Force can be seen here, but he seems to have really come into his own when drawing the covers for collections of public-domain American cartoons from the 30s and 40s, packaged by a company called "Vidage".

Vidage might well have been the same people as Krypton Force, or maybe they just also chose Marc from the usually-anonymous ranks of cheap-video-cover-artists, I don't know. But I've only got a couple of their videos, and the BBFC website tells me that there were actually quite a lot more, all seemingly with covers by Marc!

Here are the two examples I do own: 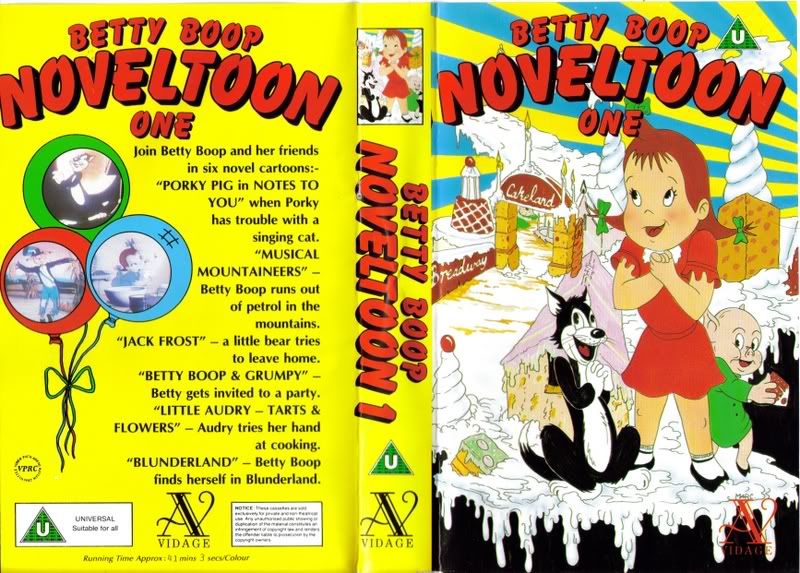 Betty Boop Noveltoon One - containing three Betty Boop cartoons ("Betty Boop and Grumpy" is actually called "Betty Boop and Grampy", and he isn't at all grumpy), a Porky Pig (the 1960s Korean-produced colorized version of the black-and-white original), Ub Iwerks's "Jack Frost", and a Little Audrey. The latter was a Noveltoons cartoon - the name given to the cartoons made by Paramount after they bought out the Max Fleischer studios - but the rest weren't. Nonetheless, the Vidage people seem to have liked the name, and applied it to a number of 'sequels' to this video.

But just look at that wonderful cover, proudly signed by Marc! His technique was to pause the video at carefully-selected points, and carefully copy the pictures, then combine them all into one big scene. So we get Porky in his nightshirt, with a slice of cake drawn into his hand to fit the general theme, and the cat in a singing pose that cleverly matches Little Audrey's delighted expression and the Candyland background. There's a lot of work gone into this!

The BBFC tells me that there are the following other tapes in the "Noveltoon" range by Vidage - two of them are available second-hand on Amazon:

"Sport Champion", which I'm guessing included the cartoon "Sport Chumpions", although maybe I'm wrong, got a PG rating for some reason - I wonder what other cartoons were on it? It's more normal to say "Mutt and Jeff" rather than "Mutt Jeff", which surely someone would have noticed by watching the cartoon, but perhaps the person who named the video collection thought it was about a mutt called Jeff. The cover to volume 3 is signed by Marc, volume 4 doesn't seem to be, but it's clearly his work. Again, they're real masterpieces!

And then there's Fun Parade: 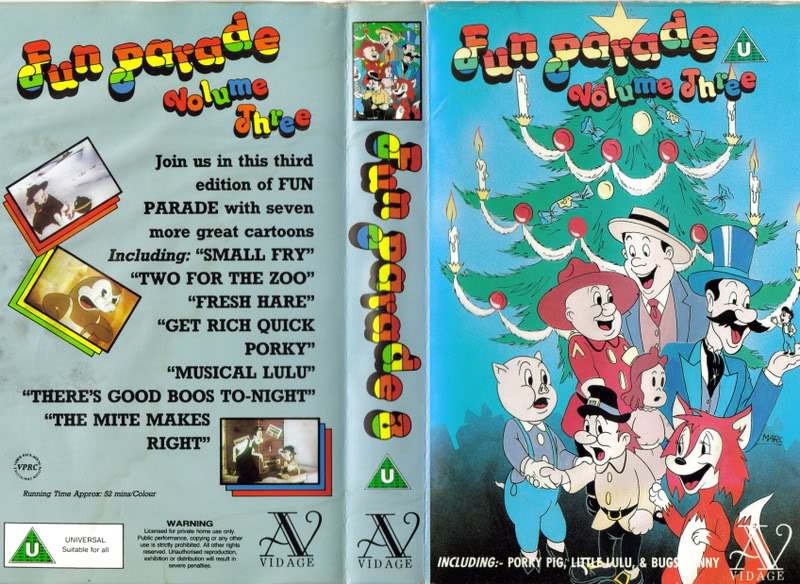 Now this is really ugly, but you've got to admire the way the characters are grouped together so that Marc has to draw as few hands as possible. He also seems to have decided against trying to draw Bugs Bunny, perhaps because he couldn't find a pose to copy that would fit into the Christmas get-together theme he'd chosen for the cover.

The BBFC lists eight volumes of Fun Parade, with no further detail except that volume two is directed by "Seymour Kneitel/i. Sparbar/others", which suggests it might actually contain some more Noveltoons (Seymour Kneitel and Isadore Sparber also worked for Fleischer before Paramount took over, but the complex sibling politics there meant that Dave Fleischer was always credited as director on Max Fleischer cartoons).

I want to know more, and assemble a gallery of Marc's work for the world to see! Anyone finding one of these old tapes in a charity shop or attic is urged to please let me see it!

There might be more out there - the BBFC list omits one of the Sci-Bots tapes and the mysterious Mission Promete (which I'm increasingly convinced came from an alternate universe, because nobody else has ever heard of it). And Marc may have worked for yet more companies producing cheap artwork. I must put on an art exhibition some time...
Posted by Zoomy at 1:31 pm No comments: