Me and my Friends

I'm really going to miss watching repeats of Friends every day when E4 finally stop it later this year. I was thinking about buying the DVDs, but after all these years of watching the expurgated versions that E4 show, all of the passing mentions of pornography and prostitution in the uncut episodes would warp my fragile little mind.

I'll just have to watch cartoons in the evening instead.
Posted by Zoomy at 9:15 pm No comments:

I thought I'd blog a thing or two about my profile pictures on Facebook, seeing as I just remembered that they exist. They're all really quite good pictures of me, except for one of them, and I very very rarely look good in photos. 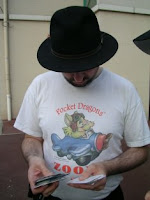 This one over here, for example, looks like I'm doing some kind of street performance of memory skills.

I'm not. I'm looking through a pile of business cards, trying to find one of Gaby Kappus's that she could give to someone else. We're in France. 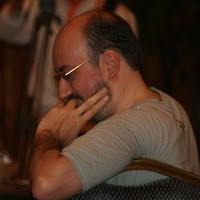 I don't know why I ever made this a profile picture. It's terrible. I think it was just a play on words, on account of it shows me in profile...

Check it out, there was a time when I had some remaining traces of hair on my head, no beard, and the original hat and lucky shirt! How I miss those days!


Me wearing Tony Buzan's hat, because
I'd lost my own, in Bahrain. 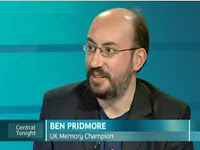 This one is from Central TV, which was a great interview, mainly because the TV image seemed to be stretched to make me look taller and thinner. I suspect one of the presenters is anorexic.

This one speaks for itself.

Coolest picture ever.
Posted by Zoomy at 8:54 pm 2 comments:

Not a resolution, but...

I'm playing othello online at the moment, for the first time in quite a while. Perhaps I'll add an extra new year's resolution to get good at othello, but I don't think I'll bother. One of these days, though, I'm going to memorise the best move in every possible position, just for the fun of it. Or the lack of fun of it, because doing that would quite literally take all the fun out of playing the game. But still, it'd be interesting...
Posted by Zoomy at 8:00 pm 1 comment:

Among my many new year's resolutions was one to get up early in the morning and go to bed earlier the night before (I've heard it has health, wealth and wisdom benefits), thus enabling me to do a little bit of memory training in the morning, start work early, finish work early, do a little bit more memory training and have ample free time for lying around wasting time and eating cheesecake. Because next year, those two favourite pastimes of mine are going on the resolution list.

This seems to have completely thrown my body clock for a loop, with the result that I woke up at four o'clock this morning and couldn't get back to sleep, so I got up, had a bath, had breakfast, practiced memorising historic dates, then went back to bed and got up again at half past eight. It's extremely confusing. Perhaps I should just stay in bed all day, every day, and not care about being healthy, wealthy and wise? Because let's face it, I'm overweight, unlikely to be paid any WMC prize money and generally stupid, and I'd hate to change too drastically in case nobody recognises me.
Posted by Zoomy at 7:48 pm 1 comment:

I had to download Firefox to get one particular website to work, but even now I've given it a trial run, I still disapprove. I'm sticking with Internet Explorer for everything else.

I tend to automatically disapprove of anything computer-related that is trumpeted as being 'better than what normal people use'. This is why I will never go within a mile of a Mac. Even though I went to school with Robert Webb. Advertising just turns me off.

Nor can I imagine ever putting my fingers to a dvorak keyboard. Yuck.
Posted by Zoomy at 8:37 pm 2 comments:

I've added historic dates and random words to my training schedule - I don't normally practice those at all, but I figure it can't hurt. I might even throw in a bit of names and faces practice too, if I can really force myself to (because, as we all know, I'm rubbish at names and faces and consequently don't like doing it). I've put together word-o-matic and date-o-matic Excel files, using a random words list from the internet, and all the available former dates papers I could find. It's harder to make a names-and-faces-o-matic, although that's a pretty poor excuse since there's a perfectly good training thing at memo-camp.de. But I don't really like training on the computer so much. I spend so much time staring at a computer screen, both at work and at home, that memory training is practically the only rest my poor long-suffering eyes get.

The Sound of Music twice an hour, and Jaws One Two and Three

I haven't watched very much TV over the Christmas holidays, which might explain the following alarming statement: The best thing I've seen on telly lately was "The One Ronnie". To celebrate his eightieth birthday, Ronnie Corbett stars in a show full of Two-Ronnies-style sketches with a lot of comedians from the present day. And it worked! It was genuinely funny all the way through, and perfectly in the classic style. It was like watching a brand new Two Ronnies Christmas special, and not even noticing the absence of Ronnie Barker! Harking back to the glory days of British comedy (you know, the days when saying "bottom" guaranteed a huge laugh from the audience), it was great entertainment.

Which made it all the more surprising that Matt Lucas and David Walliams, who were among the guest stars in that show, have come up with something so terrible as their new series "Come Fly With Me". I'm not sure if it's harking back to the glory days of British racism, or to the glory days of fly-on-the-wall documentaries being new enough that you can parody them in original ways, but it didn't really work. There just aren't enough jokes about budget airlines to fill a whole series, and so a lot of scenes derive all their humour from the two actors in blackface, talking in silly accents. Very strange programme.

As for Doctor Who, it was pretty good. On the one hand, if you're reduced to doing "A Christmas Carol" for your Christmas special, it's probably time to give up, but on the other hand this episode did do some interesting and clever things with the concept of time travel. I've been wanting to see this for quite some time - Doctor Who is a programme about a man with a time machine, but the new series doesn't really get to grips with that idea. When the Doctor travels to a different time, it's treated as if he's just gone down the road to another place. Probably the fault of the insistence on having continuing subplots running through each season, but it's nice to see some actual use of the Tardis in this one. (Yes, the Doctor does things that he's specifically said in earlier episodes that he's not allowed to do, but I don't care.) And the time-travel logic more or less made sense all the way through, give or take, sort of.

Now, the best way to write about time travel is demonstrated in the awesome movie I saw on the plane coming back from China - "Frequently Asked Questions About Time Travel". It's absolute genius, and I don't know why I'd never heard of it before now. I obviously need to spend more time hanging out on nerdy websites.
Posted by Zoomy at 6:30 pm 3 comments: