I'm genuinely thinking about writing a huge long account of everything that's happened in the world of memory sports between 2000 and 2009. And calling it "Noughty Memories", but you can ignore the title if you think it's silly. The second decade of competitive memory has been crammed full of a whole book's worth of events, after all. And 2000 was sort of a starting point for lots of things, not least Gunther memorising 400 digits spoken at a rate of one every two seconds, confounding those scientists' predictions that nobody would ever memorise more than 30, and giving Tony something to talk about in every speech at every memory competition ever since. Usually twice.

Being in the mood for this, I found an entertaining discussion about the revised championship points standards issued in 2005 (back in the days when there wasn't even any kind of rule about when or how the standards would be updated, it just happened whenever the powers that be thought it was necessary and the standards were altered to whatever seemed sensible to Phil - nowadays, in these more enlightened times, there's a rule about when and how, although everyone ignores it), which included Boris's reaction to setting the historic dates standard to 100 dates: "The standard of dates is much too high. No-one will ever come close to it."

The world record, four and a half years later, now stands at 118.5, and frankly I think the championship points standard needs increasing beyond the 100 mark! It just goes to show how far we've come since those dark and distant days. Maybe we should all mention that in all our speeches at memory competitions from now on.

We also don't seem to argue about the rules as much as we used to. Maybe the 2010s will be the decade when the World Memory Championships has a consistent set of rules from one year to the next, and nobody complains!
Posted by Zoomy at 9:26 pm 1 comment:

The other day, while drifting aimlessly around the internet, I was reminded of Krypton Force videos (as described in my blog a few years ago here and here). I looked for them on eBay and as luck would have it, there was someone selling off a big video collection, including one Protectors tape and THREE Sci-Bots that I haven't got. 'Splendid!' I thought to myself. 'I'll pick up a few more of those poor-quality British bootlegs of American dubs of ancient Japanese giant robot cartoons!' So I bid 99p each on them and left eBay to work its wonders.

With an hour to go before the end of the auction, just now, I got a trio of emails telling me I'd been outbid on the Sci-Bots tapes. 'Hey, check it out, one of the other three or four people in the universe who like these things has discovered these auctions!' I thought. 'Well, we'll see about that, let's have us a bidding war!'

So I put a maximum bid of £5 in, and when it turned out that wasn't enough, went up to £10, which is way more than these things are worth, but hey, I'm rich. Turns out that was my rival bidder's maximum too, so I went with £10.50 and wondered if he/she wanted these videos (which have probably been taped over with something else long since anyway - Krypton Force often forgot to remove the copy-protection tab from the second-hand video tapes they used) badly enough to outbid me again.

Turns out that he/she did, and is willing to go up to £25 and beyond, on all three auctions! Now, that's just silly. It's not like these videos are valuable. 'Downright awful' is the kind of words most people would use for them, indeed. Only a handful of weirdos, like me, could possibly derive any enjoyment from the things. Well, I've got the bit between my teeth now. I'm wealthy, foolish and curious, which is a very bad combination for circumstances like this. I'm going to see just how high we can make these bids. 38 minutes to go.

If I don't blog again, it'll be because I've had to sell all my posessions, including my video recorder, to pay for a cheap and tacky video of a cartoon series that I don't really like all that much anyway.
Posted by Zoomy at 2:28 pm 2 comments:

It's nice to have a weekend of doing nothing. Or of catching up with all the things I've been meaning to do for weeks, anyway. I've also decided to use up what remains of my holiday from work to take the whole week between Christmas and the New Year off, and just stay at home, lounging around and doing nothing. I haven't done that for much too long!

I'm sorry that doing nothing and planning future occasions when I'm going to do nothing doesn't make a terribly exciting blog, but maybe tomorrow I will have done something after all and will be able to write about it.
Posted by Zoomy at 9:05 pm 2 comments:

Sorry I didn't post anything yesterday, but I was busy doing something staggeringly important - or at least that's my logical deduction from the fact that I can't remember why I didn't get round to blogging.

Anyway, I've been meaning for a few days to mention that I was pleased to see the Popeye-themed Google logo recently. It did confuse me at first, making me think "Wait, is it a Popeye anniversary of some kind? It was January he first appeared, not December. And the cartoons were 1933, surely, so it's not 75 years of those..." It turned out that it was to commemorate Popeye's creator E.C. Segar's 115th birthday.

Now, it's not that I'm complaining, since any Google logo featuring Popeye has to be better than a logo that doesn't, but that seems like a bit of a stretch to me. It's like something that might happen in one of Segar's own comic strips - they decide to do a Popeye-themed logo and have to come up with an excuse for it, so come up with a ridiculously tangential justification. This would be followed by someone exclaiming "Good night!" and fainting.

Anyway, since now we don't need a good reason for this kind of thing, as a continuing tribute to the sad fact that Segar is still dead, from now on whenever I win a memory competition I'm going to let his slightly less well-known creation Professor Wotasnozzle announce the fact for me: 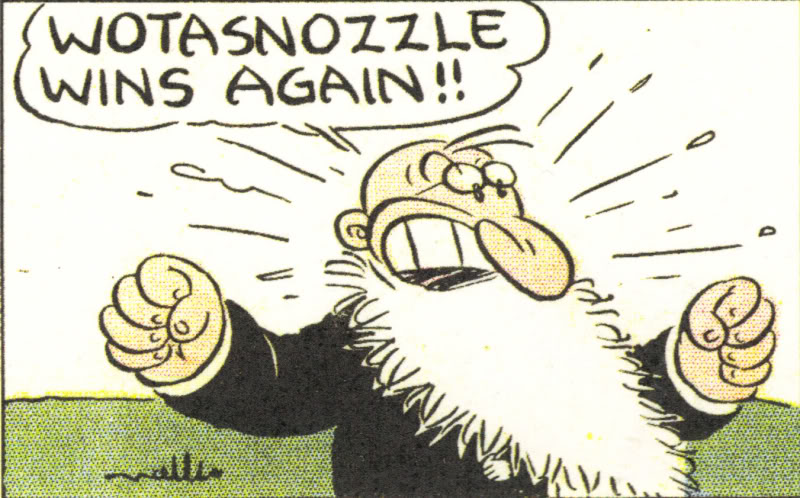 I like Wotasnozzle. I'm going to look like that when I'm a little bit older.
Posted by Zoomy at 8:54 pm No comments:

While doing my reading-volunteer thing today, I flicked through a book of nursery rhymes at the school and was surprised to find that it contained "Taffy was a Welshman, Taffy was a thief". I would have thought that that poem would be out of fashion with modern educational theories, but maybe not. Possibly we're trying to encourage the young folk nowadays to distrust the Welsh and to deal with persistent thieves by flinging a poker at their heads.
Posted by Zoomy at 8:00 pm 2 comments:

The Sainsbury's support office is really very like the Boots one, so it was an interesting experience to be there in my memory-man clothes rather than the suit and tie, being a visiting memory-trainer rather than whatever it is I normally do for a living. My presentation was rubbish, but hopefully they got some good pictures for publicity. Tune in to the Sunday Telegraph... no, wait, I mean the Independent (some memory man I am, I can't even remember what paper I've been talking to) on Sunday to read all about it. Probably. It might still not be in there after all, I can't promise anything.

I'm going to bed. I couldn't get to sleep last night, and I had to get up early this morning to catch my train, so I've been feeling tired all day. That might have been a contributing factor to my presentation being rubbish, but it's probably just because I'm generally rubbish at memory presentations.
Posted by Zoomy at 8:47 pm 2 comments:

London tomorrow, teaching people to memorise the locations of Christmas products in Sainsbury's. Rather than preparing my presentation, I've spent the weekend watching the Alan Bennett season on BBC2. This is justifiable, you see, because Sainsbury's is mentioned in passing in "A Chip In The Sugar", which was on today. However, the practical upshot of this is that I'm only just now finishing the tedious preparation work. This is a really good example of why people who say I should do memory stuff for a living don't know what they're talking about.
Posted by Zoomy at 10:36 pm No comments: