Thanks to the wonders of the internet (and to Josef for pointing it out), I've got a new Lucky T-Shirt! This one, indeed, is extra lucky, since it's got a signature and picture of a dragon drawn on it by Real Musgrave himself! As I'm sure you know, I get a lot of wear out of my lucky shirts, so my current supply will keep me going for many years to come, indefinitely putting off the day when I have to accept that they haven't made them since 1998 or so and I might not be able to keep finding them on eBay. I might even save this new one and use the extra luck it brings for the next time I try to win the world memory championship! I mean, I'm not even going to this year's, so no amount of lucky shirts will convince them to award me the title. Probably. Unless by an extraordinary stroke of luck there's some kind of bureaucratic mix-up and my name gets engraved on the trophy. In any case, please watch this video featuring some of the wonderful people who ARE going to this year's WMC! It'll be fun!
Posted by Zoomy at 6:26 pm No comments:

The Online Memory League Championship is going on at full clip. If you want to drop by the site any time, you'll probably come across memory people of all ability levels playing out the latest exciting match (each player chooses three of the five disciplines to play, with an optional tie-breaker match if it finishes 3-3). It's all running very smoothly, and providing a lot of excitement for everybody! If you want a chat about it, drop by the Art of Memory forum - if you're not a member yet, joining now would be a good idea, because as soon as I get a moment to spare to deal with this kind of thing, there'll be a new weekly (I hope) newsletter emailed out to you, pointing out all the latest developments in the world not just of memory competitions but other brain-related things too!

But let's take a look at what's happening so far... 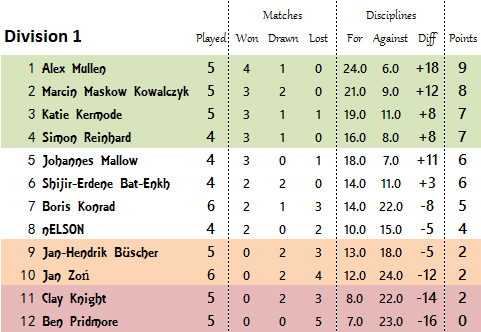 Division 1 has the cream of memory competitors from around the world, and to be honest, I'm out of my depth there. But in my defence, my first five matches were against the top five in the table there, who are carrying all before them. Alex especially is continuing his trend of blowing previously-believed-amazing times to bits, and in contests among the top players, cards times of well under 20 seconds are nothing unusual any more. Simon vs Johannes have a week 5 match to come, which I think will be important in the race to finish the season in the top four and go to the season-ending knockout matches to determine our overall champion! In week 6, I'm playing Clay, and really need a win there if I'm going to avoid relegation (bottom two places are automatically relegated, the two above them have play-offs against the third and fourth place in the division below). If I was Crystal Palace I would have sacked my manager by now, but I'm still hopeful of staging a recovery. Alex plays Shijir, which could be a challenge for him, and Marcin goes up against Katie. 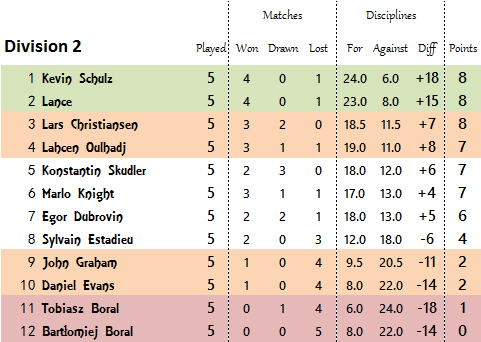 Division 2 - a great bunch of lads. All the other divisions I have to help people get in touch with their opponents and trivial administrative things like that, but these people just happily arrange their own games and play them all more or less on schedule in the right week! Kevin started off with a series of 6-0 wins, to head the table on "goal difference", but it's very close at the top there. It's going to be a real battle for those two automatic promotion places, giving them the dubious privilege of playing the scary-good top players in division 1 when the next season starts in November! 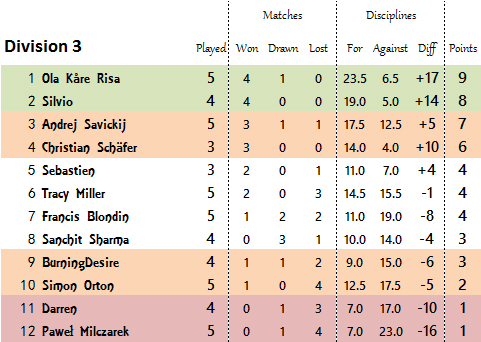 Division 3 has a few games to catch up with, one of them being the week 5 match between Silvio and Christian, both fighting to protect their 100% records. A few more nicknames here - I list people by the names they go by on the Memory League website, but I do know who they all are in their secret identities. I was Zoomy on there originally, but changed to my real name to set an example to everyone of how to avoid confusion. I might change it back again, because we all know who we are now, and everyone knows my name's Zoomy anyway... in any case, Ola is looking strong at the top of the table, but everybody there has the potential to spring a surprise or two! 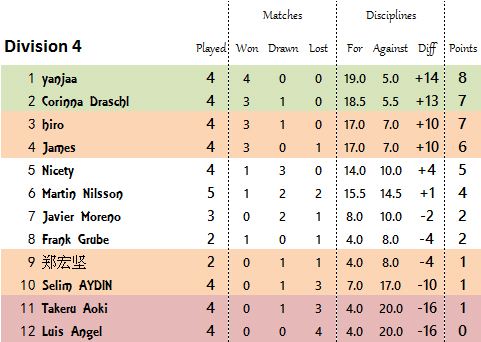 A few more missing games here, but Yanjaa and James, veterans of the live Memory League competitions in San Diego in the past, face a tough test against the likes of newcomer Hiro and old-timer (comparatively speaking) Corinna. This division, in fact, is a really nice mix of memory-competition experience - some who've been around in memory world for ages, some brand new, some in between. 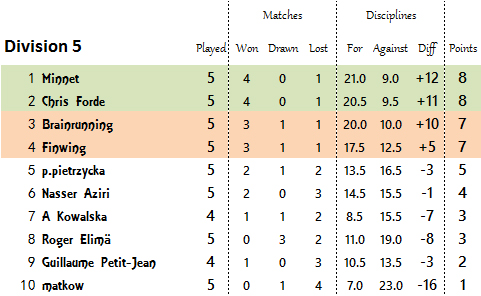 And it's the same in division 5, too, with Idriz (Minnet) and Jürgen (Brainrunning) having been around practically forever, but still finding their way in the newness that is Memory League against some hot newcomers! Like division 2, this one deserves a pat on the back for getting games played - a much more difficult task, since most of them didn't know each other at all before the season started, and they've all had to make new friends and talk to each other to schedule their games!

Which, of course, is the main reason for doing this whole thing in the first place - making new friends, competing against people at the same level, improving your best mental performance, and having fun! I love Memory League!
Posted by Zoomy at 6:42 pm No comments: