If you like podcasts, there's apparently one called No Such Thing As A Fish, where QI researchers talk about the interesting things they've recently found out about. And when someone (thanks, Mike!) told me I'm on the latest edition, episode 242, I was particularly pleased to see that I'm actually the first thing they talk about - I was shuddering at the thought of having to sit through 54 minutes of talk about subjects other than me, but you can safely turn the thing off after ten minutes if you don't care about anything other than memory.

They cover all the basics very nicely, mentioning pretty much everything about me that it's possible to find on Google, and correctly point out that memory championship winners aren't especially clever, which is nice (no, really, it is - better than the whole 'natural-born genius savant' thing that most people like to say), although they do buy in wholly to the Daniel Tammet legend without question. But most unforgivably, they say I'm on my fourth lucky hat, after leaving at least one previous one on a train. That comes from some 2014 press release that must have been trying to be nice to me - I lost count a while ago, but I'm actually on the tenth or eleventh, with all of the previous ones having been left on trains. Let's set the record straight about that.
Posted by Zoomy at 6:13 pm 2 comments:

On the way home again

Well, I suppose I have to go back to England now. All this international travel gets tiring, you know. Still, it was a fantastic memory championship! I found myself in close competition with Konsti - I ended up with 14 packs of cards, which is good enough that maybe I'll attempt 18 next time, then a solid 174 words, a decent enough 93 spoken numbers and an acceptable 74 dates, plus 816 in 30-minute numbers, attempting 936. The two of us were neck and neck most of the way, building up to speed cards - my first pack was a surprising disaster when I couldn't remember one of my images (or rather, I remembered it fine, then thought 'no, that's not right... what is that image? Oh, no, hang on, it was right all along, why did I think it wasn't?' and so forth, and so entirely forgot the various other images I'd been supposed to be memorising while that whole thought process was going on), and then the second pack I went very slowly and got 36.36 seconds. Konsti, though, did a 50.78; just enough to retain third place.

So I end up with a medal announcing that I came 4th, instead of a nice little trophy for 3rd, but hey, I've got plenty of trophies already. The two big trophies (one permanent European Championship trophy and one one-off) went to Simon, but he was pushed all the way by Sylvain, who came second with some excellent scores. There was also a very closely-matched struggle for fifth place between Tobiasz, Norbert, Martin and Susanne. It was exciting all round!

Also, for the entertainment of people who insist that my nickname is Big Ben rather than Zoomy, this sweet shop was just outside the door of the venue: 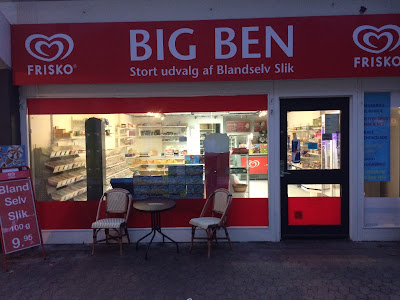