Okay, we've had the live draw for groups! It goes a little something like this...

(could've been a lot tougher, but I'm not sure it's a good thing to be up against the reigning champion and two people I haven't met before - Tsetsegzul was consistently solid at all five disciplines in qualification, Jan-Hendrik was exceptional at names and words but not so strong in the others...)

(Lance and Marlo were in the same group last year, too...)

(good draw for Katie, possibly, but how will the others do?)

As a reminder, this is the structure for the knockout phase, like last year, bearing in mind that groups B, C and D above are groups D, B and C respectively in that structure. So that means that if I win my group, I'm up against third place in group B, D or E in the round of 16. If I finish second, I'm playing the second place in group D. Finish third, I'm up against the winner of group C or D.

But let's play with permutations later. I need to get in training, fast!
Posted by Zoomy at 5:46 pm No comments:

The all-new group of death!

Sadly, we've had a couple of withdrawals from the XMT - Enkhjin and Enkhmunkh apparently have to stay at home to sit their exams, instead of amazing the world with their speed-memory prowess. It's a great shame, but the silver lining is that Wessel Sandtke and XMT veteran Johann Randall Abrina get to join the fun instead. It's also a good thing for me, because that bumps me up into a higher pot for the group-stage draw! A draw, incidentally, that can be watched right here, tomorrow, 5pm British summer time!

So now the draw will look like this - the first in the groups will be our top six from last year:

And the other three spaces in each group will be filled from the following:
So just like last year, I need to reallocate my choices for groups of death and life. The rules of the draw mean I can't end up facing Katie or Marlo, which is a bit of a relief, especially when it comes to Marlo - he's certainly the group-of-deathiest among the final pot. It's still rather full of dangerous young people who could do something unexpected and special, though.,,

Johann has two previous XMTs under his belt, so will be well accustomed to it by now, which probably makes him the most dangerous in the group. My gut feeling for least dangerous is Johnny, just because (I think) he's been around in the memory world for longer than the others, and so I think I have a clearer idea of what he's capable of.

With Tsetsegzul moving up into pot 1, I think she becomes the group-of-lifiest there, so here's my revised list that I'm crossing my fingers for tomorrow: Group F - Christian, Tsetsegzul, Ben, Johnny

So here we go! Let's get extreme! I had to miss the live draw last year, but this time round we've got a meeting in the morning that I hope I can get away from and get back home by five to join the fun! Woooooo!
Posted by Zoomy at 8:16 pm No comments:

Have you seen those adverts for a thing they're calling a Zoingo Boingo Freestyle Pogo? Perhaps not, if you don't watch Cartoon Network, but it's being described as "like a classic pogo stick on a ball!"

It's not that at all, though - someone's been searching around for a way to use a warehouse full of selfie sticks, poked in all the corners until they found a thirty-year-old stockpile of Lolo Bals, put the two together and hey presto! Get ready for the British championships in Sutton Coldfield in September... 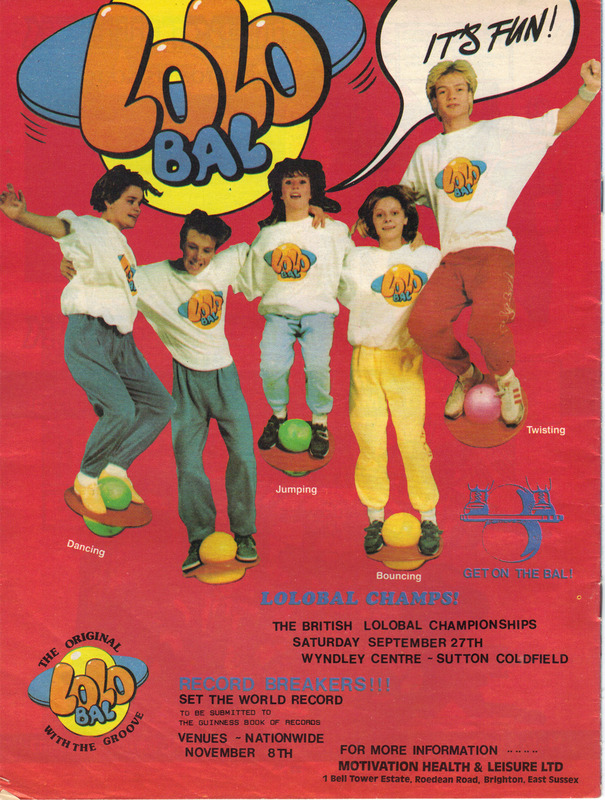 It all puts me even further into a nostalgic mood. I was in Reading last Friday night, and on Saturday took a moment to wander around town, and discovered the most awesome shop! One of those places crammed full of old comics, books, videos, records, toys, and cool stuff like that - I'm pretty sure it exists mainly to give the owner a place to house and show off his collection rather than to generate any revenue, but I spent £10 on a couple of cartoon videos - one Mighty Orbots and one of those super-rare pre-cert Video Brokers Force Five tapes (albeit one with the GaiKing episodes I've already got on Yongard the Terrible). Some time when I'm a millionaire, I'll pick up a few of the classic comic annuals and things from there, too...
Posted by Zoomy at 9:31 pm No comments: