Too much TV is bad for you

I've spent most of the day being filmed, and then tomorrow there's more to come. It's tiring! TV stars possibly don't entirely live a life of luxury after all. Anyway, this may be my last entry before the competition on Saturday (travelling down there tomorrow, and I probably won't have internet access there), so I'll have to take a few days off from bloggery. Wish me luck!
Posted by Zoomy at 10:11 pm 5 comments:

It occurred to me this morning that I'm not going to have a chance to go somewhere and aimlessly wander around the shops for at least four days after today, so I decided to go to Sheffield on the train. I know that's not a great excuse, since I quite often go more than four days without wandering around shops, but never mind. However, the train was stuck in the middle of nowhere just outside Chesterfield for forty minutes, because the train in front had hit someone. I think I've mentioned on my blog before that I have a habit of being on trains delayed by fatalities on the line. It's starting to get worrying.

Everyone else on the train needed to call at least three people on their mobiles to explain why they were going to be late. The man behind me joked repeatedly that they'd have to wait for a health and safety man to drive up from Grimsby. After he'd finished the job he was on at the moment. If I was the social-commentator/stand-up-comedian type like he obviously feels he is, I would have varied the place the health and safety man was coming from, but perhaps he thought Grimsby is so naturally hilarious the joke bore repeating word-for-word to everyone he told it to.

Meanwhile, look at this: ...and tell me the answer. And not just the answer, a good reason WHY it's the answer. My feeling is number 5, and I've got a half-decent explanation for it, but it's not terribly convincing. It comes from a Swedish magazine IQ test that Göran Andersson and his poker buddies have been racking their brains over.
Posted by Zoomy at 9:27 pm 3 comments:

Tired of being worried about Ray

Anyway, I've done my last bit of practice today before Saturday's competition, probably. I think I'm now at a point where I should avoid thinking about memory for a few days, just to help clear my mind. I might do a few quick cards practices on Friday night or Saturday morning, just to get me back in the right mood, although I'm never sure if that's a help or a hindrance. Two days now of proper job hunting - scouring the internet all over the country for people looking for part-qualified management accountants, memory champions and complete weirdos preferred. I quite fancy finding a nice job in a whole new city and relocating, actually, it'd be a bit of an adventure.

Oh, and also I'll be being filmed for this documentary, and talking to Radio 4 about appearing (does it count as 'appearing' if it's on the radio?) on Saturday Live. I also had a phone call yesterday from the executive producer of Child Of Our Time - apparently a transcription of my burblings on there, plus a photo of me, is going in a new book of the series. Fame! Fortune! Celebrity!
Posted by Zoomy at 8:26 pm 2 comments:

Forgive the lack of content, couldn't think what to write about tonight.

'Ropes' entered the room through the front door, and found Gordon and Borstal arguing loudly.

"It's a plum!" screamed Gordon.

"It's a bloody nectarine!" Borstal yelled back.

"It's a nectarine! I've never heard of anyone who can't tell the difference between plums and nectarines!"

"Nor had I until this moment! Now unless you concede that it's a plum, I'm going to give you a thick ear!"

'Ropes' decided this was a good moment to intercede. "Fellows," he said, although Gordon and Borstal were both female, "I can see what's happening here. You're both hallucinating and each imagine that you're seeing a slightly different kind of fruit. In fact, there's nothing there at all."

"Oh," said Gordon, calming down. "That does explain a lot. So who are you, anyway?"

"No, this is my house," said Borstal. "Perhaps you're hallucinating and seeing your house instead of mine?"

"I suppose that would explain why my house is in a different town to the one it was in this morning," conceded 'Ropes', sitting down in an armchair. "What's on telly?"

"A programme about Greek table tennis stars," said Gordon, sitting down in the same armchair, with some difficulty. "There's no way to change the channel on this kind of television, so that's the only thing we can watch."

Borstal picked up a hammer and started smashing the coffee table to pieces.

"Perhaps we could listen to the radio instead?" 'Ropes' suggested.

"Nothing on it but the same programme about Greek table tennis stars, only without pictures," said Gordon, quite loudly so as to be heard over the sounds of hammering and splintering wood.

"Still sounds better than the telly," said 'Ropes', going over to the washing machine and turning it on.

"That's the toaster," said Gordon. "You're hallucinating and believe it to be the radio."

"Why do they call you 'Ropes'?" asked Borstal, suddenly. "Is it because you're not a human being, but a collection of ropes knotted together and able to move around and talk by some means beyond my understanding?"

"No, that's just a funny coincidence," said 'Ropes'. "They started calling me 'Ropes' before they'd seen what I'm composed of, and still assumed me to be a human being. I acquired the nickname because of sausages."

"Oh, the coffee table's broken!" Borstal lamented. "I was going to put coffee on it!"

"There's no such thing as coffee," said Gordon. "You must have hallucinated it."
Posted by Zoomy at 9:50 pm 1 comment:

Roger Federer reminds me of Clemens Mayer - they look quite similar, if you half-close your eyes (well, three-quarters close them, maybe), and they always win. Rafael Nadal, on the other hand, has long hair and therefore looks like I would if nature had been a bit more fair in its follicle distribution. So I was rather hoping for an upset, but no such luck. Another reason I might not win the world memory championship this year is that I haven't done any practice this weekend. My motivation seems to come and go, and it's well and truly gone just lately. Hopefully I'll get back into it over the next couple of days. It's not like the UK championship is real preparation for the WMC, but if I don't win it I'll be all annoyed with myself (unless I lose it and still beat all my records - actually, that would be even better, because it would force me to get even better over the next couple of months!)

But hey, for the benefit of those who don't care about memory stuff, look at this! 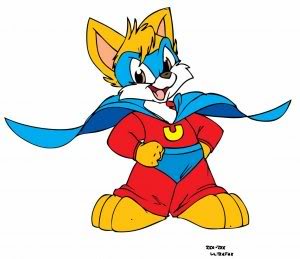 This, you see, is what my comic character would look like if I was a real artist! Drawn by the incomparable Munkart, who's not only the world's greatest creator of Chip n Dale Rescue Rangers fanart (a much more hotly contested title than you might think), but also a really nice guy. There are very few people in the world I admire enough that I would ask them to draw me as a squirrel, and even fewer people who on being asked such a thing would actually do it, rather than shipping me off to the nearest loony bin. Isn't it great? 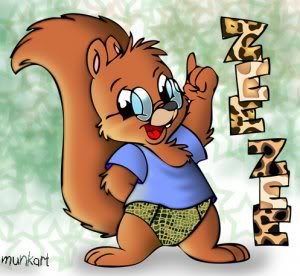