Welcome to the first in a series of reviews of comics randomly picked from my collection based on random numbers thrown at me by blog-readers! Today we have number 175 - Alpha Flight #99, from August 1991! 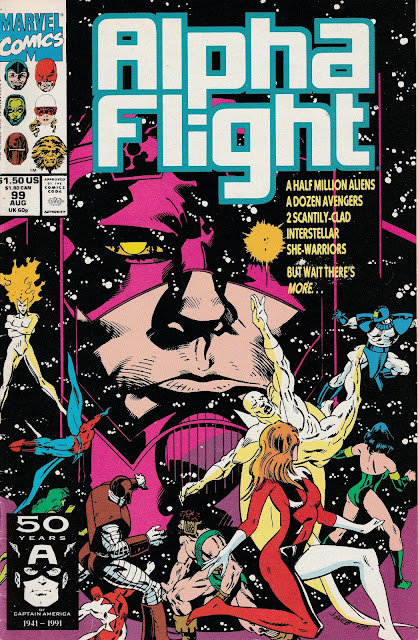 The first thing you notice about this comic (apart from the scantily-clad interstellar she-warriors promised on the cover) is that it's part three of a four-part story, designed to climax with the double-sized hundredth issue of Alpha Flight next month. And it really makes little or no concession to readers who have picked the comic up without having read the first two parts of the story! This is part of an interesting long-term trend in comics - in the sixties, when superhero comics were at an all-time high of popularity, each issue tended to be a self-contained story, with continuing subplots retaining the reader's interest. This seems such a logical way to do things, it's rather strange that by the eighties it was the norm to see comics like this one, which can only really appeal to people who have read the previous few issues as a bare minimum. It's a strategy that would seem to practically guarantee declining sales numbers with every issue! But then, by this point Alpha Flight, like most superhero comics, was only available in specialist comic shops, not in newsagents' - the only people who would get to see it would be people who already liked superhero comics and were looking for it specifically.

Nowadays, all the superhero comics are also published as paperback books containing usually six issues, so the approach of spreading a story over multiple monthly installments works fine, but in 1991 we still had this strange halfway house situation - these Alpha Flight comics were never reprinted (except that issues #97-100 were, bafflingly, simultaneously released, unchanged except for the number on the front cover, as #1-4 of a "limited series"), but you did have to have at least a fair understanding of what had happened in previous comics to know what's supposed to be going on in this one.

The opening page gives us a brief recap of what has happened so far - Her, one of those interstellar she-warriors, crashed in Toronto on the run from a vast intergalactic army called The Consortium, and Alpha Flight, joined by the Avengers, are helping to fight them off. There are a LOT of superheroes in this one. Alpha Flight at this point (as the text box on the splash page tells us) consist of Guardian, Vindicator, Sasquatch, Northstar, Puck, Diamond Lil, Windshear and Box - most of them are named in the dialogue of this issue, and if you really concentrate, you can figure out who is who. But a lot of them only show up in one or two panels, so it's not easy...

The Avengers lineup in this comic is Captain America, Quasar, Sersi, the Vision, Hercules, She-Hulk and the Black Widow. That's seven, although the cover promised us a dozen. Add Her to the mix, and we've got sixteen heroes fighting innumerable aliens of many different kinds! Enough to fill 23 pages of comic, you'd think, but instead we start off with the secondary plot of this comic, not mentioned on the opening page narration...

Nova (the scantily-clad interstellar she-warrior who serves as herald to Galactus the planet-eating giant) asks the Quwrlln (big pink space squid-things) what's going on - she was just arriving at their planet to announce Galactus's coming, when all of a sudden she, it, and everyone on it, were teleported into another dimension. The Quwrlln explain that their entire civilisation has for millennia been based solely on avoiding being eaten by Galactus, which Nova thinks is ridiculous - a strange argument, since Galactus WOULD have eaten them by now if not for the nifty dimensional-teleport - but which was anyway unsuccessful, as Galactus can home in on Nova and teleport himself across dimensions. He does so, and gets a full-page drawing to emphasize how big he is.

Only then do we go back to Toronto, where a huge number of Consortium spaceships are on the attack, aliens are on the streets, chaos all over the place. Guardian takes a moment to briefly explain to Captain America what's going on, while Alpha Flight and the Avengers fight aliens in, around and above the city.

Michael Bair isn't a great artist. He's not a terrible one either, and compared to some artists who'd recently graced Alpha Flight with their work (I'm looking at you, John Calimee), he was wonderful, a real breath of fresh air. But he's not one of those artists who can tell a story - he draws disconnected pictures of characters standing in weird, unnatural poses (the cover is a good example) and he's entirely incapable of making a visual story flow from one panel to the next. But this particular comic actually uses that artistic style to great effect! It captures the vast, city-wide nature of the battle with the Consortium by cutting away with each successive panel between what's happening up in the sky and what's happening elsewhere on the ground. It really works, and I'd be fascinated to know whether that was a deliberate decision by Fabian Nicieza or Bair himself, to get the most out of the artist's limitations. Deliberate or accidental, this might actually be the best comic Michael Bair ever drew. 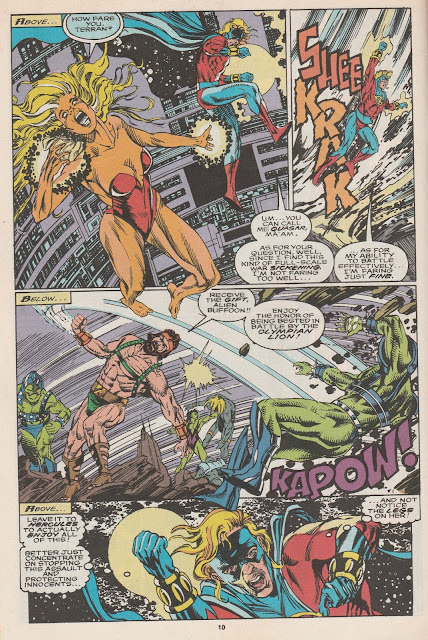 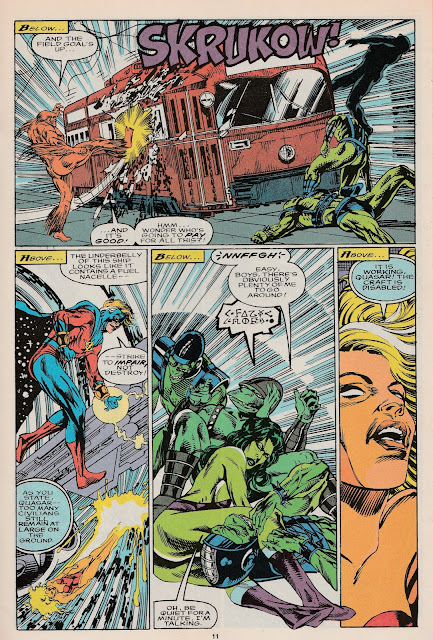 In the back streets of Toronto, Diamond Lil has been chasing one particular little alien. She corners him and explains that since his gun proved able to penetrate her skin (last issue), she's going to take it. As she mentions briefly in passing later on in this issue, this is because she's got a suspicious lump in her breast and doctors aren't able to get a good look at it because of her uncuttable diamond-hard skin. This gun would therefore be a big help to her. The alien protests that the gun is biocybernetically attached to his body and mind, and removing it would kill him - Lil calls him an idiot and says she's going to take it anyway.

Back in that other dimension, while Galactus assembles his planet-devouring equipment (he doesn't actually take big bites out of planets, he converts them to energy and consumes that), the Quwrlln decide they need to activate Plan B - contact their agent on Earth and have the super-heroes of the only planet ever to repulse Galactus come to their aid. That agent, as people who've read the previous issues know but new readers are not told at all, is Vindicator. He's in Toronto, in the middle of the fight, when there's a momentary lull and the heroes all regroup on the ground. They beat up a few stray aliens, Diamond Lil rejoins them with the alien's gun but doesn't describe how she got it, and Her briefly recaps the events of Marvel Comics Presents #35, the comic from two years previously in which she got on the Consortium's bad side and started this whole mess. The Chief Executive Officer of the Consortium offers the heroes three options - they can hand Her over, or, "honor barring such a transaction," she can just leave the planet and the Consortium will chase her in space. Alternatively, they'll take over the entire planet Earth.

Her decides to surrender, to minimise the danger to anyone else. But just at that inconvenient moment, the Quwrlln signal reaches Vindicator, the machine parts of his body take control, and he teleports all the most powerful nearby heroes (Vision, Her, Quasar, Guardian, Sersi, Box, Hercules, Windshear and himself) away to save the Quwrlln from Galactus. Thus the remaining seven less-powerful heroes are left to face the furious Consortium, while the others find themselves face to face with Galactus - the issue ends on another full-page picture to show us how big he is!


And so that's that. To be concluded in #100. We don't get a letters page in this issue; it looks like they had to add an extra page of story to squeeze in all the action. There are the usual adverts, but nothing interesting enough to be worth mentioning. It's a fun story if you take it in the context of the Alpha Flight series as a whole, but as a one-off read I just can't recommend it, it's much too impenetrable to the new reader, and there are way too many characters to understand what's going on unless you already know who everyone is.

Fabian Nicieza is one of the all-time greatest writers of Marvel Comics, but his short run as Alpha Flight writer never entirely clicked (at the same time, he was writing New Warriors, which was so much better). I think he was over-burdened with characters (the eight Alphans we see in this issue are just the tip of the iceberg), and had too many ideas that he never had the time and space to develop. He left the comic after #101, and it meandered on under two more writers I hugely admire, Scott Lobdell and Simon Furman, without ever quite reaching any great heights. Are Alpha Flight so difficult to write about?


Bonus trivia that doesn't come into this single issue at all - this is the second consecutive issue of Alpha Flight in which half the team are abruptly teleported away to another dimension by one of their own. In #98, Alpha's comatose associate Laura Dean woke up from the coma she'd been in for the past year and suddenly used her teleportation power to disappear along with almost all of Alpha's supporting cast - Persuasion, Shaman, Aurora, Witchfire and Laura's parents. And nobody so much as mentions it in this one, nor in the big celebration #100! I don't know if Nicieza had plans to follow it up, or if he was just asked to clear the board of a lot of extraneous characters so the new writer didn't have to deal with them, but it's very strange. Don't worry, they did come back eventually...

Okay, okay, you wanted two scantily-clad interstellar she-warriors, and I haven't given you a picture of Nova. Here she is, striking a few more of those weird poses that only Michael Bair could draw... 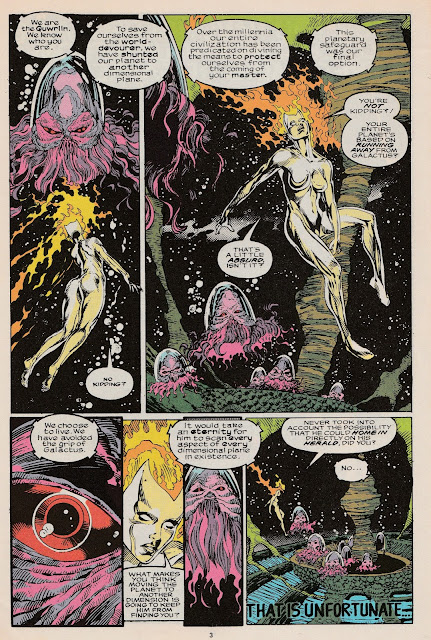 Give me a number between 2 and 3333, and I'll pull that comic from my collection and write about it for you!
Posted by Zoomy at 3:57 pm 3 comments: