In a really awesome development all round, I found Bobby Bear's Annual 1933 in the Oxfam shop in town today, for only £3! More than a hundred pages of comics, stories, puzzles and instructions for making a book-table with two leaves from a wooden packing case! Two of the filler stories are even early works by Norman Hunter that I've never read before! This completely surpasses even the 1950 Toby Twirl book that I found in another Beeston junk shop last year, and proves that I'm living in the land of antiquarian anthropomorphic animal annuals!

Now, please go out and buy some Kiwi boot polish. 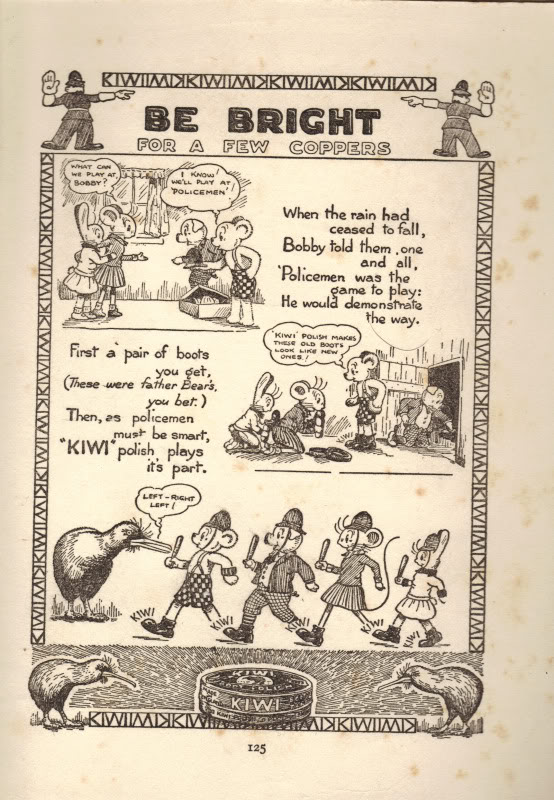 On an unrelated note, if you eat a lot of cherries, do they each count as one of your five a day?
Posted by Zoomy at 9:19 pm 10 comments:

Here's what I'm going to do. I did like the idea of going on X-Factor as a singer in Brazilian Mystery Cloak, but I don't think it's quite the career move for me - I disapprove of X-Factor (the TV show, I approve of the superhero comic, although the original incarnation was a lot better than the current one), but I did always enjoy Stars In Their Eyes, so I'm going to wait for that to come back. I could never decide whether to be Paul Simon or Meat Loaf (I don't think the world is quite ready for my Cher, which is the voice I do best).

No, what I'm going to do is learn to cook. I think I'm actually not a bad cook, for a bachelor - many of the meals I cook involve mixing two or even three packets of foodstuffs together - but I think I could be better. I haven't had proper suet dumplings since my dad died, and I'm sure it can't be difficult. I'm going to have proper ingredients in my kitchen cupboards, like flour and eggs and sugar and things. Maybe even spices! I've got a spice rack, after all, it'd be nice to put something on it. And I'm going to make stew. And casserole. That kind of thing. It'll be great!
Posted by Zoomy at 8:12 pm 2 comments:

I think my head's screwed on backwards

I'm having disturbing feelings of optimism about the new government of this country (I'm sure I'll get over it, don't you worry), and equally disturbing feelings of pessimism about memory competitions, mental calculation competitions and so on. I need to either find something else I can strive to be world champion at (because let's face it, life is meaningless unless you're at least trying to be some kind of world champion) or really make more of an effort to hold on to the memory title. But I'm still not really feeling like it. Consequently, tonight I'm watching the football and quietly enthusing about several very nice bits of the coalition agreement. Possibly I'm sickening for something.
Posted by Zoomy at 9:09 pm 7 comments:

There's a van that's always parked around here, with "Survey Solutions" written on the side. While it might be perfectly innocent, I prefer to believe that it's actually some shady government agency surveying my every movement and using an elaborate double bluff to try to cover its shady activities. I need to invest in some kind of lead-lined windows. Which will also help with insulation, it's cold around here at the moment.
Posted by Zoomy at 8:20 pm 1 comment:

It's a stamina thing, pure and simple. I hadn't spent a full day memorising competitively for six months, and by lunchtime I was done for. I got entirely acceptable scores in the first four disciplines, then it went 10-min-cards: 4 packs. 5-min numbers: 203 (only attempting 243 because I was very, very slow and I knew I couldn't do more than that without making a mess of it). Abstract images: 150 (again, that was all I attempted). Historic dates: 60-something. All a long way below what I can do if I can just stay more awake in the afternoon.

I set myself a modest target of at least beating Christian's score from Cambridge last week, and a 96 in the spoken numbers just put me over that level with one discipline to go, so I could safely attempt two fast packs of cards, safe in the knowledge that I had no chance at all of getting them right, but not really minding. And yes, I did make mistakes - just a couple in the first pack, and then found I couldn't even remember the first pair of cards in the second attempt. So I ended up with a final score in the low 6000s, which I suppose could be worse. But that's not the performance of someone who wants to win the world championship.

I don't think I do, to be honest. I'm seriously asking myself which is less offensive to my fellow competitors - not competing at all, or competing and doing badly. If I was one of my rivals, I wouldn't want to beat an obviously out-of-shape Ben, but I wouldn't want him to drop out and not give me the opportunity to beat him, either. I could get back up to world-number-one standard with three months of solid work, but... I can't see it happening.

Anyway, enough about me. We had seven competitors in Newport - John Burrows and Antonio Campo forming the Welsh contingent (yes, he's Welsh, despite the name. They have burrows in Wales too and there are at least as many Welsh people called John as people who call themselves Ieuan), me by myself as Team England, Idriz and Mattias from Sweden, Conor from Ireland and Roy from Hong Kong. Mattias continues to get great scores, improving on his Cambridge performance with 3000-points-plus to take second place - John was third and the new Welsh Champion. Arbiting was professional and excellent as usual, courtesy of Dai, Phil and Warren. Congratulations to everyone, and long may the Welsh Open continue!
Posted by Zoomy at 8:59 pm 1 comment: