Why does everything I own inevitably explode?

Had to buy a new vacuum cleaner today in order to keep my clean-this-pigsty-up-a-bit resolution. The old one started pouring smoke out of itself when I turned it on, and although I'm not one of those technological whizzes, I'm pretty sure that's a bad sign. I considered leaving it on to see whether it would either stop or go bang and destroy half the street, but decided to just go and splash out on a new one from Argos. It's good for the economy to buy new vacuum cleaners, I understand.
Posted by Zoomy at 10:07 pm 2 comments:

I was out of bed this morning in time for a few speed cards before going to work (it's official, my brain is four seconds slower in the early morning than in the afternoons) and now I'm all fired up to actually do some memory training this weekend. And also some house-cleaning, because the BBC News website are coming to film me on Tuesday. And I've also had an email today from Korean TV wanting to film me for a memory documentary. The whole fame and fortune bandwagon keeps on rolling! (On a very obscure kind of back road that few people are watching...)
Posted by Zoomy at 9:56 pm No comments:

Have you ever noticed?

That if you're typing an email to somebody called Jim, and your right hand accidentally slips one key to the left, you end up writing a sentence like "Hun, if I send you an amended file, can you include it in a new report?" Which completely changes the tone of the whole email.
Posted by Zoomy at 8:04 pm No comments:

I'm actually getting tired of seeing "Superhuman: Genius" in the TV listings. It seems to have been playing constantly on ITV4 for the last few months, and now tonight it's on ITV1 again. I mean, it's nice, but can't ITV make some new documentaries? And couldn't they buy "The Mentalists" and subject that to the same round-the-clock showing? "The Mentalists" is all about the world of memory competitions, and it's the kind of thing that motivates people to take part themselves. "Superhuman: Genius" just motivates people to tell me I'm extremely clever if they see me in the street.

Ah well, at least it clashes with Celebrity Big Brother Eviction, so nobody's going to watch it...
Posted by Zoomy at 8:38 pm No comments:

Since I've posted more than one blog entry criticising TV adverts that have no idea how to sell their product, I thought I really should praise comparethemarket.com, for their brilliant 'comparethemeerkat.com' ads. Now THAT's how to present a concept in a memorable way!

For the benefit of foreigners or non-TV-watchers, comparethemarket.com is a car insurance website, and their adverts consist of a meerkat explaining that his website, comparethemeerkat.com, has been getting a lot of hits by mistake. If you want to compare meerkats (size, hobbies and so on) go to his website, if you're looking to compare the market for car insurance quotes, check out theirs.

The best part of it is that they've really created a http://www.comparethemeerkat.com/ site! Someone's had a lot of fun making it, I can tell. If I wanted car insurance, I'd almost be tempted to use the comparethemarket.com website. Almost. I'd probably still just call Direct Line, to be honest. Their adverts are more convincing.
Posted by Zoomy at 9:40 pm 1 comment:

Yesterday I bought "The Suspicions of Mr Whicher", largely because I'd seen someone at work reading it, liked the title and then noticed it in the bookshop and decided to flick through it, rather than because I had any idea what it was about. Who needs fancy advertising techniques, anyway?

Luckily, it turned out to be brilliant - it's a detailed true account of an 1860 murder investigation, and what's best about it is the picture it gives of the very earliest days of police detectives. The developing vocabulary of detective fact and fiction is really fascinating, and the writer (Kate Summerscale) has a real knack for picking up on the little nuances of meaning in 150-year-old language. I'd recommend the book to anyone!
Posted by Zoomy at 8:48 pm 3 comments:

In the spirit of the genealogical research of last Tuesday, it seems only fair to write something on the subject of my grandmother too. My other grandmother, that is - not the one who starred in The Mentalists, wasn't born until 1920 and is still alive and well today, but the one who died when my dad was young and consequently doesn't get mentioned very much when I talk about my family. Her only fifteen minutes of fame, to the best of my knowledge, come in this 1948 article from a Sheffield newspaper:

"The parents were delighted, and none more than Mrs. S. Pridmore, of 72, Robey Street. She has ten children, nine boys and a girl. They are all members of St. Thomas's, and two of them are in the choir, but it was left to 17-month-old Georgie to represent them and give the daffodils to their mother."

And here's little Georgie himself, proving that aside from the moustache, my dad really did look exactly the same for his entire life! 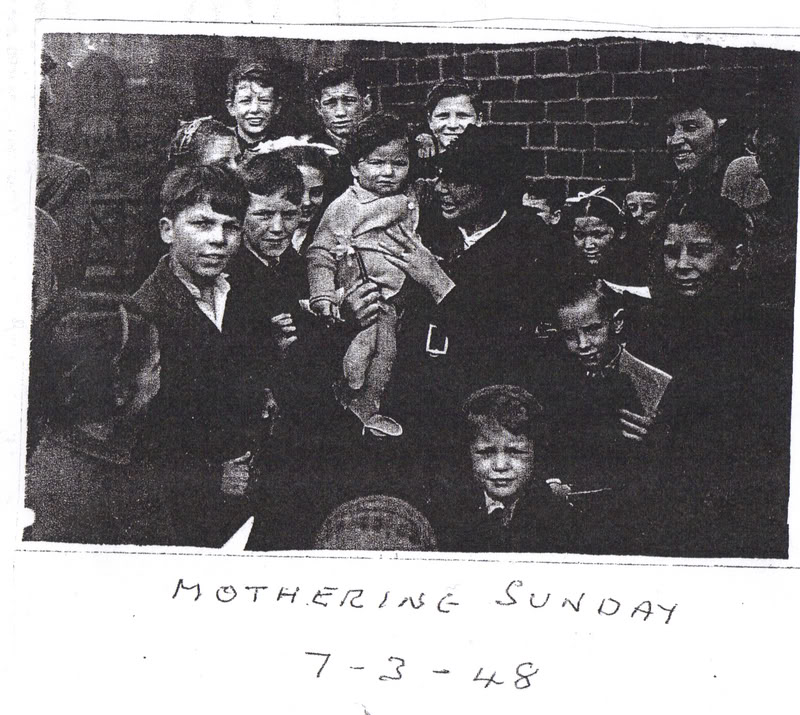 And finally, here's Mrs. S. Pridmore on the 1911 census, back when she was still Katherine Millership and a middle child of one of those wonderful enormous Sheffield familes, rather than spending her entire life from the age of 19 to 45 churning out offspring of her own: 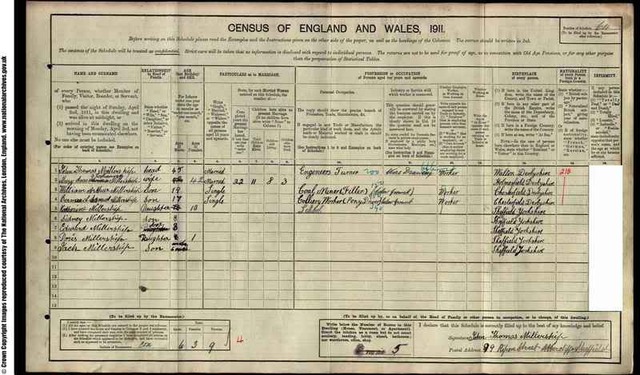 Let's preserve the memory of my long-dead Other Grandma! I'm sure she'd be just as big a hit with documentary-watchers if she was alive today!
Posted by Zoomy at 8:56 pm No comments: