And finally! The climax of every memory competition (nearly) 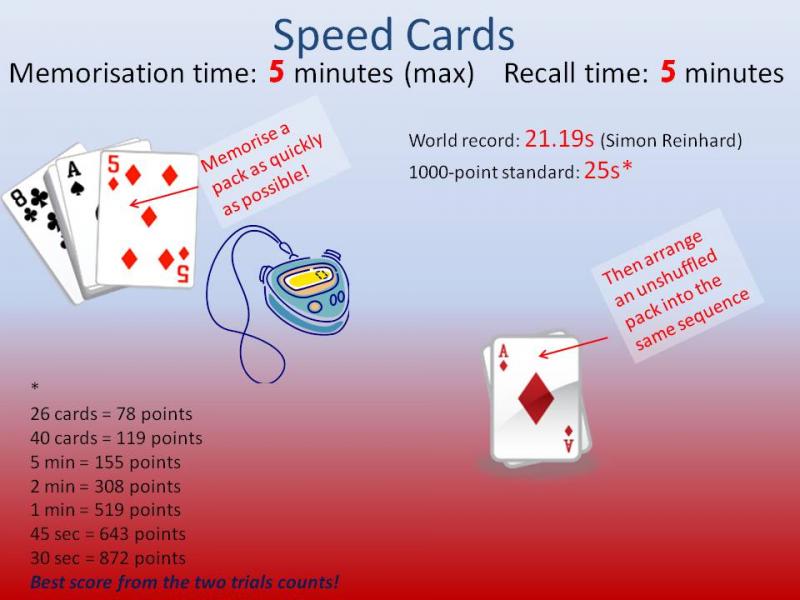 Speed cards is fun to watch and exciting to compete in and makes a great finish to competitions. But what would the scores be like if it was the first of the ten disciplines? Or somewhere in the middle? A lot of the time, the competitors have to get an okay-but-not-spectacular score, to make sure they finish in the position they're aiming for, so there's not always a lot of opportunity to go for that record-breaking fast time.

And speaking of records, when will we see a sub-20-second pack of cards? And on a related note, why was 30 seconds seen as the "four minute mile" of memory competitions for so long? Yes, it's a nice round number, but back in the day, people were really really serious about it as being our Everest.

Long long ago, back in 2006, there was a competition called the Speed Cards Challenge, which consisted of nothing but head-to-head speed cards. It was great, and should happen again. The XMT comes close, obviously, and it'll be interesting to see how the speed cards times go in the future with that - memorising on a computer screen is probably a bit faster than memorising physical cards; it's harder to drop them on the floor, anyway.

I might not hold the record any more, but do I hold the record for the most sub-30-seconds packs in competitions? I probably do, but I don't want to count in case I'm wrong...
Posted by Zoomy at 7:41 pm 4 comments: 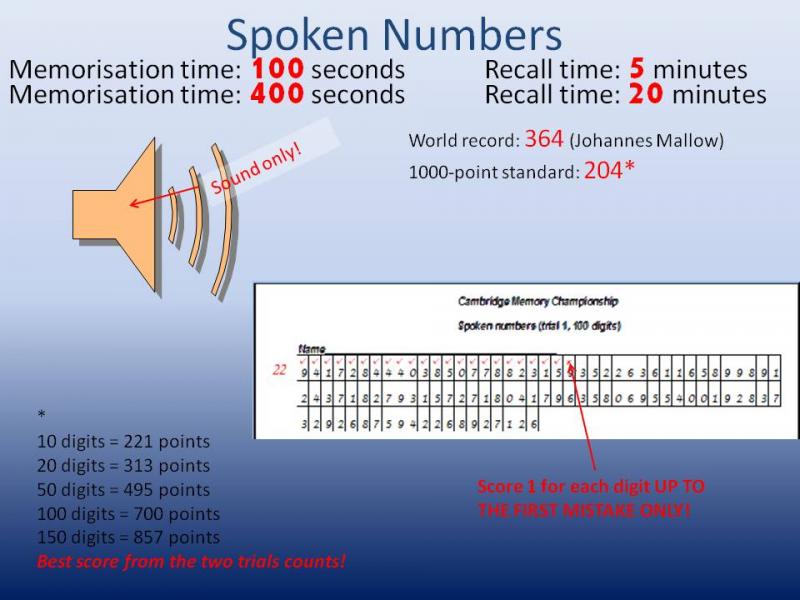 The world record is getting close to a perfect 400, which was the level at which they changed it from one-every-two-seconds to one-every-second, back in 2001. Will it be changed again? One every half second? Every three-quarters-of-a-second?

There's always the question of language - the attempt to provide the numbers in the language of the competitors' choice way back in 2005 didn't work as well as it might, but it was the right idea and it's strange that nobody's wanted to try it again. So, will it always be in English at every memory competition except the German ones?

I've always suspected that the people who are good at spoken numbers are the people who don't review their written numbers many times, but go through them slowly and carefully to start with. I can't really back this suspicion up with any kind of evidence, though - maybe I'll gather some one day.

The interesting question is why not have other spoken discplines? Or flashing-up-on-screen disciplines? Or, well, any kind of alternative to things written on paper? I can't think what that other alternative would be, but I'm sure there is one out there somewhere.
Posted by Zoomy at 7:53 pm No comments: