Hey, remember that blog post a couple of months ago when I found out that the tenth-best-selling toy of 1981 was something called "Kensington", which I'd never even heard of? Well, guess what I saw staring at me from the top shelf of a charity shop in Long Eaton today! 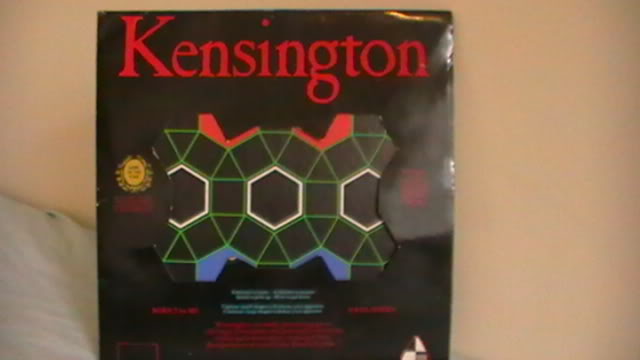 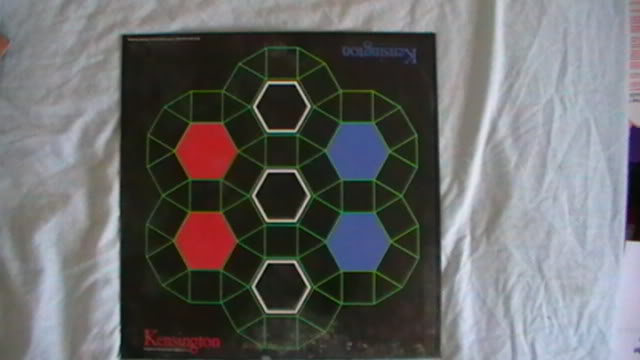 It's actually not a toy, as such, it's a board game! Packaged in a flat, square, cardboard sleeve exactly the size and shape of an LP record, the front cover proclaims it to be "Game of the Year" (it doesn't say which year) in five languages, lists the seven languages the instructions are translated into (Chinese and Arabic readers don't get to know that it's the game of the year) and lists various impressive catchphrases:

"Kensington is a really fascinating game, offering a formidable and potentially victorious challenge to such classic rivals as Chess, Backgammon or even Cards. Excellent value!"

I think the judgement of the last thirty years is that Chess, Backgammon and Cards have seen off the challenge from this formidable opponent. But hey, that slogan about a minute to learn, a lifetime to master sounds a little familiar, doesn't it? Othello had been launched in Britain just a few years earlier, using that same phrase. Does Othello merit a mention as one of the games that were destined to be blown away by Kensington? Nope, not a word. Indeed, the back of the pack, which tells the story of Kensington's creation in great detail, makes it out to be something entirely new, different, exciting and unprecedented in the world of games! 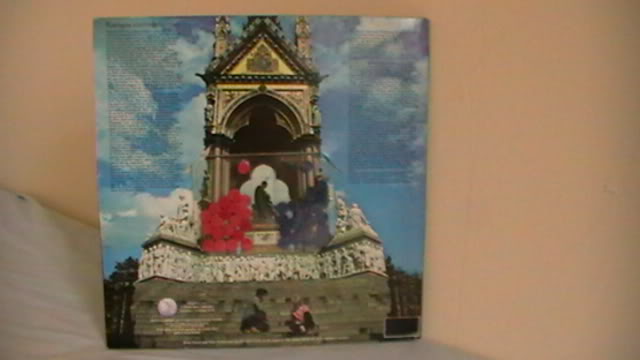 "Kensington," it modestly begins, "is the brilliant outcome of arduous research by two eccentric British friends to develop a game of pure skill that can be easily learnt and as enjoyably played by children and adults in each and every country of the world, irrespective of language or way of life. Not since chess and checkers (draughts) first appeared from the East a dozen centuries or so ago has there been such a remarkable breakthrough in the games world, where lately most of the running has been made by the trademarked leaders, Monopoly, Scrabble and Mastermind, all of which depend on a measure of luck."

It continues in this vein for a long time. What it doesn't mention is that in the late seventies and early eighties, the games market was completely deluged with "brand new" games of skill that were going to be much more popular and exciting than chess and draughts. Othello was the one that has stood the test of time, in its own limited way, but there were many, many more. Kensington's blurb ignores this completely. It doesn't even mention Nine Men's Morris, the traditional game that Kensington turns out to resemble very closely indeed. No, it attributes its innovative genesis to Brian Taylor and Peter Forbes, "the Rolls and Royce of 1982", depicted on the back cover playing Kensington on the steps of the Albert Memorial with very 1982 hairstyles: 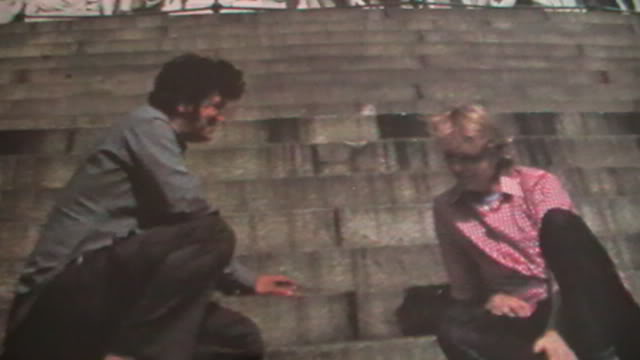 The inspiration for the game, apparently, came from "a volume of ancient Islamic patterns" found on a second-hand bookstall in Kensington, hence the name, and the rest of the description of its origin and creators is actually quite fun to read, so I shouldn't really be so rude about it. It's just that it clearly does believe that they've invented something that would completely revolutionise the board game world.

Open up the double-album-style packaging, and you get the instructions and an interesting photo of people of all ages and cultures playing the game: 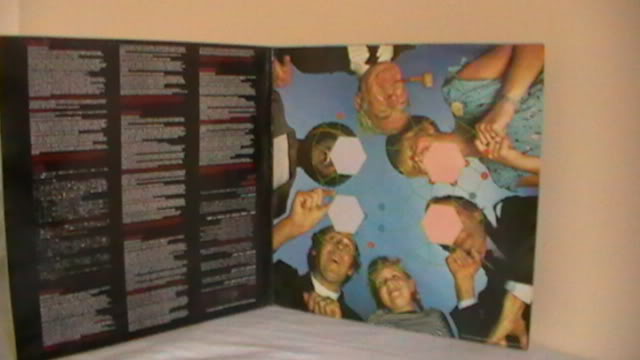 There's an old man smoking a pipe, a trendy young woman wearing a trendy young dress and a policeman's hat, a hatless policeman whose face is completely obscured by a hexagon, a young girl with pigtails, a vicar portrayed by either Robert Lindsay or someone who looks strikingly like him, and a black man in a rasta hat. They all look like they're having tremendous fun, except the man with the pipe. 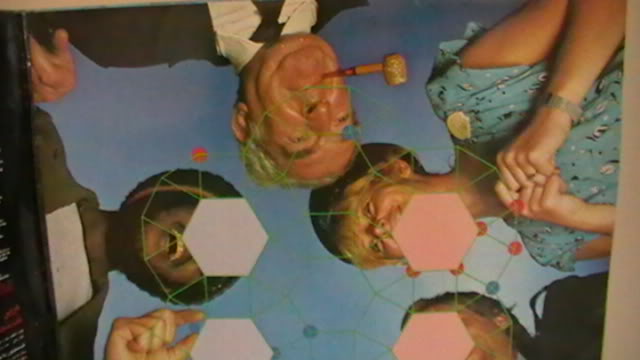 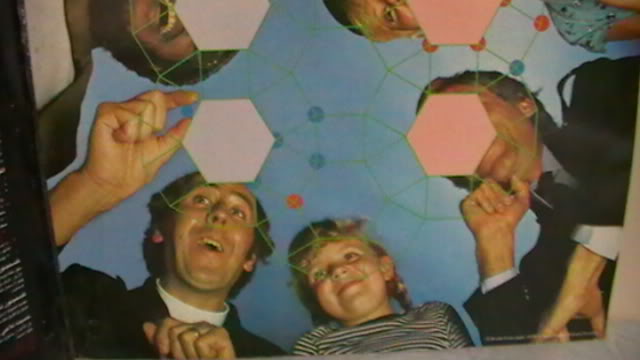 I'm sure it can't actually be Robert Lindsay. Citizen Smith had just been cancelled, it's true, but he can't have been so hard-pressed for acting work that he had to pose as a Kensington-playing vicar.

The rules can be found on the internet, here (the only thing it doesn't mention is the four-player or six-player variant, which simply consists of dividing the players into two teams and taking alternate turns). That website says that it's an excellent game, although the wikipedia page says it's somewhat flawed and one-sided once one player has gained an advantage (exactly like Nine Men's Morris, which it was based on).

So there you have it, that mystery's solved. It was a very brief flash in the pan that beat othello to the top-ten-games-of-1981 list, but disappeared into the limbo of lost board games quickly afterwards. That'll teach them to steal othello's slogan.


Edit: Hey, that's weird. That website I linked to, tragsnart.co.uk is mainly devoted to board games, and especially Kensington, but also has a page devoted to the comic book art of John Byrne, who I mentioned in my blog just yesterday. It praises Byrne rather more highly than even he deserves (even more highly than Byrne habitually praises himself!), but hey, he is a great artist and writer and he deserves some excessive adulation here and there.
Posted by Zoomy at 2:57 pm 1 comment:

Well, now I'm depressed. But in a good way.

Looking for something completely different in the comic shop today (it was sold out, but never mind), I came across the best comic I've read for absolutely ages. It's called "Whatever Happened To The World's Fastest Man?", by Dave West, and it's hugely recommended to everyone who's reading this blog, whether you like comics or not. Especially if not. What are you doing reading my blog if you don't like comics?

It's a very downbeat kind of story, and it did leave me feeling depressed, but only in the sense of having read a real masterpiece. I'll make up for it by reading something more bland and cheerful (I've started on my complete collection of Alpha Flight, like I said I would - John Byrne's initial stories are not at all bland, but certainly cheerful enough to cheer me up, and the unrelenting misery of the Bill Mantlo issues that come after it is something I've got accustomed to by now, so there's no need to worry there).
Posted by Zoomy at 9:17 pm 1 comment:

Know what I'm going to do this Easter weekend?

I'm going to read the entire 130 issues of the Alpha Flight comic. I haven't done that for a fair few years, and it's always good fun.

I'm going to do other things too, but I thought I'd share that particular ambition with you. And now, even though it's late at night, I'm going to go and memorise some binary digits. I've just very nearly got a perfect 468 decimal digits (two images I was blank on, both on the same row) in very nearly five minutes (stopped the clock at 5:00.34, which is close enough really), so I'm happy.
Posted by Zoomy at 10:22 pm No comments:

Wow, that was a good game of football. Arsenal-Barcelona, I mean. Great result, too - yes, it was never in a million years a penalty, but all in all I don't think they deserved to lose. They played really well, against possibly the best club in the world.

Also, it's nearly Easter, and I'm in the mood to spend the long weekend doing some marathon memory training. I'll also do some memory competition organising too, since Cambridge is bearing down on us...
Posted by Zoomy at 9:42 pm 2 comments:

ie "Double deck or bust" and "Double-decker bus". That was the weird original name for the final event in the US Memory Championship in which the contestants have to memorise two decks of cards in five minutes. Then they recall them, taking it in turns to say the next card, and the last one to make a mistake wins. Nowadays they call it "Double Deck o' Cards", which is still weird but perhaps slightly less so. Of course, the top memorisers, if they weren't so polite, would scoff at the concept of memorising only two packs in five minutes, and say that it would need to be at least five packs, maybe more, for there to be any chance of anyone making a mistake. And actually, we're getting to the point where the top Americans are going to be flawlessly memorising their double deckers in five minutes soon, too. They'll have to change it to a triple deck o' cards.

The weirdest two-packs-of-cards record, though, is the one that I've been asked to try to break at the Mental Calculation World Cup's evening show in June. The rules are unusually precise - you have two separate packs of cards in front of you, and you have to simultaneously turn over one card from each pack at a time, and memorise them in the fastest time possible. Single sighting only, spoken recall. Dominic invented it, and holds the world record, set in 2001, of 3 minutes, 37 seconds.

I did think, until I looked it up just now, that this was a record that Dominic and Gunther exchanged between themselves for a while, knocking a second or two off it each time, but it seems I must have been thinking of something else. I did attempt to break the record back in 2004, also at the MCWC, but I was still relatively new to my card-memorising system back then, and I couldn't do it. But I think I've improved a little over the last six years, and I could probably do it this time without making a complete public spectacle of myself. The time to beat is really, really easy and it only stands as a record because nobody else has ever tried to break it. Although I probably will make a complete public spectacle of myself anyway. I'm rubbish at memory performances in front of an audience.
Posted by Zoomy at 9:40 pm No comments:

Enough with the numbers

Okay, I'm going to stop posting my training scores every night now. I think I've got into enough of a rhythm with the daily practice that I don't need the motivation of potentially having to reveal to the blog-reading millions that I skipped a day. Thanks for your tolerance, people.

Hmm, I've just been watching the last five minutes of "Wonders of the Solar System" while waiting for Match of the Day, and I notice that the presenter is credited as "Professor Brian Cox". From the presenting style and what he looks like, I'd assumed he was some kind of teen idol pop singer who'd been drafted in in an attempt to make astronomy more appealing to The Kids. I must be getting old.
Posted by Zoomy at 9:29 pm 4 comments: