What a memorable day!

Wow, this was awesome! Twelve brave British memory athletes gathered together today at the office of Peak to compete in the first ever national Memory League Championship! 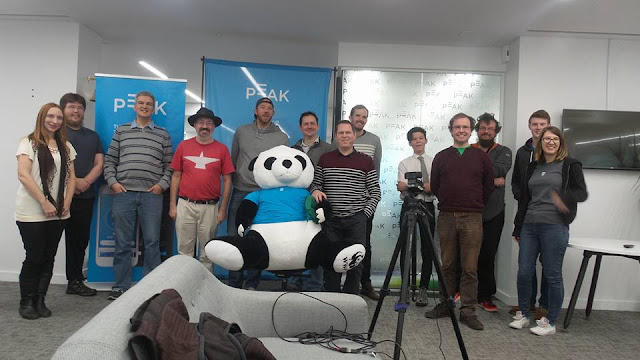 Not shown, but the awesomest of them all, is Simon Orton, who was keeping everything ticking over from Australia! Also deserving of a hearty round of applause is Dianne See from Peak, who's been kindly arranging everything about the venue!

You can see all the results here - we started with a pre-qualification tournament to sort the entrants into four seeding pots, then randomly drew one of each pot into each of the three groups. Then in each group it was all-play-all in a best-of-five match [first discipline randomly chosen from the five options with each player having up to two vetoes, loser of that chooses the second discipline, thereafter choice alternates - I'll write it up in more detail when I'm not so tired!] to give us a quarter-final lineup of the top two in each group and the two best third places.

The quarter-finals happen tomorrow morning, but today has seen some amazing scores and some thrilling matches; standing out in the first category a perfect 50 words in 53.45 seconds by Katie and 30 images in 14.90 seconds by Clay - they both came close to breaking the world record in other attempts too! In the 'thrilling' section were some fierce duels between Dan E and Gordon, and Dan H and Melodie - the latter two both new to the world of memory competitions and I hope having a whale of a time.

I do hope that this unprecedented gathering of British memory folk (not able to compete but watching the fun was Jake O'Gorman, with Phill Ash also at least hoping to drop in and say hello, and several others who just couldn't make this weekend too) will lead to greater things not just in this super-cool kind of memory competition, but in the more boring kind too!
Posted by Zoomy at 6:00 pm