Spoilers - we lost. But that's okay, because (as they flatly refused to allow me to say) we really were all just there to have a good time and create an entertaining programme for everyone, and I'm pretty sure we succeeded at that!


But the most interesting news in the world of mind sports right now is that the AlphaGo computer has repeatedly beaten the world go champion! This is quite a cool thing for computers everywhere, because even though all the best human players of my favourite board games have been long since surpassed by what machine minds are capable of, go has proven quite stubborn in resisting the cybernetic invasion. And incidentally, remember a couple of years ago when I said I didn't know what the company Demis Hassabis sold to Google did, if anything? Turns out this is what it did.

You can watch the match here - you know, if you've got six hours to spare. There really ought to be a thing where you can display the game on a blog like this and click to advance a move. There probably is, but I can't find one on the internet that doesn't talk about possible copyright violations if I put the game on here, so I'll play it safe rather than get in trouble.

I can quite see how the unfortunate human champion Lee Sedol is at a disadvantage here; even if AlphaGo isn't objectively a great player, a computer is bound to play completely differently to the human opponents he's played before. Plus it's like being a human memory champion going up against a chimpanzee - it's really not a story if the human wins, so he might as well go down in history as "the first go champion to lose to a computer". It didn't do Garry Kasparov any harm, anyway.

I don't play go myself; I've always struggled to understand the basic concepts of it, so it's one of the few games at the MSO I never even competed in for the fun of it. I know enough to be familiar with terms like 'to make two eyes', meaning to have an enclosed area with two empty spaces on it so that your stones can't be captured, which is why any mention of go always reminds me of a sequence in my favourite webcomic Order of the Stick, many years ago, that made me squeal with delight at the cleverness of it being titled "Two Eyes in the Dark" - it centres around the Creature in the Darkness, who consists of a pair of eyes shrouded in darkness and at this point is being gradually guided round to the heroes' side by O-Chul and his extended go metaphors. This is a subplot that's still bubbling under the surface of the comic, incidentally, all these years later - the great thing about OOTS is how long-term it is. 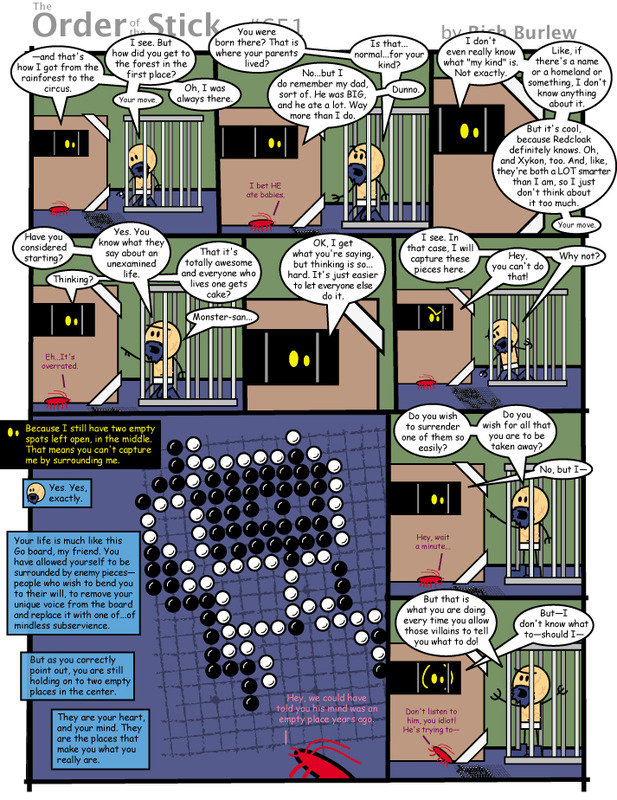 There might also be copyright issues with posting that comic page up there as well, of course, but you can't play it safe all the time. Now go and buy all the OOTS books, you'll love them!
Posted by Zoomy at 12:48 pm

First, congratulations on giving us a great show on SuperBrain. That was quite dramatic. They almost had me thinking those bombs were really going to explode! They know how to milk the suspense.

That AlphaGo match is incredible. I've been a close of follower of AI (especially computer chess) for a long time, and I find such things fascinating. In fact, I was sitting here playing a computer vs. computer chess game using a couple of my dedicated units (both Radio Shack computer chess sets), while I was watching bits of the AlphaGo video. Because PC chess is already beyond human ability, I knew it was a matter of time before computers caught up to humanity in Go (although I thought it was going to be a few more years).

Thanks, Tracy! I really loved the bomb challenge, it was a perfect example of how to make memorising numbers look fun and exciting!

Just started Order of the Stick and it seems phantastic. Just what I was looking for! Thanks, Zoombama!