How To Be Topp 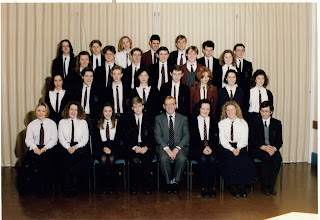 Hey, look what I found! Someone started up a Queen Elizabeth's Grammar School group on Facebook, and it motivated me to dig up this old class photo from 1992, when I was in the fifth year. That's 15-year-old me at the bottom right, looking down at the floor (and not at the boobies of the girl next to me, despite what everyone says when they see the picture). Yes, I had hair once. No, I never had a good hairstyle, unless you count my brief flirtation with spiky hair in the late eighties. But we do need to resurrect the nickname "Priddy the Hedgehog", don't you think?

Also, could someone please give me some money? Enough to go to Niebüll for the weekend and hang out with memory people at the North German Championship? I've been trying to justify to myself spending the money on the trip, but without a job it's hard to convince myself that it's a good idea. Maybe I'll rob a bank.
Posted by Zoomy at 7:50 pm

Wow don't you all look young! And why does that picture of Jimmy remind me of Dr Smith out of Lost in Space? And why does Tom's head look like it's too big for his body?

I love Jimmy's raised eyebrow - it does make him look quizzical and intelligent, like some sort of Scottish mad scientist. I'm not sure what Tom's facial expression is supposed to look like - possibly he's whispering something to Wilky, or maybe he just always looked like that.

I was worried for a second that I was the only one wimpish enough to be wearing my jumper that day, but Miles is wearing his too, and he was tough, so it's okay. And celebrity-spotters might be interested to know that standing directly behind me is Helen Wikeley, vet on Rolf Harris's Animal Hospital a few years ago.

P. S.- You look more like a normal human being without the hair.