The Last Night of the Proms!

Lord, grant that Marshal Wade/ may by Thy mighty aid,/ victory bring! We really need to re-insert that verse into the national anthem. It's not quite as cool as the obscure verse of the French national anthem that denounces Bouillé and his complices, but it's still a lot of fun. Frustrate their knavish tricks! Crush the Scots! Deutschland, Deutschland, über alles!

(There was some brandy left over from putting in the fruit cake I baked earlier, and I foolishly drank it tonight. Much stronger stuff than I thought it was.)
Posted by Zoomy at 11:10 pm 4 comments:

As fast as you can

I said I'd make a cake for some kind of work-related charity cake stall, so that's been my excuse for not doing anything memory-related today. It's cooking now, and filling the whole flat with a pleasant cakeish aroma. I'd make a good baker - it's a profession that requires the wearing of silly hats and the eating of lots of tasty foodstuffs. Why have I wasted so many years being an accountant-slash-memory-champion?
Posted by Zoomy at 8:29 pm 1 comment:

Just to complain a little bit more about the new Broons/Oor Wullie collection, because I can't read an extremely entertaining and enjoyable compilation of long-out-of-print comics without whining that I want more from it... This latest volume is larger than the fourteen previous ones, in the sense that the pages are physically bigger. I have no idea why - the reprinted comics are the same size as ever, there's just more white space around the edges. But the number of pages is sharply reduced again - the first one, back in 1996, had 126 reprinted Dudley-Watkins-drawn strips, then they settled into a pattern of roughly 120 every year until 2006, when it shrank down to around 100 per compilation. This year's has 83. Yes, I counted them.

I mean, are they trying to test just how little work they can put into these books and still get people to buy them? If so, I'm worried, because I'll continue to buy them however small they get, and I'm sure everyone else who buys the things will do the same. It's not like they're running short of comics to reprint, because Watkins drew a LOT of them - by my count there are about 1800 still to appear in these annual collections. Aren't they satisfied with another fifteen-to-eighteen years of income before they have to test the waters with a Watkins-themed Beano or Dandy compilation? Heck, by that time I'll be crying out for a Ken H Harrison tribute book...

Well, there'd better be more than a hundred in next year's book, or I'll have no alternative but to whine in my blog again. And I don't think anyone wants that!
Posted by Zoomy at 9:25 pm No comments:

That in pole vaulting, there's no rule specifying how long your pole has to be? I would have thought there would be.
Posted by Zoomy at 8:59 pm 9 comments:

I've got a 'teach yourself Swedish' course, but I haven't got round to trying it out yet. I'm pessimistic about my chances of being able to make myself understood in Gothenburg at the end of the month - from what little I know of the language, I'm pretty sure I won't be able to get my tongue around the vowel sounds or tones. Maybe I'll just speak Japanese to everyone there. I've got quite good at Japanese.
Posted by Zoomy at 7:50 pm 1 comment:

People persistently find this blog searching for cartoon-related topics on Google. I need to write more blogs about old cartoons, and especially the ones released on cheap knockoff videos, fast! I haven't toon-blogged for years, actually. Right, from now on, this blog is nothing but cartoons!
Posted by Zoomy at 7:48 pm No comments:

Return of the ukulele

I went into Nottingham today for no particular reason, and was walking through the Victoria Centre when I heard the sounds of ukulele music. It turned out that the music shop were having some kind of ukulele event, including free lessons/singalongs with the guy who wrote my teach-yourself-ukulele book. He even recognised me, too, although he seemed doubtful when I suggested he might have seen me memorising things on the telly and asked whether I do cabaret or anything like that.

Still, I know an omen when I see one, and clearly this means I should stop wasting time practicing memorising things, and start practicing the ukulele. I might even join the Nottingham Ukulele Group, which is probably going to be formed shortly by someone else who was there today.

I appreciate that I'm probably never going to be the World Ukulele Champion, both because no such title exists and because my fingers are generally clumsy and useless, but it would almost certainly be fun anyway...
Posted by Zoomy at 7:47 pm 3 comments:

The latest collection of classic Broons and Oor Wullie comics is in the shops now! Well, according to Lew Stringer, who knows about these things, it's been out for a month, but this is the first time I've seen it. Anyway, once I'd read the comics, my eye was drawn to the small print on the first page - "While every effort has been made to preserve the authenticity of the pages reproduced here, for logistical reasons, certain minor adjustments have been made."

That's strange, I thought - previous collections haven't had a disclaimer like that. And what are "logistical reasons" when you're reproducing old newspaper comics? Well, I had to investigate further, and here's one of those minor adjustments that were logistically necessary! Here's one of the reprinted strips from this year's collection: 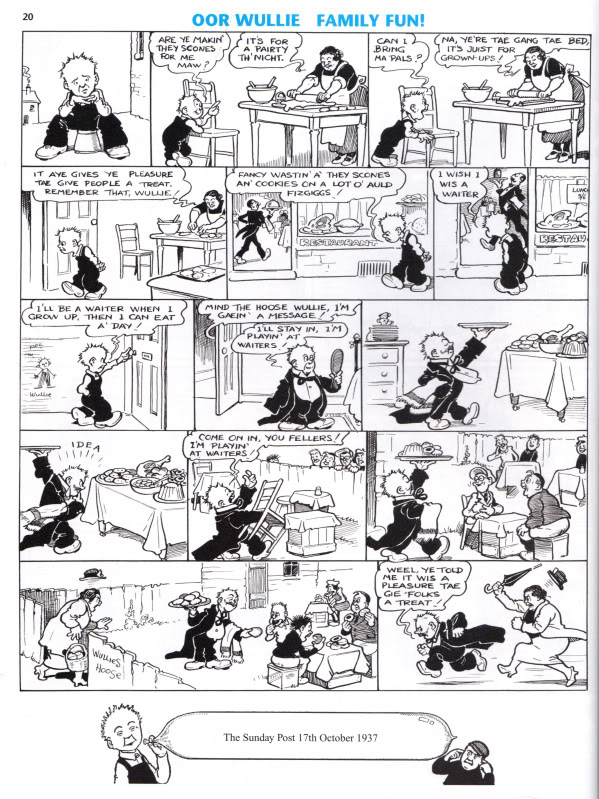 And here's the strip as it originally appeared in 1937: 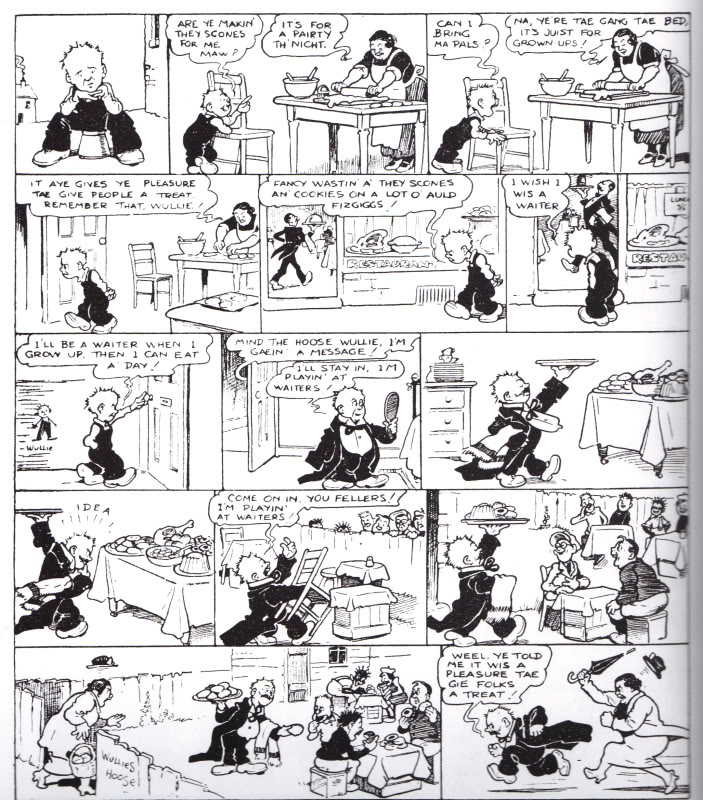 Spot the minor adjustment? Now, don't get me wrong here. As a general rule, I do think racism is a bad thing, all in all (I would hope that goes without saying, but you never know). But I don't like the idea of reprinting old comics and whitewashing out the offensive racial stereotypes. Besides which, that unfortunate black member of Wullie's old gang (I've seen him referred to as 'Ezzy', but he's unnamed in all the comics I've seen - Wullie's original gang were a nameless horde, hugely indebted to the Our Gang movies, for the first couple of years) wasn't there in an attempt at racism, he was an attempt at political correctness, 1930s-style, and inclusion. He's drawn like that because that's how you drew black people in those days.

And okay, there were some Oor Wullie strips where his purpose is to play up the usual comedy-nigger clichés, but he's always just one of the gang, and a valued member at that. Here's one of his greatest moments, where he's elevated from the ranks of the horde to become Wullie's most loyal sidekick: 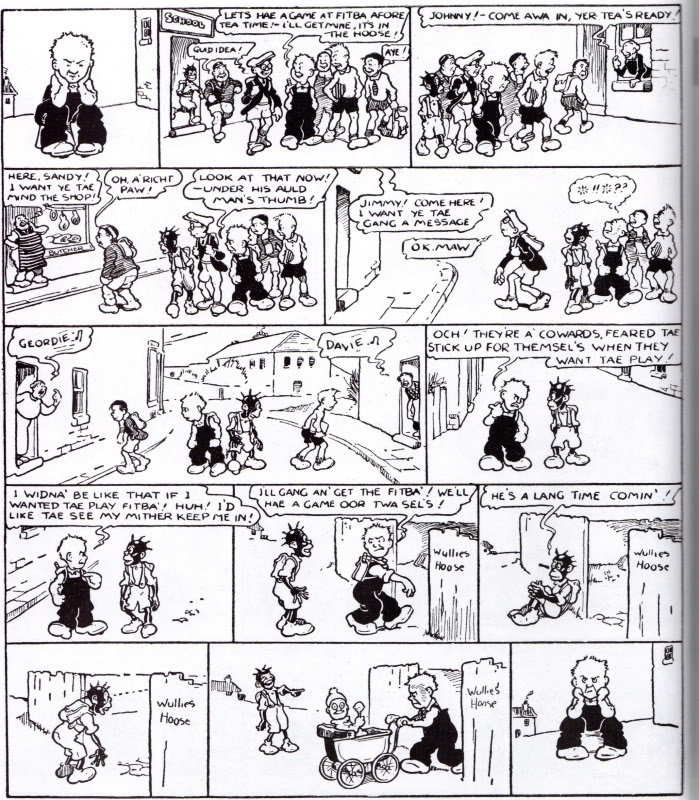 (Note the fat one called 'Sandy' in that strip, by the way - after a couple of months as 'Geordie', he became 'Fat Bob', shoved the rest of the old gang aside, and the comic evolved into the familiar lineup we know and love today)

So here's to Ezzy, or whatever his name was, and I want you all to go and draw him back into your copies of "The Broons and Oor Wullie - Family Fun Through The Years"! For logistical reasons!
Posted by Zoomy at 10:05 am 2 comments: