There's two weeks to go until the ninth Friendly Memory Championship! I'm going to write a daily series of posts about the ten disciplines you can face at the competition.

We start with Random Words! 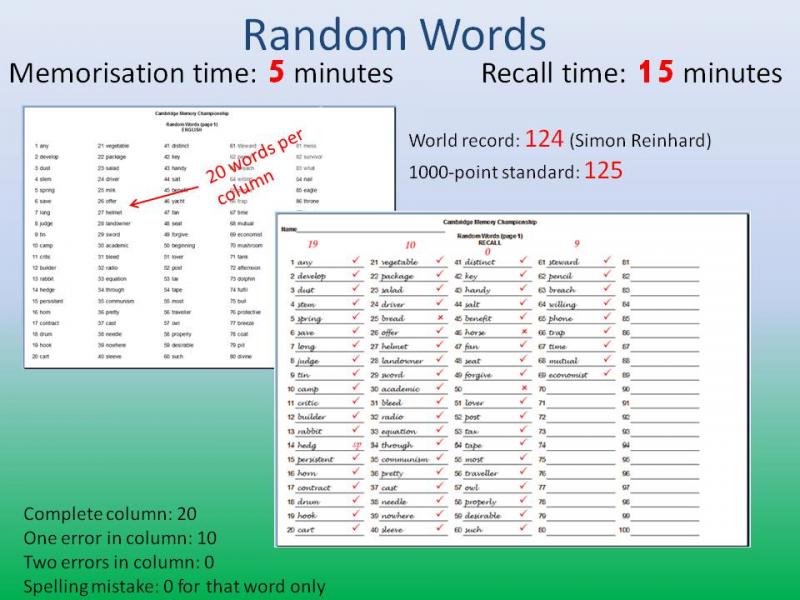 Random word memorisation has been part of memory competitions right from the start, but it was always 15 minutes' memorisation time until the shorter alternative National Standard competitions were introduced in 2006. The rule that the words come in columns of 20 has been there for a long time (although I found an old set of rules on the internet that says columns of 25), and nobody's ever suggested it should be any different (although I think some children's competitions have used 10).

The rule about spelling mistakes not losing you the points for the whole column came in a bit later, probably at the suggestion of Dominic O'Brien (who's dyslexic), but also having the advantage of not penalising people too much when there are spelling mistakes in translations (which hopefully doesn't matter so much now that the translators can check their spelling on the internet, but you never know...)

Rules specify that the words should be "generally known", and that most of them should be concrete nouns that you can create a mental picture of easily. Despite the increasingly specific rules over the years, some words events are still easier than others. We try to keep it consistent, though. I've always thought that Germans would be at a disadvantage, since in English a lot of words can be used either as a noun or a verb, allowing a bit more flexibility, while in German they're either one or the other. But German-speakers tend to get much higher scores in words than I do, so what do I know?

But maybe it's just because I do words in a different way from most people? I think a lot of competitors are more rigid than me about how they do it - turning each word into an image and putting a set amount of images on each location on a journey. I've always tended not to use journeys at all, and just make a story out of the words. Although lately I've been more journey-minded, especially in the Extreme Memory Tournament. It's probably better in the events with the shorter time limit.

Words is one of the 'natural memory' disciplines, as opposed to 'system memory' like cards and numbers. You don't have a finite number of possibilities that you can assign an image to in advance. So there have tended to be people who are naturally better at the words than others - it's an interesting phenomenon that someone should study some time.

Anyone got any words-related anecdotes to share?
Posted by Zoomy at 7:10 pm No comments: