This is a public apology for not typing up my transcripts from last Saturday yet, like I said I would. I seem to have spent the whole of the last three weeks or so not typing transcripts, and it's inexcusable. I'll do it tomorrow, if I can be bothered.
Posted by Zoomy at 10:43 pm No comments:

With Cambridge out of the way, I can start planning for the German championship in Hamburg! July 31st and August 1st! And if I'm going to do well in this, the second-most-important memory competition of the year, I'll need to spend the next few weekends getting back into the habit of 30-minute memorising. A half-hour cards, half-hour numbers and half-hour binaries, all in one day, really takes it out of you, but once I've done it a few times, my brain remembers the knack of keeping the concentration going for that length of time, and before you know it I'm all ready for the world championship and the hour-long disciplines.

I really want to do well in Hamburg - historically I always used to do badly at the German championship, but then I had a great one in 2007, couldn't afford to go last year, and I think it'd be nice to win it this time...
Posted by Zoomy at 10:17 pm 1 comment:

SAS Furniture, down the road! That shop's been there forever, and now it's turned into Bubble-It! I don't even know what Bubble-It sells! Maybe it... bubbles things. Anyway, it doesn't sell furniture, probably, and it's an outrage!

As I mentioned in a blog only a month or so ago, SAS Furniture has always been on the corner there. Whenever we used to drive into Beeston on the way to Grandma's house (being modern, and keen to avoid big bad wolves, we took the car via Beeston instead of skipping through the woods), we'd go past the place. What with that and Woolworth's, I'm getting extremely fed up with the modern age. When I work out exactly who's responsible for the entirety of the world's problems, I'm going to go around to his/her house/bungalow and shout at them. Loudly.
Posted by Zoomy at 9:15 pm 2 comments:

He hits ye and ye gang tae the hospital

One interesting thing you notice when you watch enough cartoons and read enough comics from the olden days is that plagiarism isn't as modern an invention as you might think. Even in the thirties, when it was still possible to think up a new gag that hadn't been done before, you'd still see examples galore of stealing a joke from a rival and hoping to get away with it.

Even so, it surprised and entertained me to find the original (or maybe just an earlier iteration) of an Oor Wullie strip in an earlier Popeye comic: 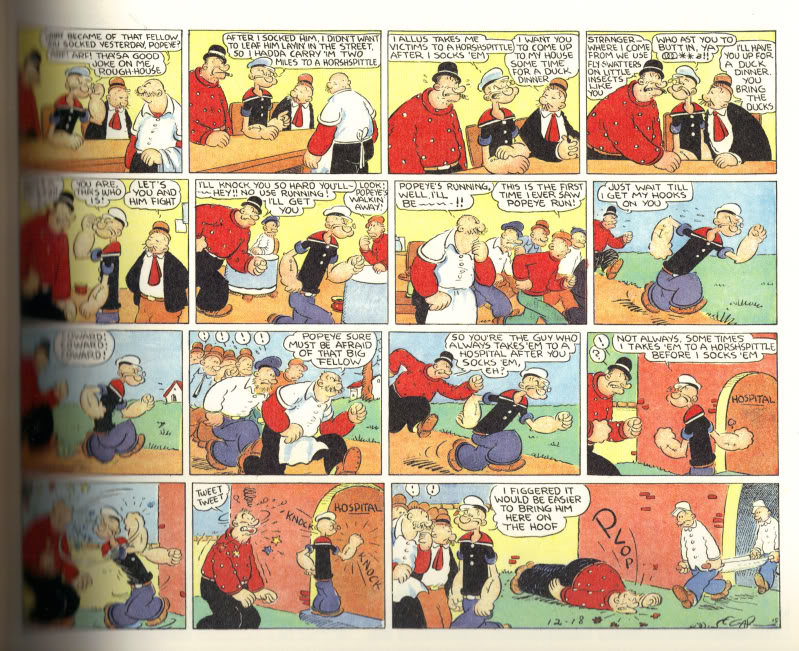 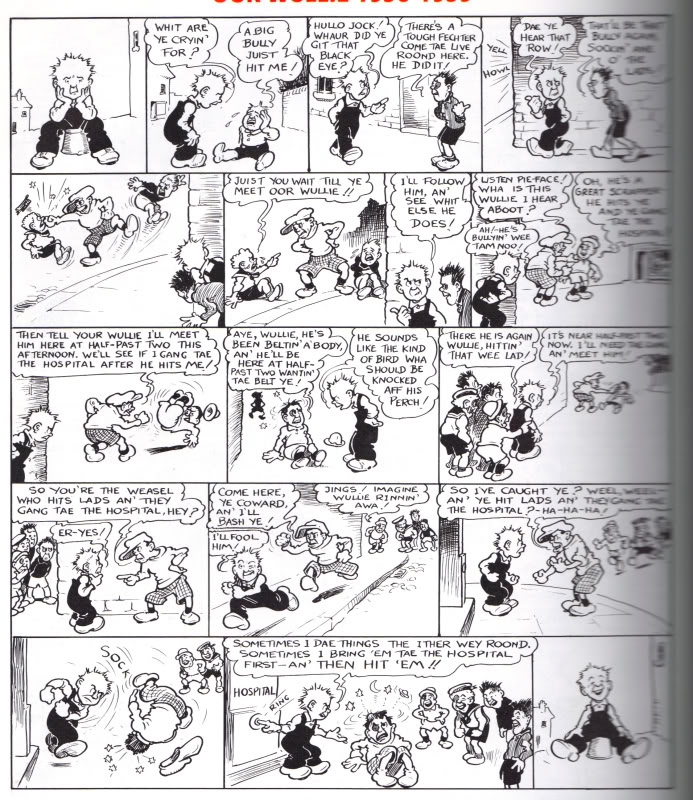 Five years and the Atlantic Ocean between them - I wonder if there's a missing link here? I don't think Thimble Theatre had made it to British newspapers yet at that point, huge though it was in the USA, and I don't think that gag was ever used in the animated Popeye cartoons...

See, this is the kind of thing that really fascinates me, so I thought I'd share it with the world in general.
Posted by Zoomy at 8:39 pm 2 comments:

Further news from the weekend

I realised today that while I was trying to make the attendance at the CMC sound as international as possible, it didn't occur to me that one of the English competitors had an Indian name. And now I'm worried that people think I'm either some kind of racist, or some kind of excessively politically-correct berk, or both.

Another thing I forgot to mention is that although I didn't see fit to provide any prizes for this year's competition, I did get some extremely cool gifts from competitors - Dai gave me several cool and interesting coins to add to my collection (an old-style 5p to add to my 10p and 50p!) and Christopher presented me with a giant chocolate gold medal, by far the best and tastiest medal I've ever got from a memory competition!

I should also mention the fun with the window in the competition room - it had been recently broken and patched up with brown tape, and half way through the championship we found out why. It seems the window has trouble staying open and slides down closed of its own volition. Luckily, my screeches of "Catch it!" and James and Jenny's quick reactions saved it from shattering any more panes.

And just to save the best till last, I heard today that Marco proposed to Jane in the evening after the competition, and she said yes! So, you see, memory competitions lead to romance! Another reason for everybody to come along and take part!
Posted by Zoomy at 8:48 pm 2 comments:

Anyway, here's what I've been doing this weekend. It was othello on Saturday, and lots of people turned up again - 15 of them, plus a non-playing Adelaide and Aubrey, who was in the country for once and able to organise the whole Cambridge MSO. Which all seemed to be a roaring success, except that there were too few events on the Saturday (the stratego was cancelled) and too many on the Sunday (the draughts was extended to cover both days). This led Aubrey to greet me with ominous questions like "Do you actually need tables for the memory competition?" and "There's no real reason why it has to be indoors, right?"

The othello itself went reasonably well, all in all. I beat Geoff in the first round, which I seem to be making a habit of lately, then lost to Imre and David, who are both much, much better than me, but who I manage to beat once in a while and was hoping to this time as well. Still, I was on four wins out of six before the final round, and just needed to beat Jeremy to end up in joint third with Geoff (who beat Imre, who in turn beat David - if you're interested in the statistics that don't involve me, you should probably check out the British Othello website instead, I'm too self-centred) and keep my undeserved comfortable lead in the BGP. But I lost the decisive game 33-31, ended up a comparatively rubbish joint fifth with Ian (not that Ian is comparatively rubbish compared to Geoff, although I can see how you might draw that inference from my last two sentences), and am now only seven points clear of David. Still, maybe I'll win or be the only person who turns up to the last two tournaments.

After the othello, I decided it might be a good idea to check out the possibility of alternative venues for the memory the next day, to avoid sharing a room with backgammon players or sitting outside in the courtyard on those chairs with little wobbly mini-desk attachments. In the spirit of nothing-ventured-nothing-gained, I went into the Royal Cambridge Hotel at half past seven on Saturday evening to ask the receptionist if there was any chance of getting a cheap conference room for nine o'clock on Sunday morning. Funnily enough, they didn't seem to think there was anything at all unusual about this request, and provided us with a perfect venue - much more swanky than the usual location, and not at all expensive, especially since Aubrey chipped in with a part of the cost from the MSO funds.

The international turnout of the memory competition was extremely impressive - two Swedes (one of whom has an Albanian name), four Germans (one of whom has a French name), an Italian (who lives in London and whose accent veers between Italian and cockney at random), one Welsh and even two English participants! We really need to get more British people involved in memory competitions.

We also had a huge and me-very-grateful-making turnout of helpers who ran the competition and marked papers promptly and accurately, ensuring everything worked out exactly the way it should, ran on time and suffered no major disasters and hardly any minor ones either (slight technical hitch or two with the spoken numbers, but nothing worse than usual) without me having to do much real work at all!

Star of the show was Dennis Müller, who's only been doing memory stuff for six months and is already confident enough to attempt a 20-second pack of cards and talk in terms of beating me next time we go head-to-head (Hamburg, end of July). It's a bit worrying, but on the other hand, really great. I look forward to seeing how well he does after a bit more training!

So, a good time was had by all! Now I'm going to go to bed, because it tires you out, organising events. Normality resumes tomorrow!
Posted by Zoomy at 4:32 pm 1 comment: