Okay, we get an extra bonus blog post tonight, because I've just noticed something weird about that Comic Library I bought today. It's something that will only be of interest to roughly three other comic fans in the world, none of whom read my blog and all of whom probably know about it already, but I thought I should share it with all of you anyway. I'm generous like that.

However, Comic Library no. 36, Baby-Face Finlayson in "Gold Robber" (which for some reason I never had in 1983, although I did have the hugely inferior "Count Whackula", starring Dennis the Menace, which came out in the same month), has this on the inside front cover: 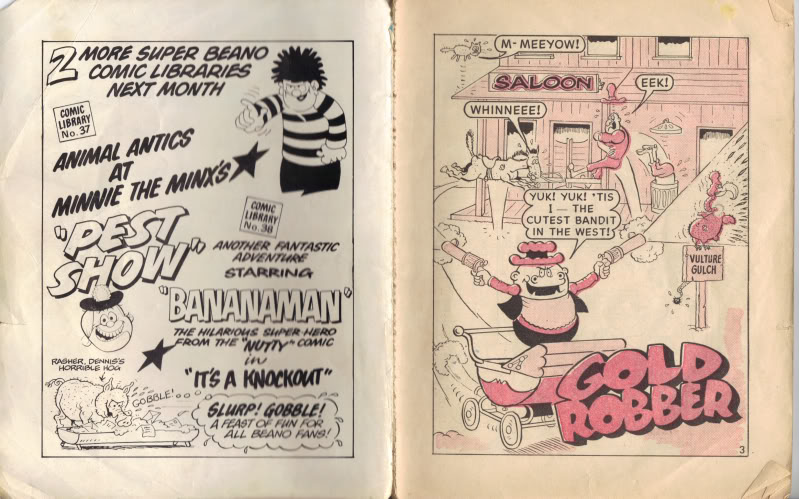 And this on the inside back: 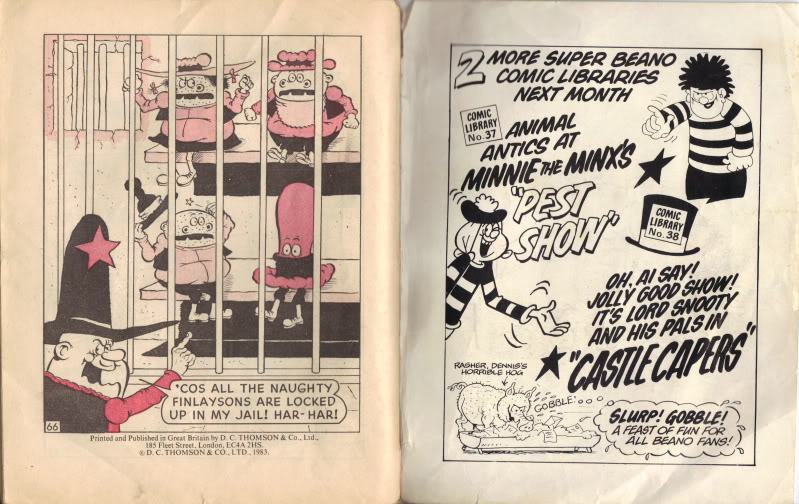 This is weird. No 'See Baby-Face Finlayson every week in the Beano!' and two 'next month' ads, promising different stories next month! The inside front cover is the correct one, except that the Bananaman story was actually called "It's A Knockabout" (and it was BRILLIANT, by the way, one of the best Comic Libraries ever, up there with the Baby-Faces), while "Castle Capers" didn't see print until the following year, in Comic Library no. 50 (it wasn't all that good, either). And the picture of Minnie the Minx on the inside back cover ad is by the artist who normally drew the Minnie Comic Libraries (I think it's lifted from "Min's Best Friend", but I haven't checked), while the picture on the inside front cover is by the different artist (I wish I knew their names, but the Beano never credited its creative talent in those days) who drew "Min's Pest Show".

Apparently they created the original ad, then rescheduled "Castle Capers" and drew up a replacement ad, but accidentally printed it on the inside front cover instead of the back, meaning that two contradictory ads went into the finished publication! I like finding things like this in my comics. I do wonder why the Lord Snooty story was held back for a whole year, too.

Anyway, since I had the scanner up and running again, let me show you why Ron Spencer's Baby-Face Finlayson Comic Libraries were the absolute high point of 1980s comics throughout the universe with just a couple of examples from "Gold Robber":

Baby-Face and friends have just stolen a shipment of butter, mistaking it for gold, but decide to make the best of it by having a feast. Ron Spencer loved his feast scenes. 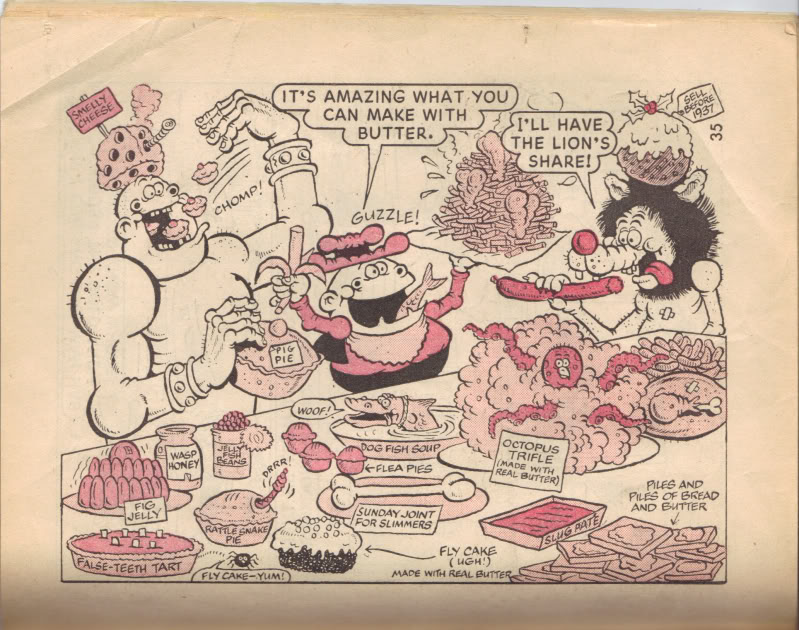 
It's the little things I love - Mayor Orless naturally has a framed picture of himself hanging on his wall. 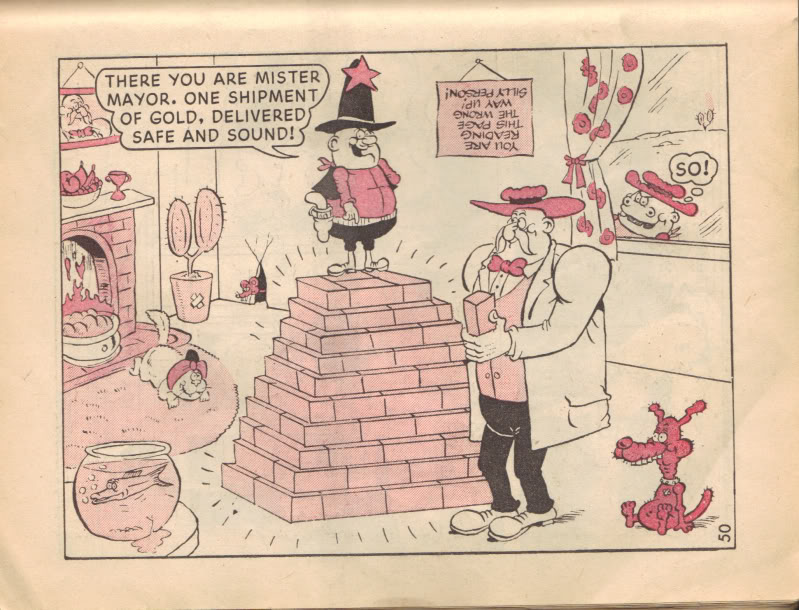 And the complete non-sequitur of one of "Marsh" Mallow's horses thinking "Funny! I keep thinking it's Wednesday!" totally cracks me up. 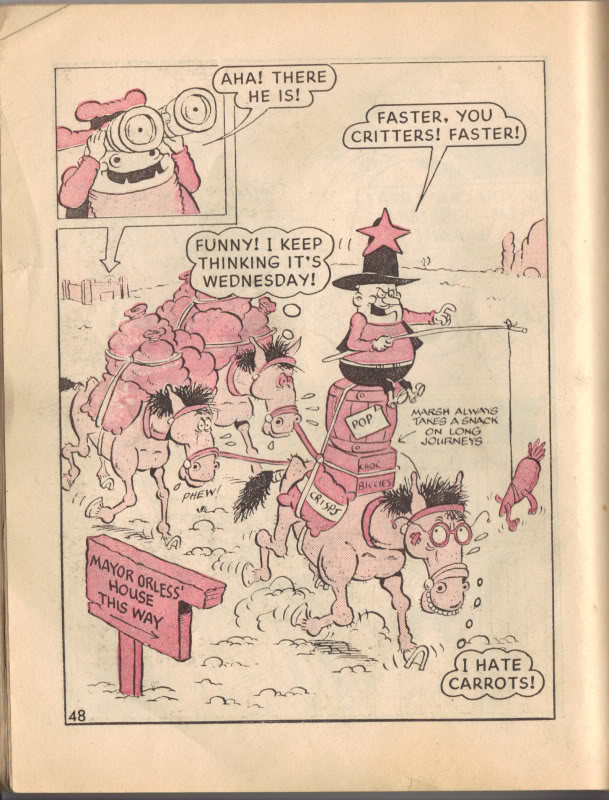 The charity shops around here seem to be full of great stuff all of a sudden. Just today, I found the Dennis the Menace book from 1960, a Beano Comic Library from 1983 starring Baby-Face Finlayson (full of quite brilliantly insane art by Ron Spencer, who I admire greatly but whose name for some reason I always have to look up before I mention him, because I always think he was called either Victor or Sid - I have no idea why), the second volume of Bang Bang It's Reeves And Mortimer on video, and a complete VHS collection of Buffy the Vampire Slayer. And also a new pair of work trousers to replace my ones with the broken zip. Oh, and a Golden Picture Classics abridged edition of Treasure Island from 1956, to provide a belated illustration of the mystery pirate from my essay the other week. And all without any really significant cost to me, while still benefitting various more or less good causes! I don't know why anyone bothers to go into normal shops, I really don't. 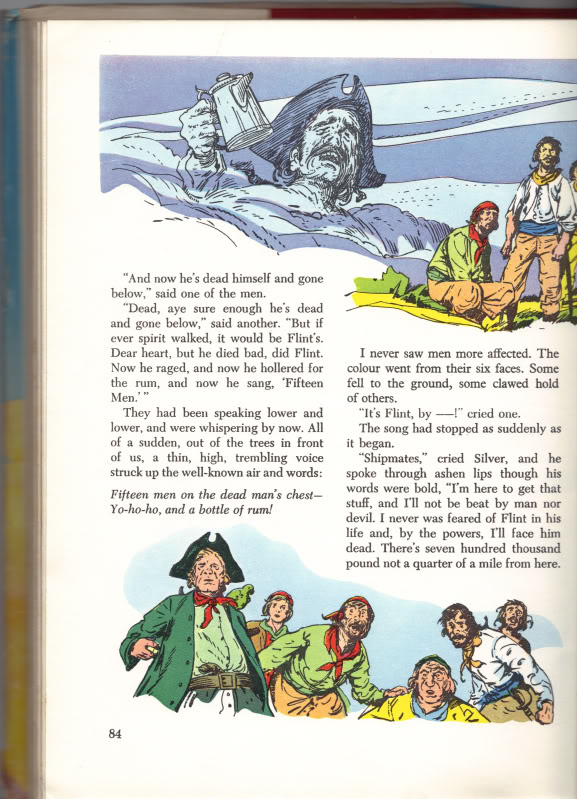 It's probably the one in the green shirt.
Posted by Zoomy at 8:28 pm No comments:

I'm sorry my blogging has been a bit sporadic just lately, but very little of interest has been happening around here. I did some really clever Visual Basic programming at work the other day, but I imagine my blog readers would be even less interested in that than my co-workers, so I won't go into detail.

I've been playing the classic Master System game "Teddy Boy" tonight, a fun platform game with a cute central character who shoots downright adorable monsters and collects beer and cigarettes, among other bonus items. It's a strange game, but very addictive.

Look, the blog will get more interesting than this soon. It's the first othello tournament of the season next weekend, that'll be something worth writing about!
Posted by Zoomy at 10:01 pm No comments:

I'll tell you what I'm tired of

Winter, that's what. When's it going to stop being all cold and nasty? If you're thinking that I haven't blogged enough just lately, it's because of the weather. If you want me to write more than this, get out there and stop it being winter.
Posted by Zoomy at 8:11 pm No comments:

There's an advert on telly, for tellies or something, with a sort of winter-olympics theme. I've never really paid much attention to it, because the first three notes of the jingle are the first three notes of "Walk of Life" by Dire Straits, and so every time that advert comes on, I think 'Hey, I should find "Walk of Life" on YouTube and listen to it.'

I've listened to that song so much in the last couple of weeks, I'm in danger of starting to dislike it. Not serious danger, though. It's an awesome song.
Posted by Zoomy at 8:29 pm 1 comment:

There's no denying it

I'm just not in the mood to memorise. I feel like I need some kind of new challenge. Basically, I feel exactly like I did five years ago - I'm world champion, I've been in the same job for a year and a half after a lengthy period as a drifter, I'm not really on board with the idea of putting in the effort to do the exact same things over again - with the added advantage now of feeling like my life is going around in five-year circles.

I don't know, maybe this would be a good time to drop the whole memory-competition scene (as a competitor, anyway - I couldn't stop going to competitions and hanging out with the people there) and find a new way to impress people with my cleverness. I just need to work out what that would be...
Posted by Zoomy at 8:20 pm 4 comments: