The need for speed

It turns out I'm in the middle of an epic battle for second place, after the first day's excitement. Andrea is, not unexpectedly, far and away ahead of everyone else, after some mind-blowing scores (ten packs and thirty cards of an eleventh in ten minutes!), but there are six of us fighting for the other places on the podium... 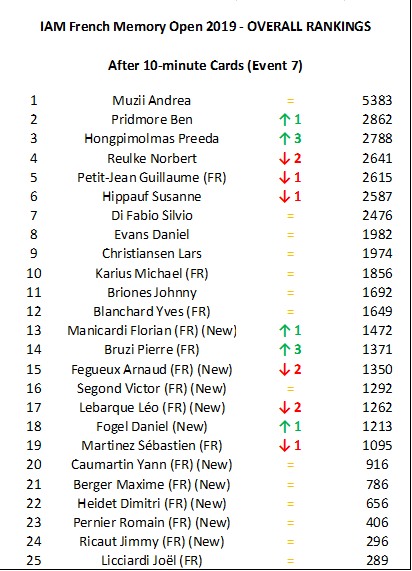 And with spoken numbers, images and speed cards tomorrow, it really looks like I'll have to get a good time in the cards to secure second place. I've been decidedly hit and miss with speed cards in competitions lately, but maybe this would be a good time to improve that personal best? It's been 24.97 seconds for ten years now. I've very literally stood still while everybody else surged ahead!
Posted by Zoomy at 8:57 pm 1 comment:

It's the first morning of the French Open, and it's a high-tech competition using computers, so I can say hello to my long-neglected bloglings in this pause after the first discipline (we're running late due to technical problems, so it's definitely an official memory championship). We've got a room full of memorisers from around the world - I'm wearing my XMT 2015 shirt, and Johnny Briones is coordinating nicely in his 2016 equivalent. Norbert Reulke, another original XMT veteran, sadly isn't wearing his shirt, but everybody who was and wasn't there is firmly in agreement that we need another big World Memory League Championship.

We've also got Preeda, Lars, Susanne, Andrea, Silvio and Dan from places as exotic as Thailand, Denmark/Germany, Italy and Wales, lots and lots of French people (remember when there were nearly no French memorisers at all? Not any more!), Boris and Francoise running the show admirably, Guillaume expertly sorting out the aforementioned technical problems and even wearing a beret to make the event extra-French, Dimitri Heidet has an awesome Salvador Dali moustache, and everybody has their names in big letters on their desk, so I don't have to pretend I know who they are!

Okay, long numbers is about to start. Stay tuned!
Posted by Zoomy at 9:27 am No comments:

Back in the swing

I really haven't posted enough on this blog, lately. I'm going to have to fix that - I never did do a full write-up of the MSO championship in London in August, nor my holiday in the Azores in September, and I haven't at all mentioned that now it's October and I'm in France for the French Open Memory Championship.

Well, I'm in France right now. It's the French Open Memory Championship at the weekend, and I'm feeling entirely happy about things. Not my chances of winning the competition, because I've done literally no training for longer than even I can remember, but I'm downright delighted with my ability to find my way around places today! After an early start this morning to get the plane from Birmingham, I arrived in Paris early on, found the airport train station was temporarily closed, got a bus from the airport into the city centre, successfully found a comic shop that sells this week's American comics (allowing me to buy Powers of X #6 before anyone spoiled it for me, although as it turns out there's nothing really spoilerable in it anyway), then got on a train pointed in the direction of Cergy and got off at the first stop to see if it looked like the kind of place where my hotel and the competition venue might be. And it was - the hotel's practically right next door to that station, and it was only on a last minute whim that I got off at the first Cergy station rather than the middle one of the three!

And in the kind of situation that always makes me nostalgic for the days when I went to memory competitions more regularly, I was greeted by someone in the hotel reception whose face looked familiar, said it was great to see him again, acted like I was in a great hurry to get to my room and said I'd see him a little later, looked through old photos on Facebook until I was fairly sure who I'd been talking to, and now can confidently go to the "Optional Pre-Registration / Enregistrement facultatif" at the nearby competition venue in a couple of hours, nonchalently say "Hi again, Preeda", and then all the other strangers in the room will believe that since I know one person's name, I know all their names too, and all kinds of social awkwardness will be avoided.

Unless they read my blog, of course, but I don't imagine anyone still does that. After all, I never post here any more.
Posted by Zoomy at 1:45 pm 2 comments: