You've probably heard me mention it once or twice before, but the place to be right now (if you're at all interesting in competitive memorising) is the Memory League.

It's a place for fast-paced head-to-head memory contests where the aim is to remember cards, names, numbers, images or words faster and more accurately than your opponent. The super-cool thing about it is that you can watch what's happening in people's games live, as they flick from one thing to another in the memory time, and fill in the gaps in the recall. And chat live with other watchers and players too! Seriously, there's no cooler memory thing in the world at the moment.

There is also, naturally, a league championship. It's divided into divisions, with the usual promotion/relegation from one season to another, so whatever your level, you get regular matches against people of the same kind of ability. Each player chooses their three favourite disciplines, and have a six-discipline match (with the option of playing a seventh if it finishes 3-3 and both players can agree on a final decider discipline). It's great fun for everyone! Let's have a look at how division 2 is shaping up lately: 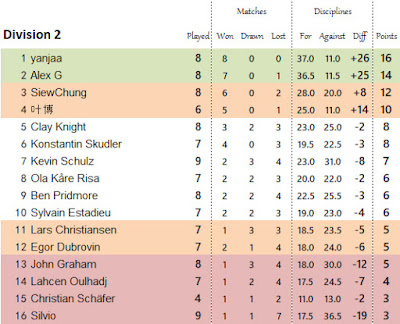 After some wrangling and debate before the start of the season, it was agreed that you can't go straight into division 1 if you didn't play in the season before, even if you're among the best players in the world. So we had four new people who are amazingly good joining division 2 from the four corners of the world (if you arrange the map in a really weird way so that the four corners are all in Asia or eastern Europe), and they're dominating things right now. The top two get automatically promoted, the next two play off against division 1 players, and it's anyone's guess which of Yanjaa, Alex, SC and YeBo will make it into the top two.

Below them, there's a right old ding-dong among the remaining twelve of us - there have been some epic matches! I'm playing Clay tomorrow, and really want to get a win, to pull me away from the relegation battle. Come along and watch, 4pm GMT!
Posted by Zoomy at 7:17 pm No comments: