Keep on running, keep on hiding

At the risk of sounding like a stuck record (by the Spencer Davis Group), I really really love the new Runaways comic from Marvel, and I urge you all to go out and start buying it, if you didn't do that a couple of months ago when I told you to. Long-time readers of my blog (or else readers who know how to read my old posts or type things in the Search box) will remember that eleven years ago I was always saying how great I thought Runaways was and how terrible it was that the Brian K Vaughan / Adrian Alphona era was coming to an end. Well, now under Rainbow Rowell and Kris Anka, it's essentially back! And better than ever!

Seriously, it's as if the glory days of Runaways are here again - not achieved by resetting the whole thing and ignoring everything that's happened to the characters since 2007, but by showing that their many experiences (some of them really badly written and not recommended at all) have changed them, and building on the whole thing in perfectly in-character and fascinating and entertaining ways. They've grown and developed (and died and come back to life a few times each, as is the way with superheroes) and now they're moving on in exactly the way they should. I love it.
Posted by Zoomy at 6:24 pm No comments:

Played by the dexterous, understood by the poindexters

I play Fantasy Premier League, in a not very serious kind of way - I'm not even in a league or anything, so I'm basically just competing against myself. But they do a thing every year called the Cup, in which random players are paired off against each other in a knockout competition over the last 22 weeks of the season, and I'm on a real cup run this year.

Through an unprecedented series of pairings against people who just picked a team at the start of the season and forgot about it, my heroic and well-thought-out squad selections have got to round five (the last 262,144!), so I'm starting to dream of holding aloft the imaginary trophy at the end of the season. Trouble is, this time I'm up against somebody who still is actively participating too, so it's going to be tricky. 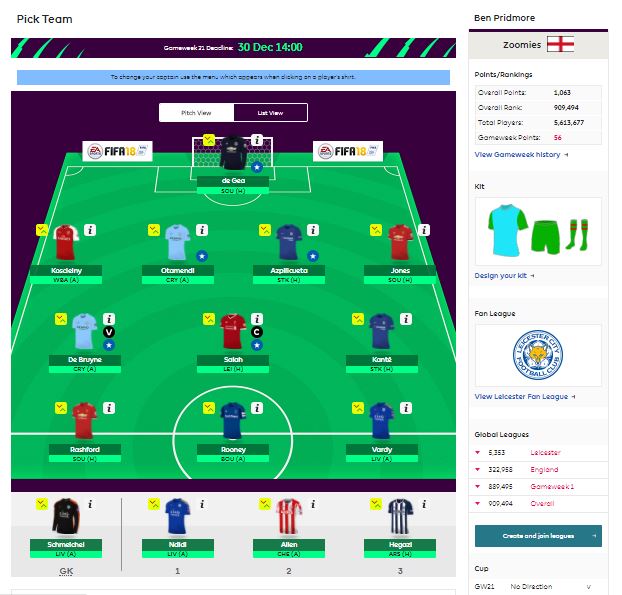 What do you think? Should I go for some less obvious choices? I feel like I'm being too boring here. I should pick someone who's never played in their life, but is just waiting for the moment when the rest of the team drop dead unexpectedly to come into the squad and take the world by storm. And should I ditch Wayne Rooney? He's only going to call in sick again so he can enjoy his new year holiday...


Incidentally, if you do want to post a comment here, you'll have to have a registered account now. Sorry, but it seems that the robots of the world have learned how to tick the box and say they're a human without exploding from the contradiction. Darn those robots, they're getting too clever.
Posted by Zoomy at 7:15 pm No comments: