Is the world truly ending?

In the latest random-number selection from my comic collection, thanks to an unimaginative anonymouse who wanted to see what came first on my list, I give you 1602, part one, from November 2003. 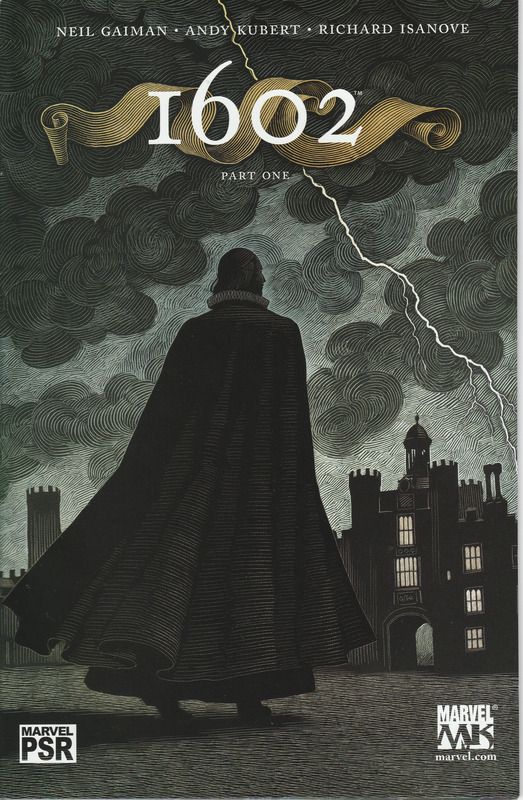 Written by the famous author Neil Gaiman, this was a high-prestige project for Marvel, part of their policy (new at the time) of moving away from just telling stories set in the boring old Marvel universe, and branching out into new interpretations of their characters. In 1996, they "killed off" all the cool characters and relaunched them as Heroes Reborn, telling the old stories but in cooler 1990s ways. It was rubbish, and abandoned after a year, but it paved the way for "Ultimate" versions of the heroes a couple of years later, this time running alongside the old-style comics. 1602, on the other hand, isn't an attempt to launch a new universe, it's basically just letting Neil Gaiman play with the characters by writing them in a story set in 1602.

Unlike the previous two comics I reviewed, this one came out when the internet was up and running, and so it got a lot of attention from fans, wondering what was going on - not helped by Marvel first claiming that the series would be connected in some way to the mainstream universe, and then backtracking and saying that no, it wouldn't, really, sort of. But no comic is improved by knowing what internet fans said about it, so let's just ignore that whole side of things. It was fun at the time, though!

Art is by the big-name comic artist Andy Kubert, and 'digitally painted' by Richard Isanove, although the cover is drawn by Scott McKowen. Todd Klein does the lettering, and this is probably the peak of Marvel's too-many-cooks editorial policy - Joe Quesada is editor, Nick Lowe is assistant editor, Nanci Dakesian is managing editor, Kelly Lamy is assistant managing editor, Joe Quesada (again) is editor in chief and Bill Jemas is president. It's a wonder there was room for any comic after all those credits.


There really isn't much story in this issue. Some sort of plot does develop in the course of the eight-issue series, but this opening one is really just about introducing the characters. None of it makes any sense to readers who aren't familiar with the classic Marvel superheroes (the cast is strictly limited to characters from the 1960s), and if you are, the appeal basically lies in saying 'oh, that's a clever take on what such-and-such-a-character's 1602 counterpart would be'. Over and over again. Despite this, though, the whole thing is a fun read, and I do recommend it!

The art is quite epic, very nicely coloured to suggest candlelight, sunrise, sunset, night and so on (not a single scene in this one takes place in broad daylight), although some of the character posing is stiff and unnatural, and the facial expressions are a bit strange - people always seem to have their eyes half closed.


We open our story in Hampton Court, England, in 1602. Continuing straight on from the cover, we see that our cloaked figure is Doctor Stephen Strange (as in, Dr Strange, master of the mystic arts). He wears an Elizabethan ruff and a beard, rather than his classic moustache, and enters a room to meet Queen Elizabeth herself, and Sir Nicholas Fury (Nick Fury, agent of SHIELD). He's got a beard too, of course, as well as his traditional eyepatch. Elizabeth has her face plastered in white makeup, and coughs into a bloodstained handkerchief throughout the conversation, in a historically-accurate way.

She introduces the two men to each other, and they discuss whether the recent earthquakes, red skies and so on are signs of the apocalypse. Dr Strange isn't prepared to go that far ("No man shall know the day or the hour, eh?") but explains that he needs Sir Nicholas's help to convey something powerful from the Holy Land to England. He agrees, and the two of them go their separate ways.

Meanwhile, in Domdaniel, Spain, a young man with wings is chained up in the Inquisition's dungeon. His name doesn't seem to be mentioned in this comic, but it's clearly the Angel, of the X-Men. He laments his fate.

In Westminster, young Peter Parquagh (guess who?) studies a spider while a blind Irish singer called Matthew (that'll be Daredevil) entertains the customers of a tavern with the ballad of the Four from the Fantastick. Peter works for Sir Nicholas, while Matthew secretly has acrobatic powers, can see in the dark, and works as Sir Nicholas's informant, agreeing to help bring the mysterious treasure safely to England.

Dr Strange, meanwhile, goes back to his house in the village of Greenwich (see what we did there? He lives in Greenwich Village, New York, in the classic comics) where his beloved Clea speculates with him about the possibility of James of Scotland becoming King of England when Elizabeth dies, and then helps him gaze into a magic mirror to see visions of what is to come. It's not very enlightening - a red-garbed nun in the court of the Inquisition perceives his astral form and dismisses him.

She's Sister Wanda (the Scarlet Witch), and she and Petros (Quicksilver) serve the Inquisitor (who doesn't look anything like Magneto, but doesn't really need to, because who else could it be?) and discuss their planned alliance with King James to make common cause against the witchbreed (as in, mutants like the X-Men and themselves). It's all part of a typical plan to rise to power, convincing the English that the witchbreed plan to blow up the Houses of Parliament. The Inquisitor's enemy, Javier, will be powerless to stop him!

On board the Virginia Maid, in the middle of the Atlantic, is a young girl accompanied by a monosyllabic blond-haired native American called Rojhaz (Captain America), and she's worried what might happen if she 'changes' again... She's not actually a Marvel character, and caused much confusion among readers at the time. She's a real-life person, Virginia Dare, who's the subject of a legend that Neil Gaiman thought was common knowledge and was rather surprised to find out that nobody else had heard of it.

Sir Nicholas and Peter discuss the Templar treasure and fight off an assassin, while Matthew goes to his friend Captain Nelson's ship (hey, look, it's Daredevil's fat friend Foggy Nelson!) before dawn breaks in Spain and it's time to burn the Angel at the stake. But he's saved by two more witchbreed heroes! 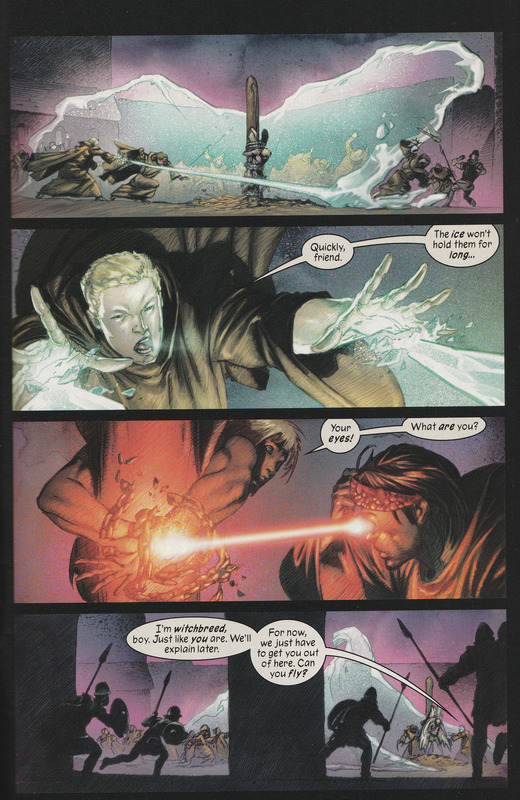 They identify themselves as Scotius Summerisle (Scott Summers, Cyclops) and Robert Trefusis (Bobby Drake, Iceman - and why he doesn't get to keep the surname Drake, which was a famous name in 1602 England, I don't know). Meanwhile, Queen Elizabeth has a dream of the Old Man (the Ancient One, Dr Strange's mentor) beginning on his journey from Jerusalem with the artifact. Then the witchbreed go back to their ship and introduce the Angel to John Grey (as in Jean Grey, Marvel Girl, doing the classic Shakespearean thing and disguising herself as a boy), before setting sail to their schoolhouse. And that's the rather anticlimactic end.

Like I say, it's a fun enough story, but the appeal is pretty much entirely in the novelty value of seeing the classic Marvel characters in new forms. The rest of the series is more entertaining in its own right, so I'd recommend that you check out the collected edition!


Despite being part of the Marvel Knights 'hardcore comics' kind of imprint, and having "Marvel PSR" (which probably stood for parental supervision recommended, although Marvel had only just introduced these ratings at the time and didn't go out of their way to tell anyone what they meant) on the cover, the moody Elizabethan artwork of this one is interspersed with a full complement of 'teen' adverts. Most notably, we get the high-point of the Lorillard Tobacco Company's legally-mandated youth smoking prevention policy, which consisted of running ads in comics using the slogan "Tobacco is whacko! (if you're a teen)" Once you turn twenty, of course, tobacco is great. But it's kind of hard to see how this particularly strange picture is trying to convey the idea that smoking is a bad thing, isn't it? Especially if you read British comics of the 1950s and are used to 'whacko' meaning 'really jolly good'. Perhaps it's just meant to give teens nightmares about cigarettes with scary faces on them.


If you'd like to see another random comic review, give me a number between 3 and 3333, and I'll pull the appropriate comic from the pile!
Posted by Zoomy at 6:49 pm 6 comments:

I want Chromobots in my Beano!

A great benefit of the Beano's new policy of crediting its writers and artists is the unexpected pleasure of seeing that this week's fill-in artist for the Bash Street Kids is Mychailo Kazybrid!

... You know, Mike Kazybrid! The one who drew back-up strips for the Transformers comics for a little while in the mid-1980s! Well, maybe you have to be my generation to get it, but if you were eight years old when the Transformers first came along, you'll have been as enraptured as me with the two-page black-and-white filler strip "Chromobots" with its thrilling robot adventures, every fortnight until the comic went weekly and changed its format in 1985. It was great, it really was. He also drew the longer-running half-page comedy strip Matt and the Cat, but I never liked that one. Still, it's great to see him still around - or if not him (because you can't really tell from the Bash Street Kids art if it's the same person, since he has to copy the David Sutherland style, and someone else wrote the script so you can't see if it's got his old style of writing to it either) then somebody else with the same unusual name. And there can't be all that many artists called Mychailo Kazybrid, so let's assume it is. I'd love to see more Chromobots!
Posted by Zoomy at 7:31 pm 2 comments: