I might have mentioned before that I own an electric piano keyboard thing that I use for the sole purpose of propping my bedroom window open. Well, yesterday, the inevitable happened and I accidentally dropped it out of the window into my downstairs neighbours' yard. Big bang. I did go down and knock on their door to apologise and ask for my keyboard back please, but there was no answer. Looking out the window a little later, I noticed the keyboard had gone, though. I don't know the new people in flat two, they only just moved in recently, and I suspect they think they're living below a temperamental rock musician who occasionally throws his instruments through the window in a fit of booze-addled creative insanity. I'm now hoping to bump into them in the hallway and assume the keyboard incident will come up in the conversation in a way that we can all laugh about it.

Meanwhile, this morning, I was in WH Smith's, and an unfamiliar voice hailed me across the store with "Memory man!" Ah, a fan, I thought to myself. And an unusually loud one, too. No, wait, I know this guy. Who is he? He's coming over. "Hi, Ben, how are you?" Ah, that's who he is. "Hi there... Angus."

"No, try again." Dang. Why did I think he was Angus Walker, former World Intelligence Champion whom I haven't seen for eight years? I've barely thought about him in the intervening time, either, so why did he pop into my head if this person isn't him? "Three more guesses," said the mystery man, clearly enjoying experiencing my famous inability to remember people's names. I flailed around for a minute or two, apologising for having not the faintest idea who he was. "Think numbers," he hinted.

"Ah! Robert! Yes, I knew it all along," I said, unconvincingly. Of course it is. Robert Fountain, Mental Calculation World Cup winner, whom I haven't seen for a mere two years. He does look quite a bit like Angus Walker, you know. And I'm sure I would have recognised his voice, only he'd just been to the dentist. He's just moved in to the neighbourhood, so I'll have to make a point of remembering who he is in future.

Anyway, this afternoon I decided to roll up my metaphorical sleeves and get stuck in to a real memory training session. Half-hour numbers, half-hour cards and half-hour binary, crammed into a six-hour time period, exactly like in the German championship. I did the numbers and cards, but had to give up on the binary after ten minutes, conscious that absolutely nothing was sinking in to my brain. Despite my reputation for working harder than any sane person would at memory training, I just haven't been up to world championship winning standard in my preparation regime for a very, very long time. I really need to work on my stamina. Or maybe schedule my training sessions for a time when I don't know Doctor Who is on the telly.

No problem with the memory in the numbers or cards, though - marked them during the first half of the football, and I got 1340 digits and 17½ packs, which would be two new world records if I did it in Tuttlingen. Would've been nice to get a binary score of some kind to go with them, but we're still a month away. If I'm serious about training, that three-world-records plan of mine might just be possible.
Posted by Zoomy at 9:12 pm 1 comment:

Well, if yesterday's blog was number 999, I suppose that means that this is the big one thousand! Woo!

So, I've been racking my brains, wondering what kind of post I should make for this historic occasion. Some kind of song and dance routine? An analysis of my life over the last thousand blogged days? A shocking personal revelation? A blank blog to really subvert expectations?

No, what I should really do is stop talking about myself for once, and say "But enough about me. How's things with you?" What's happening with you, my blog readers, today? I'd really like to see in the comments thread a paragraph or two of what you would be blogging about tonight if you were a blogger. And if you already are a blogger, well, write something else.
Posted by Zoomy at 7:45 pm 5 comments:

This note has been added as an afterthought, realising that a large proportion of my blog readers are American, German or Other. 999 is the phone number for the emergency services. Just substitute it in your mind for 911 or 112 or whatever outlandish number you prefer to use whenever you encounter "999" in the following blog. Thank you for reading.

This is, apparently, blog post number 999 in Zoomy's Thing. Wowee!

Actually, the only thing this inspires me to write about is a question I occasionally get asked about the "Ben System". Doesn't it make more sense, people say, to have, for example, 999 be a policeman, because that's the first thing that comes to mind when you see the number 999, and not Mr Burns's teddy Bobo, or whatever image you might create with the Ben System.

Actually, people who say that are invariably people who currently use the Dominic System, which recommends this kind of thing. People who started off by reading Tony Buzan's books, like me, have never encountered the idea. So that's probably why I always reply "No, that's not the way you should do it. Make a Ben-system or Major-system or Dominic-system image for each number/card/whatever, don't break the rules. Easier to learn them then, believe me."

However, this response of mine is, I think, a worthy one. When you're learning a lot of images, especially if you're trying your hand at a 1000-image system, it takes time to drill them into your head. And the way to think about the "Ben System" is not as a way of converting numbers into words and pictures, but as a way of learning to read a different alphabet. You want to get to a point where you're looking at the piece of paper and not seeing numbers at all, but automatically seeing the appropriate image. And you will get to that point more quickly if during the learning phase you're thinking "that's buh-oh-buh... Bobo!" instead of "that's 999... policeman!" Really, you will. So pick a system and use it for EVERYTHING. No exceptions. Your brain will thank you for it.

Probably. I mean, Dominic hasn't exactly been a failure at the whole memory thing...
Posted by Zoomy at 10:04 pm 3 comments:

You'd think, with being unemployed and penniless and everything, that I'd be losing weight, but in fact I'm pretty sure I'm doing the reverse just lately. Looking at some of the pictures from the party on Saturday, I have to admit I look decidedly blubbery. I'm giving that weighing machine in Woolworth's a wide berth. I need a job that involves a good long cycle ride or walk every day. Or in a liposuction clinic that gives free sucks to its accountants.
Posted by Zoomy at 9:32 pm 1 comment:

The boxes of sweets/chocolates/jaffa cakes etc on the shelves lining the queue for the tills in Woolworth's have got big, visible yellow stickers on them saying "IMPULSE LINE - PRE-TILLS" or something along those lines. As a customer, I find it quite offensive that they're owning up to strategically placing goodies in the eyeline of people waiting to pay for the things they came into the shop for! What happened to the long-standing tradition of pretending it's all just a coincidence? The decent, honourable thing to do is to be sneaky and underhanded and insult your customers' intelligence.
Posted by Zoomy at 9:26 pm No comments:

Warning: Not for the faint-hearted

Well, you see, it was my brother's thirtieth birthday and he really wanted lots of cool costumes at his party, so I had to make an effort to do something unexpected. So this is what I looked like: 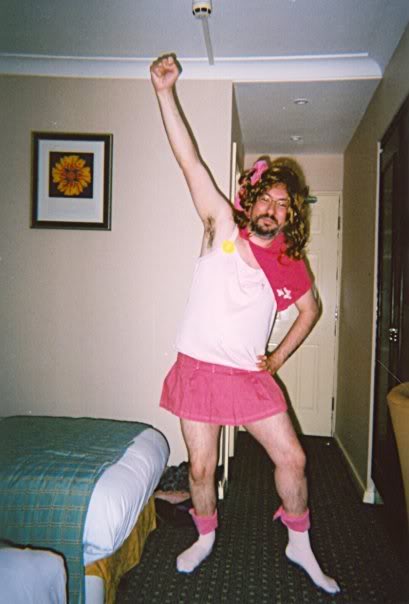 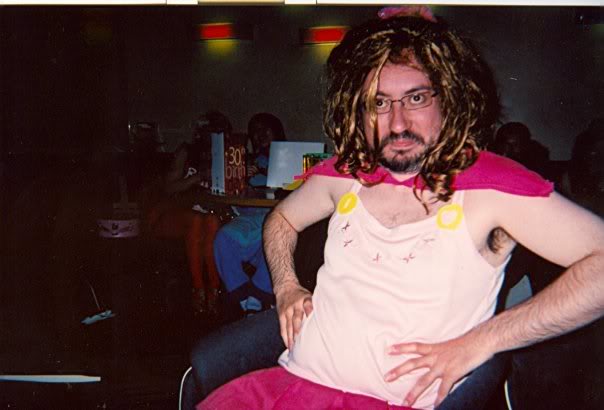 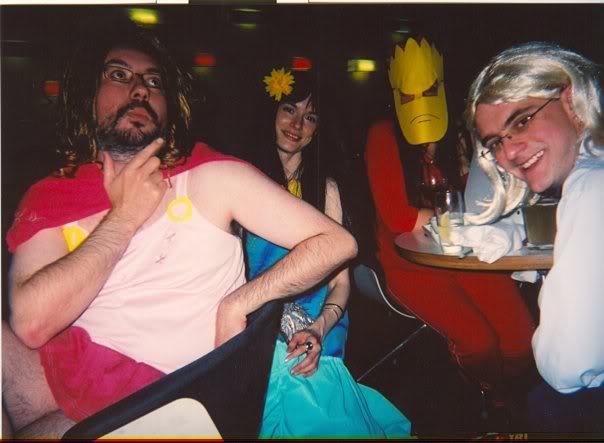 On the right of that one you can see my regular blog-commenter Ian, who had a magnificent costume himself: 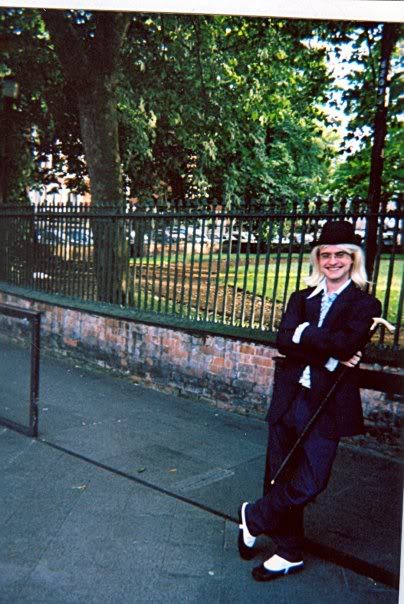 Whereas my brother himself was a destructo-robot with a slightly alarming tight-fitting leotard: 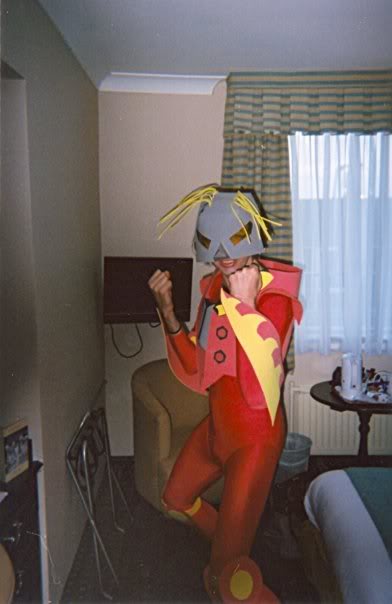 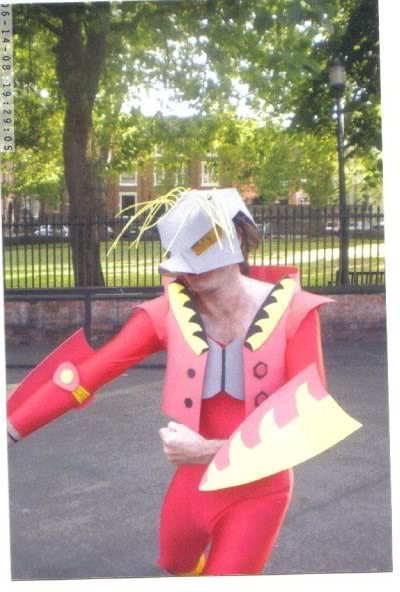 And all in all, the evening had a lot of this kind of thing going on: 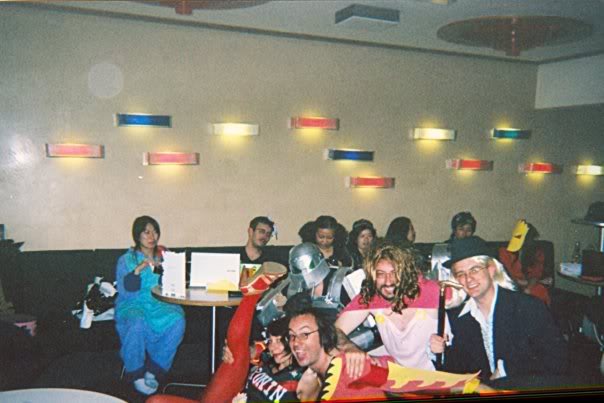 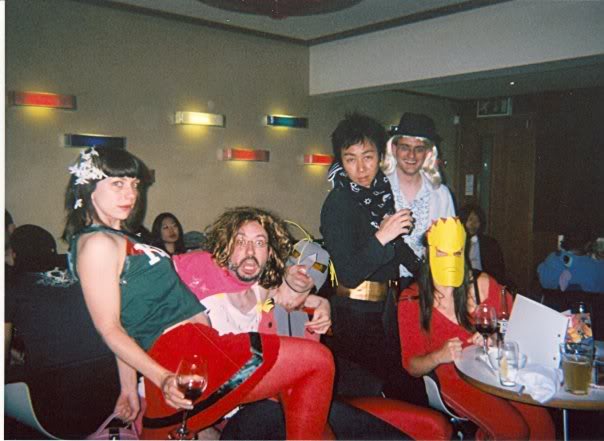 So yes, don't say I didn't warn you, and I probably won't be wearing another miniskirt for quite some time, probably. I did look good, though. Maybe the costume will find its way into my regular rotation...
Posted by Zoomy at 9:22 pm 8 comments:

Well, that was a fantastic party! I'm still suffering a little from over-drinking and under-sleeping last night, so I'll be brief, but photos will follow soon, hopefully, of me in my costume. It looked a bit like this: 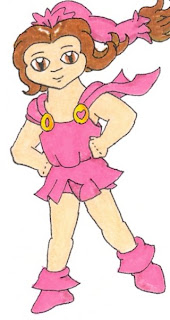