I'm reliably informed that Current TV called me the number one geek-we-all-love last night, and played my 'pod' (which is what they call programmes on Current TV, because Current TV is 'cool' and 'down with the kids') from several years ago. You can watch it here if you haven't seen it before. Disturbingly, I had a lot less white in my beard back then, and it was only, what, three years ago?

The really entertaining bit about that page is the comment-threads. Because Current TV is all about viewer-created content (or, as they call it, 'VC-squared', which to my obviously uncool ears sounds just about the squarest phrase it's possible to make up), everybody who commented did so with some bland 'hey, this is a good pod' thing (although at least they all made some specific reference to the content, to prove they're not just spambots) and followed it up with 'please check out my pod at the following link...'.

This is still quite flattering, because obviously they think that this 'pod', and its creator (who's almost a real TV person, not a member of the public) are among the coolest things on Current TV, and they can achieve fame by attracting its many viewers to come and see their own efforts.

In all seriousness, though, it's completely and totally groovy to be adulated as the coolest geek of them all. As I said in an uncharacteristically snappy soundbite in a newspaper interview at the WMC, "I'm absolutely a nerd, and I'm very proud of it. I'm the nerd who all the other nerds look up to and want to be like, and that's a wonderful thing to be." If that's how I'm remembered by history, I'll be delighted!

Also, Happy Christmas, everyone!
Posted by Zoomy at 8:02 pm No comments:

There was an article on the BBC News today announcing the sad news that Arnold Stang, the voice of Top Cat, has died, aged 91. It's a good innings - I'd sort of assumed he'd died years ago, to be honest. Anyway, fanatical cartoon fan though I am, he's not an actor who figures very prominently in my consciousness - Top Cat used 'real' actors, not cartoon voice specialists, and none of them really saw the job as anything other than a one-off, fun little thing they did in between films and TV shows. With one exception... 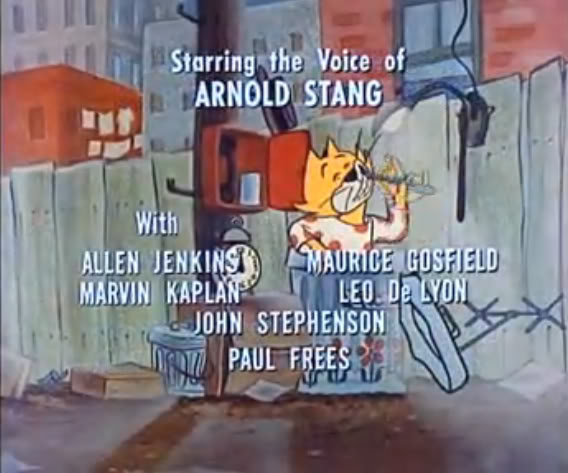 John Stephenson, playing Fancy (the orangey-brown one with the white scarf, who has one line per episode if he's lucky), was a 'real' actor too, until he was given that minor voice part in 1961, on the grounds that he could do a good Clark Gable impression. But from then on, he became a regular name that would pop up in the credits of EVERY cartoon series you might happen to watch. Always in minor roles who didn't say much - Mr Slate in The Flintstones, Luke in Wacky Races, Thundercracker in Transformers, Beef in Galaxy High... wherever Frank Welker was voicing six or seven lead characters, there'd be John Stephenson in the background, chipping in a "Yes, Boss!" every now and then. He's a hero to fans of minor cartoon characters everywhere, and he's still voicing them even today, every now and then, though he's in his late eighties now.

I'm hoping that he gets a big write-up in the media as and when he eventually passes away. Anyone who gives fifty years' service to an industry that makes millions of people happy deserves recognition!
Posted by Zoomy at 9:25 pm 3 comments:

I HATE icy pavements! It takes me ten times longer to get from A to B, even if I don't slip over and cripple myself. I'm going to start carrying a flamethrower around with me so I can melt the ice. I'm not sure where you go to buy a flamethrower, but I'm sure they're available on the internet.
Posted by Zoomy at 9:14 pm 2 comments:

I'm getting quite sloppy about blogging every night, just lately. I was very tired yesterday, that's my excuse. And I'm working in the Boots store in Newark for the next couple of days, so I'm probably just going to get tireder. Still, on the plus side, I've now got a monopoly set of my very own! (see my post on the subject a few weeks ago if you wonder why that would be a good thing) It really is a fun game. And it also seems like the kind of thing it would be good to spend a drunken evening playing with a whole mob of friends. Anyone fancy a drunken monopoly evening?
Posted by Zoomy at 9:13 pm No comments: