I finally got round to getting some new passport photos taken today, and... 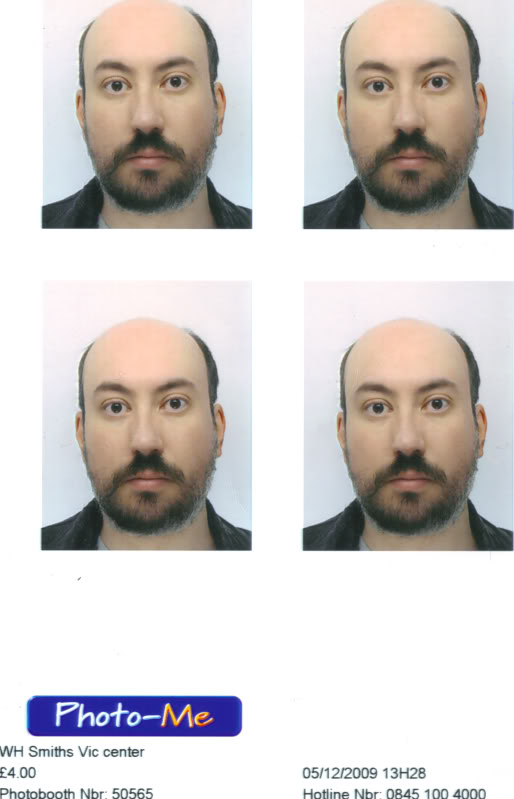 Okay, I'm not used to seeing myself without glasses (you're not allowed to wear them in passport photos nowadays, and you're also not allowed to smile, which makes me look like some kind of psychopath), but this really isn't a good photo. Is it me, or is one of my eyes higher than the other? Or is my head just tilted? I look quite freakish. Never allow me to see myself without glasses again! See, now I've got another reason not to wear contacts!
Posted by Zoomy at 9:37 pm 4 comments:

The history of othello

Othello was invented by James Othello, a Lancashire coal miner and barrister, in 1937. The invention of the game was a happy accident. Othello, who in his spare time was a board game designer, had been working on a game involving an 8x8 board and 64 discs, but it wasn't working out very well as all the discs were white, so it was hard to tell which belonged to which player, and it wasn't possible to move them, because there weren't any free spaces on the board to move them to. Othello, who was also a talented amateur artist who sold watercolours to local and national galleries whenever he had a spare moment, decided to relieve his frustrations by painting a picture of himself throwing a pot of black paint over his unsuccessful board game. However, he accidentally upset his pot of black paint over the game while reaching for the green, and found that it had half covered all of the discs, so that they were black on one side and white on the other. Furthermore, while picking the newly-painted discs up to examine them, he hit upon the idea of a game in which the aim was to put discs down on the board in strategic positions.

Quickly, he ran to his study, put aside the novel he'd been working on in his spare time, and typed out a set of rules to his newly-invented board game, which he decided to call "Othello's Game" (named not after himself but after the Shakespeare character whom James Othello mistakenly believed to be the hero of a play about board games). The book of rules was published the following week and became a best-seller. With the proceeds, James Othello was able to buy a new house in Aldershot for one of his wives and their three children, thus making his bigamous life a great deal easier, as up until this point he had been maintaining two different families in neighbouring houses and lived in fear of his two wives becoming friends and comparing notes about their husbands.

The only problem encountered by the billions of people who bought the book of rules was the unavailability of othello sets to play on - the rules specified that the only "official" set was the one owned by James Othello, and he refused to allow anyone to play on that in case they got dirty fingerprints on it (somewhat germ-phobic, James Othello spent up to six hours a day cleaning his house from top to bottom and back up to top again). It fell to Goro Othello (no relation) to re-invent the game in 1972, removing the rule about the official set and renaming the game "Othello", after his mother, Mrs Othello Othello.

James Othello was somewhat embittered by this, but was never able to prove to the satisfaction of the courts that he had ever invented othello in the first place, as all copies of his book had been lost. He spent the rest of his life, when he wasn't coal-mining, trying to invent a better game, but it kept turning into the exact same game as chess, only with no knights, and everyone hated it.

In tribute to James Othello, everyone nowadays refrains from typing up their transcripts and sending them to Geoff until at least a week after the Cambridge Christmas tournament, in accordance with a strangely specific provision in his last will and testament.
Posted by Zoomy at 9:27 pm 4 comments:

Following in footsteps overgrown with moss

It was our department's Christmas do, at a restaurant with decent food and all the usual trimmings, but with crackers containing not jokes but extremely strange trivia, mostly about dogs, but also such fascinating information as (and I'm not making this up) "Question: How many dwarfs are there? Answer: Seven (7)"
Posted by Zoomy at 10:50 pm No comments:

Sometimes I can't resist the obvious

I'm sorry, I just have to observe that the headline on the front page of the Sun this morning was "I Had Two-Year Fling With Tiger", while the front page of the Mirror went with "My Three-Year Affair With Tiger". Both about the same woman, as far as I can see. Honestly, it's almost enough to shake my faith in the ability of tabloid newspapers to accurately report celebrity gossip.

I would love to know which paper gained the most sales from its headlines. Perhaps the Sun appealed to people who like Tiger Woods more, and who wanted to read the story that suggested he'd cheated on his wife for the shorter period of time, whereas the Mirror sold to the people who prefer Nick Faldo, and want the maximum possible infidelity from his rivals. The BBC News website, I notice, describes it as a 31-month affair. That's the kind of accuracy you get from a classy source like the BBC. It would be even more classy of them to concentrate on reporting the real news, rather than the celebrity adultery, but I suppose we can't have everything.

Ooh, but here's something I've only just learned about the BBC News website - did you know that all of its headlines are between 31 and 33 characters in length? I'm hugely impressed. That's so horribly restrictive, and yet they do it so naturally that I never noticed! It's because, apparently, 33 characters is the maximum that can fit on a line on Ceefax (and, apparently, the BBC website thinks that people still read Ceefax), and because someone somewhere calculated that the minimum possible to convey a good headline without looking abridged is 31 characters.

I mean, this is really brilliant. Look at the headlines right now: "Taliban defiant over Obama surge": 32 characters. "Yacht skipper speaks of 'mistake'": 33 characters. "Woods admits letting family down": 32 characters. There are some really talented writers at the BBC! Tragically, though, the powers that beeb have just heard of the concept of search engine optimisation, so now when you click on the 31-33-character headlines, you go through to the story page and find it's got a longer headline featuring as many keywords as possible. Perhaps soon they'll allow Ceefax to fade into the history books and those headline-compressors will be out of a job. I wonder what they'd do if Jan Vennegoor of Hesselink cheated on his wife? He's got 22 characters just in his surname. 23, because you'd have to leave a space after it.
Posted by Zoomy at 9:13 pm 2 comments:

The Balaclava Story and other stories

You know, it's a shame that balaclavas are out of fashion these days. On a cold winter's morning, that's exactly the kind of thing I need to wear when I'm cycling to work. Maybe I'll buy one and to heck with fashion. Or get someone to knit me one - it will need to be in bright colours and patterns, so people don't think I'm a terrorist.

I do also need to buy a cycle helmet. People keep telling me to, and my only real excuse for not getting one is that I'm too lazy. Maybe I'll kill two birds with one stone and get a sort of super-strong balaclava that protects my head from all possible injury. I do need to keep my superhuman genius brain safe, after all...
Posted by Zoomy at 8:54 pm 6 comments:

"The Book People" periodically come to Boots and set up shop, flogging reasonably-priced but not-very-good books. Today, however, they had a complete set of Beatrix Potters for a very reasonable kind of price, so I snapped it up. Well, if people ask me often enough to buy things, I always give in in the end. So now please excuse the brief blog, I'm off to read about Timmy Tiptoes.
Posted by Zoomy at 8:52 pm 2 comments:

Grandma is knitting woolly jumpers for hens. She mentioned this to me in the course of a conversation about how everyone else in the world thinks she's going barmy, but it turns out that there's a perfectly reasonable explanation for it. So please do go to that website and support this quite genuine need for woolly hen-jumpers.

Seriously, please note that I get the comments anyone makes on any blog post, any time, emailed to me. So you don't have to comment on today's post if you want to make sure I see it. I like to look back through my blog occasionally and see what people replied to particular posts, and it irks me if I find a comment about something else entirely that ignores whatever strange subject I was blogging about.

There, that's the serious business out of the way (hens and victimisation). Everybody have a nice day, and normal niceness will be resumed tomorrow. And hey, it's December on Tuesday!
Posted by Zoomy at 10:06 pm 1 comment: