Okay, so the corpore sano thing is all sorted (I've lost three pounds since I weighed myself on Wednesday, although that weighing was immediately after a big lunch so as to give myself the heaviest possible starting weight), now let's focus on the world of memorising things.

I've slacked off on the training in a big way for the last couple of months. I've also slacked off on the blogging about memory competitions, so here's a brief summary of the little opening salvos of the 2011 memory season - I was basically rubbish at the Welsh championship, while Christian Schäfer won the North German Championship ahead of Johannes Mallow, and Simon Reinhard won the South German [I may have mixed up the two parts of Germany, but I don't think I did] with a really extremely impressive kind of performance. Nowadays you have to consider what the Chinese people are doing, too, but to the best of my knowledge they haven't been doing anything lately.

So if I'm going to have even the slightest outside chance of winning my title back, I should be working hard at it right now. Starting tomorrow, I'll grind my way back into training, and give you all daily updates of how I'm getting along. That way you can all jeer at me, and it'll motivate me to get good again.
Posted by Zoomy at 7:04 pm 1 comment:

A delicious, nutritious shake for breakfast...

I'm on a diet. It's the kind of concept that I'm normally quite scathing about, but on the other hand I can't avoid the fact that I've got gradually heavier over the last couple of years, so in the spirit of 'doing something new', which is my defining philosophy at the moment, I'm doing Tony Ferguson.

That's the name of a diet, which seems to be founded and run by someone called Chris Ferguson, and which they sell at Boots. Just to divulge a bit of confidential information now that I don't work for them any more, it didn't sell as well as the people in charge of setting the budgets expected (I think this is more of a reflection on the budget-setters than on the diet), but someone in our department lost a huge amount of weight very quickly on it, and didn't put weight back on afterwards either, so I thought I'd give it a try. My fridge is full of vegetables. It ain't natural.

It's day two, and I'm not noticeably slenderer (I don't own a set of weighing scales, so I haven't measured my progress), but on the other hand cutting carbohydrates and sugary treats out of my food intake hasn't killed me yet either. If it doesn't kill me by next weekend, I'll weigh myself on the machine in Boots or somewhere, and see how much good it's done. If it works, I'll celebrate with cake and cherry coke.

If only they still sold that miracle soap from the adverts in yesterday's blog entry.
Posted by Zoomy at 6:32 pm No comments:

I'm sorry I've been a non-blogger for so long. You deserve both an apology and a full explanation of what I've been up to for the last couple of weeks, but I'm afraid you're not going to get them. Instead, let's talk about the June 1933 edition of "Happy Mag", which I found in London some time last year and have been meaning to blog about ever since. And the absolutely hilarious 'Just Williams' comic in the latest issue of Viz (in which the Archbishop of Canterbury has an adventure in the style of Richmal Crompton's 'Just William' stories, including a perfect imitation of William's trademark dialogue - it's a must-read, believe me) reminded me of this old ambition, so here we go: 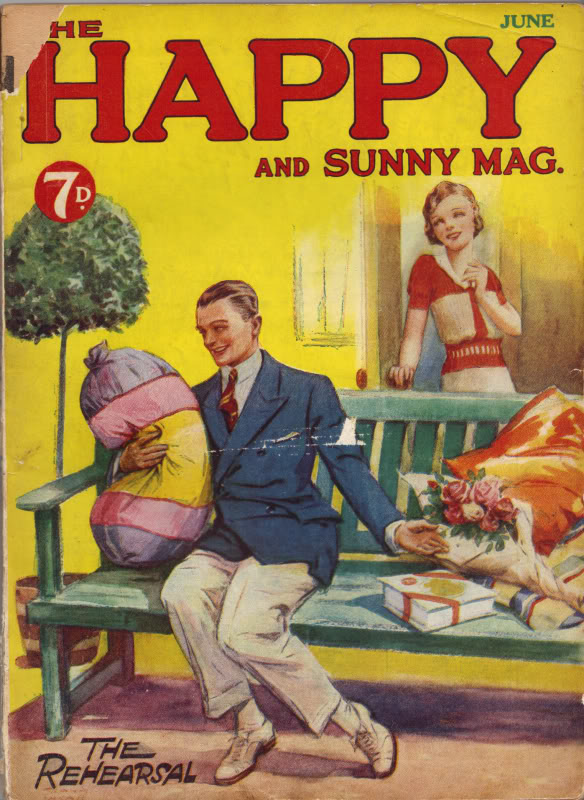 It's actually "Happy and Sunny Mag", having recently absorbed a less-successful sister title, but the cover sets the tone for what's inside - your sevenpence gets you a hundred pages of humorous drawings, jokes and stories, most of them romances. And there are also some fascinating adverts featuring the latest products and services that the buying public of 1933 really need. 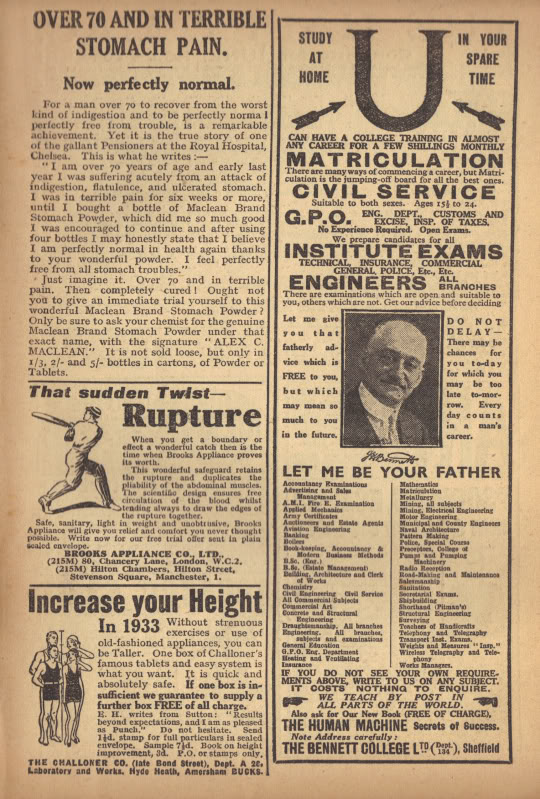 "LET ME BE YOUR FATHER" bellows the rather sinister-looking Mr Bennett, who promises to give free fatherly advice and (for a few shillings monthly) instruction in practically everything. If you're not the academic type so much as the kind of person who goes out playing cricket and ruptures himself, then I recommend "Brooks Appliance" - "Write now for our free trial offer sent in plain sealed envelope." Or if you're short (which judging by these adverts a whole lot of people in 1933 were), take a box of Challoner's tablets and become miraculously taller! The sheer quantity of different ads in this issue of Happy Mag for ways and means to increase your height is really quite fascinating. 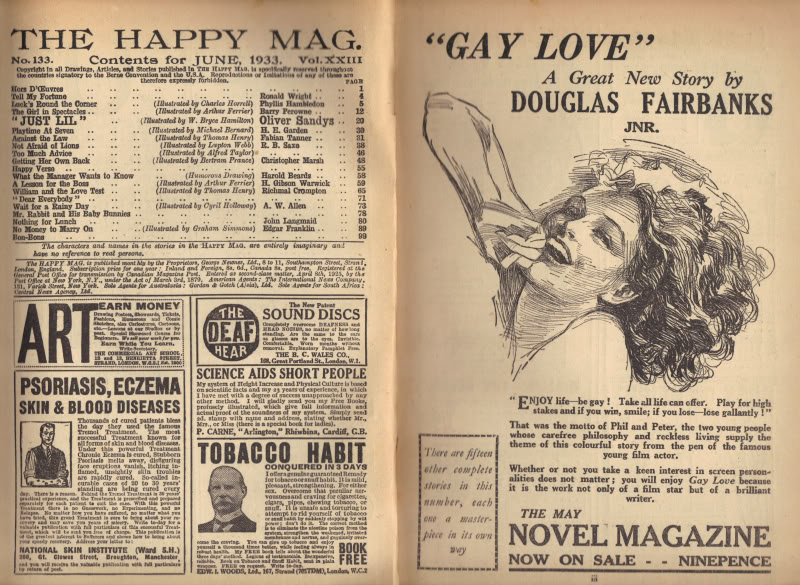 Once more, Science aids short people, this time with a book rather than tablets. And deaf people are completely cured by The New Patent SOUND DISCS ("Are the same to the ears as glasses are to the eyes"). But I'm sure every reader's eye was drawn to the full-page advert for the new story, "Gay Love", by movie star Douglas Fairbanks Jnr, which apparently chronicles the adventures of Phil and Peter, whose philosophy is "Enjoy life - be gay!" This is the kind of situation where any further comment from me would just be redundant. 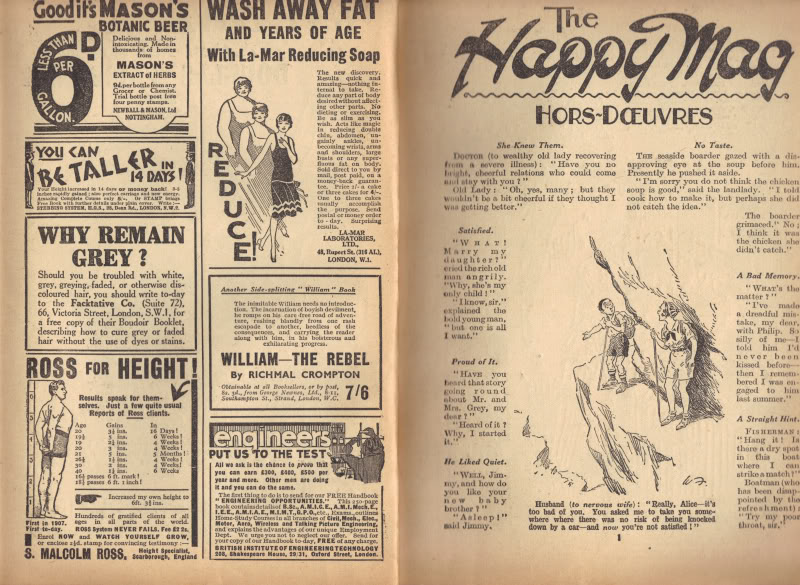 Over the page, we have two more tried and tested means of increasing your height - the Stebbing System and the Ross System. Mr Ross seems more convincing, since he's personally increased his own height to six foot three-and-three-quarters. 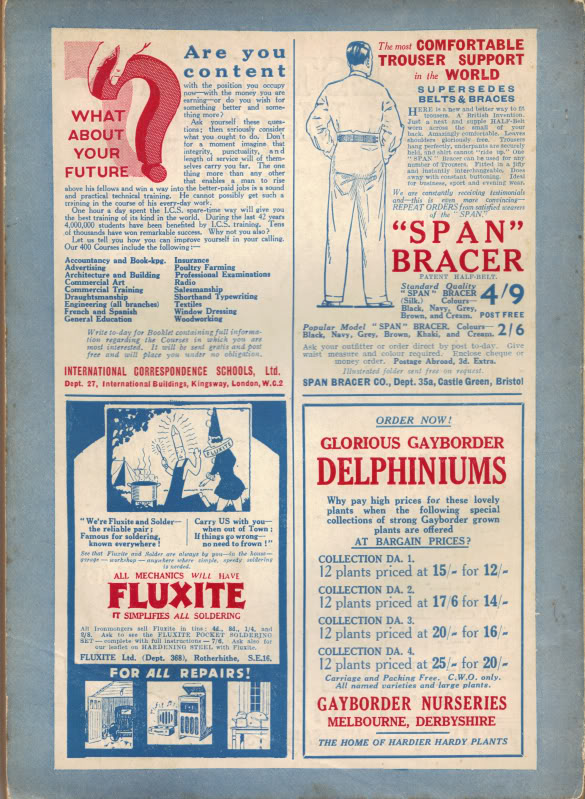 And just for completeness, the ads on the back cover, although there's nothing too funny about these ones. I'd snigger at the use of the word 'gay', but Douglas Fairbanks Jnr has exhausted my puerile-humour quota for the next couple of weeks. The "Span" Bracer that "supersedes belts & braces" is a wonderful idea, though. I'll have to get one, although it looks like you need to wear your trousers pulled up to your nipples in order for it to be effective.

The actual stories are a mixed bunch - they're mostly very similar in theme, almost all of them chronicling the adventures of working girls who end the story by marrying a rich and handsome man and thus not needing to work for a living any more. Particularly noteworthy are Doris in "A Lesson For The Boss", who takes the blame for a costly error of judgement by a handsome young man, since it doesn't matter if she loses her job, because she won't need a job when they get married, and Tessie in "Not Afraid Of Lions", who gives up her circus lion-taming job at the end of the story when "She's the wife of a country gentleman now, and has no time for such things."

The rest of the stories are all essentially the same kind of thing, except for "William and the Love Test", which is a very good one, and a funny-comic adventure of "Mr Rabbit and his Baby Bunnies": 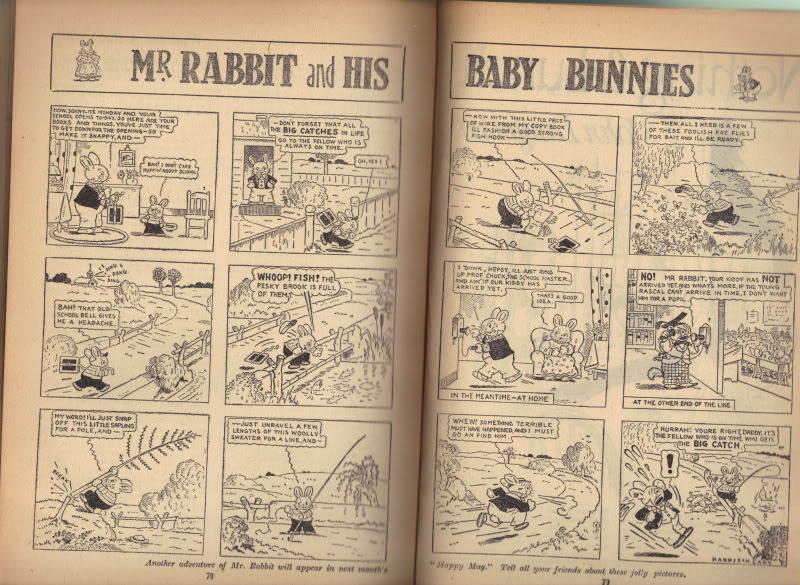 It's unoriginal even in 1933, but nicely drawn and fun to read, so I thought I should share it here.

Anyway, I'm intending to return to daily bloggery from now on, so thanks for sticking with me.
Posted by Zoomy at 6:43 pm 2 comments: