Well, the first round tonight was quite fun. Eight similar matches in a row is probably too much, but they did save the best one till last, so it didn't drag that much.

Tyler Bate is the great character of the bunch, he plays to the crowd in a way that would be really annoying if you're the opponent who has to lose to him, except that he really performs well too and does come across as a really good wrestler. Very athletic, a lot of fun, and that moustache, I love it! He was up against Tucker, who's also very good - one of the couple of people it's a shame we won't be seeing again tomorrow.

The other was Saxon Huxley, who's got the best personality and would do well in the WWE kind of storylines (no stories here tonight, just wrestling), so I hope they get him onto that kind of show in the future. The crowd had great fun with him tonight, calling him Jesus. I laughed.

Wolfgang gets my prize for best wrestler of the night. He's a big man by the standards of this crew (no giants here, it's a pretty shrimpy cast for the most part), but wonderfully athletic and energetic. He talks well, too, he deserves to be a big star.

Mark Andrews might be the best talker of the bunch - some of them sounded horribly stilted and scripted, but Andrews comes across a lot more natural (though the proud Welshman thing would sound better from someone with a Welsh accent...). He also bounces around the ring amazingly well!

Those five are the ones I'd gladly transplant onto the main WWE shows if I was in charge of this kind of thing. Or else set up a regular British series built around them. But let's see what happens tomorrow...
Posted by Zoomy at 10:44 pm No comments:

This is now a full-blown wrestling blog

If I'm not careful, I'm going to turn into one of those people on the internet who tell you at every opportunity how great Daniel Bryan was in the indies and use obscure wrestling jargon that only they understand. I'll try not to. But it's the WWE United Kingdom Championship tonight! Another special edition featuring 16 of the UK's (and Ireland's) top wrestlers, hot on the heels of the World Of Sport new year special. It's on the WWE network, which I pay £9.99 a month for and very rarely watch - I really should get round to cancelling my subscription, but while I've still got it, let's have a look at all the fun!

I don't think it's really appropriate to compare the two as if they were rival promotions, because I think these guys are all friends and intermingle freely at live events. But it's probably fun anyway, so here we go. World of Sport was a mainstream ITV production, so the target audience is obviously people who don't routinely watch wrestling, but maybe remember or have heard of the old days when it was a regular feature of Saturday evening telly in the seventies. The WWE championship is on the WWE Network, the internet service for people who don't get enough wrestling from the weekly shows on satellite TV and need even more supporting material. It's a smaller but much more intense audience. 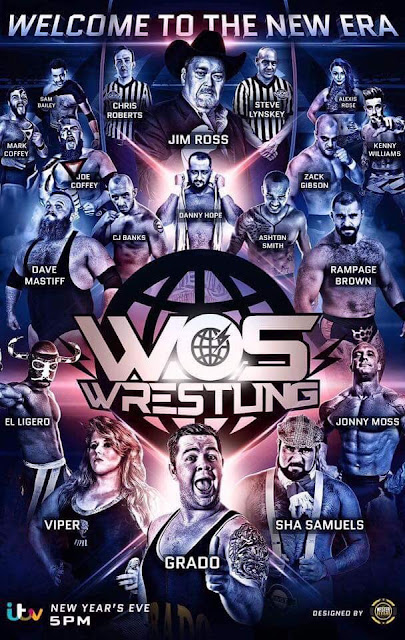 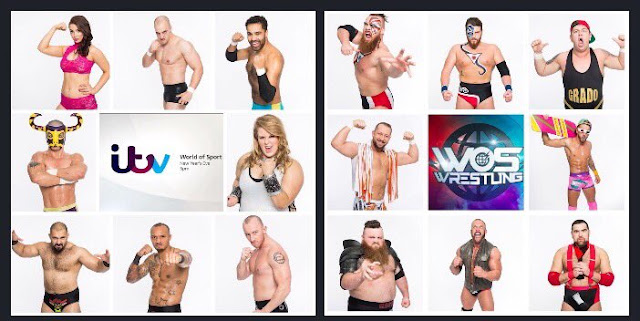 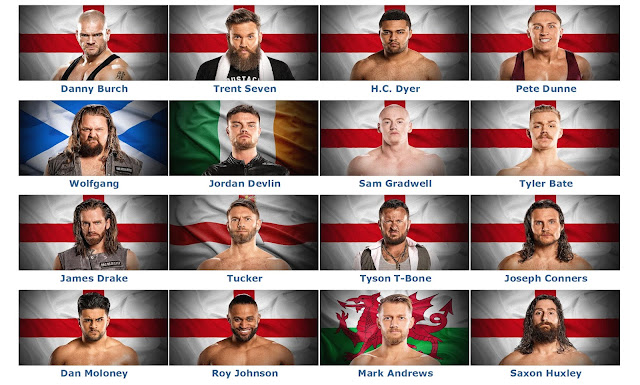 Quite a few of the WWE crowd put across a lot of personality in those headshots though - Tyler Bate's old-fashioned moustache is awesome, Tyson T-Bone wins the prize for most distinctive appearance, Pete Dunne's nervous grin is brilliant and Roy Johnson's friendly smile is a nice contrast to all the other grim faces.

While the WOS special tried to cover the whole spread of different types of bout (four singles matches, one ladder match, one tag match, one battle royale) with an interweaving storyline, the WWE event is a straight knockout tournament of singles fights - so 15 matches in total, spread across two live nights. Unless, of course, there are some surprises in store... I'm curious to see how it'll be scheduled, because if they do the first round on Saturday and the rest on Sunday, that'll mean the finalists have to fight three times on one night, which I don't think wrestlers really like to do (Grado did it on WOS, but one of them was the battle royale and he was able to spend most of it lying in the corner of the ring while other people battled around him). So we'll just have to see what they come up with. I'll write an in-depth review, or maybe even two!
Posted by Zoomy at 2:17 pm No comments:

I see the WWE are launching themselves into the UK wrestling market this weekend, just a fortnight after the World of Sport special, with an all-new UK Championship special featuring sixteen wrestlers from the UK or nearby (one of them's from Dublin, but hey, Americans don't know the difference). I've still got a WWE network subscription despite my "I don't watch live TV any more" nonsense, so I'll watch it and blog about it on Saturday or Sunday night, or both. This is turning into some kind of wrestling blog, so I'll try to swerve it back in the direction of memory or something after that...
Posted by Zoomy at 7:59 pm 1 comment:

I'll never make a professional gambler. I thought about cashing out that bet when Cambridge were 1-0 up at half-time, and spending the winnings on something else, but I decided not to bother in the end, and Leeds went on to win 2-1.
Posted by Zoomy at 7:42 pm No comments:

The road to ruin

I got an email from William Hill this afternoon, saying that since I haven't used my account for 13 months, they're going to start charging an inactive account fee on my balance. It was news to me that I've got a balance, but I checked it, and sure enough, there was £2.25 in there!

I can't remember where it would have come from - I'm not above occasionally betting on the football, but I normally use Coral. I do remember using the William Hill account once or twice, so I know it must be a real thing, but how did I not notice I'd left £2.25 on there?

Well, there's not much football tonight to bet it on, so I've put the lot on Cambridge to beat Leeds, at 10/3. Big money, here we come.
Posted by Zoomy at 6:21 pm No comments: