I would be really good at this, too

I got this email today: 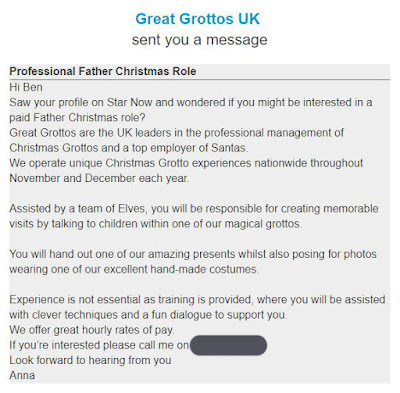 Yes, I've got a profile on StarNow, the website for people who really want to be actors. I created it years ago, and a while back (drunkenly) reactivated it.

Anyway, I've been saying for years that as soon as my beard's gone entirely white, I'll be all ready to make a living being Santa at Christmas time. I'm not quite there yet, but Great Grottos at least seem to think I am. I'd love to take them up on it, but I've got to work in my day job. Maybe next year...
Posted by Zoomy at 7:12 pm 1 comment:

Happy Thanksgiving to anybody who's American and reading this today. And Happy Dr Who Anniversary day to anybody who just likes it when it's the anniversary of the first episode of Dr Who.

Also, for tomorrow, Happy Silver Sonic Twosday! Remember all the excitement of 25 years ago, when Sonic 2 came out on the Mega Drive? It feels like only yesterday. Everyone needs to get out their old Mega Drives and Sonic 2 cartridges (what? I can't be the only one who's still got them, can I?) and play it - don't forget that if you play songs 1,9,9,2,1,1,2,4 on the level select screen, you activate the debug mode.
Posted by Zoomy at 7:54 pm No comments:

It's very sad that Earle Hyman has died, but then 91 is a good age, and at least most of the internet articles about him remember that he was one of the heroic six voice actors who between them did every character on Thundercats.

I think the high point of his Thunder-career was Nemex, owner of the eponymous jail in the episode "The Astral Prison". He has a brilliantly over-the-top voice, and I urge you all to get out your DVDs and video tapes and watch it again right now! "Brave words... FEEBLE FOOL!"
Posted by Zoomy at 8:33 pm No comments:

Dagnabbit. I've had an email from a Chinese TV show, "Impossible Challenge" - they want to fly me out to Beijing to compete in a speed cards* contest against Zou Lujian (who's much better than me) in what would be a really cool and epic kind of TV experience. I'm still apparently a popular household name in China** and to lose to the top Chinese competitor would give the whole memory sport scene over there a huge boost.

Trouble is, they want me to be over there from the 14th to the 19th of December, and I really can't take that time off work. Our holiday year at work runs from January-December, and I've just taken a week off, specifically because I had five days left to use and didn't think I'd be getting any particular reason to save them up! And the company shuts down for the year from the 22nd onwards! So this invitation is exactly one week too early. If they could just accommodate me the week after, it'd be great! I could go to Beijing, fail to remember a pack of cards, and go up to Harbin to see my brother*** for Christmas!

Actually, the real problem is that if I asked my bosses to give me the time off work, they'd probably say yes (judging by last year, there won't be very much work gets done there the week before the shutdown), but I really don't want that to happen. It makes me think they think it doesn't matter if I'm in the office or not, and although I myself think that, I like to delude myself into believing that the higher-ups consider me indispensable.

It's possible I'm over-thinking the whole thing. I do that.

*Actually, the email (which has presumably been through an online translator) describes it as a "shorthand poker" contest, but I'm fairly sure from the context that it's speed cards. The Chinese call a pack of cards a "poker", you know. That's basically the entirety of my knowledge about China.

**Just on Friday I was told by a young woman that she'd seen me on "The Brain" and thought I was great, and she was interested in memory competitions and things. Of course, when I told her that there are a lot of memory people in China, she replied (sounding only slightly offended) that she's Chinese-Malaysian and just happened to see the Chinese TV show, but I still take this as proof that people in the general area of China know who I am.

***Who doubtless has already made his arrangements to spend Christmas with other people, and really wouldn't appreciate me flying five thousand miles**** to turn up on his doorstep unexpectedly.

****I actually have no idea how many miles it is from here to Harbin. For all I know, it might be next door and the airlines are just playing a big practical joke on people.
Posted by Zoomy at 7:52 pm No comments: