The Grand Prix (without cars) 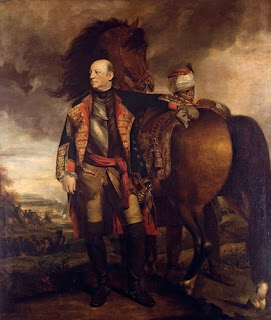 Under the watchful gaze of the Marquis of Granby's horse's bum, the 2020 European Grand Prix othello championship commenced this weekend, in the scenic surroundings of Trinity College, Cambridge. In a room full of huge portraits of aristocrats, 24 competitors from around the continent came together - a really good number for an 11-round tournament followed by a grand final.

The EGP system has changed this year, with just four tournaments (with an overall winner based on points from their best three results), plus a separate European Championship. But the Cambridge event is just the same as it's always been, even if the part of the city around the railway station has changed enough for me to nearly get lost on my way to my hotel, the "Cambridge Central" Travelodge. Near the station, nowhere near the centre.

I wasn't really expecting to do anything special, although I've been playing a little bit on the internet in the last few weeks to remind myself how the whole othello thing works. And the first day was typically unexceptional - I won my first game, against Chiara Gigliucci, 33-31, and the WZebra computer says we took turns playing losing moves in winning positions an embarrassing number of times. Still, it's really only the last losing move that counts, and luckily I didn't play it. I was comprehensively beaten by Marc Tastet, Marcel Sneek and Matthias Berg, but did record wins against Mark Plowman, Sophie Tastet and (entirely undeservedly) Remi Tastet, who lost on time but should have won. So when we stopped for the day and went to the traditional Indian restaurant meal, I was on four wins out of seven - a good way towards my usual target of five and a half. But I was expecting to come up against top players in the four remaining games on Sunday...

As it turned out, though, my first game on Sunday was against Wendy de Graaf, who isn't as top as some, and for the first time in the tournament I thought I played a good game, getting a nice win. Five out of eight is definitely above the half-way mark! 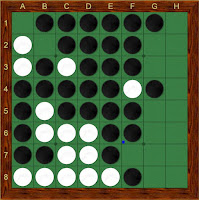 Then in round nine I was up against Imre, who's always the toppest of the top players. But I'd mentioned at the meal on Saturday night that I've beaten him a surprising number of times in the past, and I was pleased to see I was playing black, which always works better for me, and it ended up working out very nicely! We had a very fun game revolving around the kind of position you can see on the right, where I'm trying to arrange things so I can play to B2 without him being able to play A1, and he's trying to stop me. And I ended up winning 34-30! (WZebra, which can be a real killjoy sometimes, suggests that Imre really should have won, but never mind, it's the actual result that counts!)

After nine rounds, there was no clear leader, with Takuji and Jan on seven points, and five of us on six - Marc, Imre, Matthias, Roel and me. Exciting! 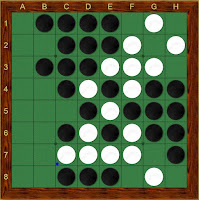 So in round 10 I was up against Jan - I'm white this time, and the game had all kinds of wild and crazy positions of the kind that I find indescribably beautiful - I had to play this move, just because I think it's brilliant that it prevents Jan playing C5. It did make me think "Okay, it really looks lovely, but what do I do from here?", because he can still play to B6, and I still need to find another way to stop him being able to go anywhere good, but I'll go with a pretty-looking move any time. And then later he played a Stoner trap on me, when I'd just been thinking earlier that my favourite thing to do is play Stoner traps even when they don't seem likely to get enough discs to win - and eventually I did end up winning, 37-27!

With one round to go, that made it Takuji in the lead with 8, and Marc, Imre, Jan and me on 7, with Roel, Bruce and Guy behind us on 6. I was in with a chance of making the final! A slim chance, I'll grant you, because my tie-break score was comfortably the lowest (lots of narrow wins and heavy losses will do that to you), but a chance nonetheless! I'd be playing Takuji, and if I absolutely thrashed him, or the other three seven-pointers messed things up against their opponents, it was still theoretically possible! 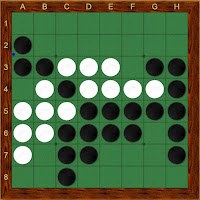 I had beaten Takuji once before - it was in 2003, so I felt that I was really due another win, especially since I was so totally on a roll here. I'm playing black, and got into a situation that I really didn't think was hopeless - it just looks like there's a way to make him run out of moves if I play the bottom section right, and eventually force him to play into a disastrously bad place... but as it turns out, there wasn't a way, or at least not a way that didn't require him to do something silly, which he didn't. So I ended up losing 44-20, and had to give up on that dream of playing in the grand final. Which is a good thing, all in all, because I was meaning to go home at lunchtime, and if I'd had to stay in Cambridge I wouldn't have got back to Redditch until the middle of the night.

Guy had beaten Jan in the final round, but Imre and Marc won their games against Wendy and Bruce, with Imre getting enough discs in his game to sneak into second place on tie-break. The final table after the 11-round swiss looked like this:

That meant a grand final between Takuji and Imre, which Imre won 33-31 and 44-20, and a 3rd place match between Marc and Roel, which Roel won 35-29. So despite my best efforts, Imre won the British EGP for Britain, and I got a share of 5th place!

This also gets me a certain amount of points in the European Grand Prix - I'm not sure how many, because they were talking about changing the rules and I don't remember seeing the result of the vote. But okay, I think this is going to be my 'thing' this year. I'll go to all the EGP tournaments if I can - Barcelona on 21-22 March, somewhere in the Netherlands on 27-28 June, Copenhagen on 15-16 August! And the European Championship in Rome on 2-3 May! I've never really travelled the world for othello competitions - I went to France once, and it's quite possible that there are others I've forgotten, but doing the complete EGP is definitely a new thing for me!

Apparently this year is a good time to travel the European Union, anyway, before they introduce visas and blue passports and things, in the unlikely event the government does something about it. The Grand Tour is on!
Posted by Zoomy at 8:38 pm No comments: