Let's have a party with Charlie Brown and Snoopy

Some people, when they find themselves with a huge list of things that really need to be done over the course of a weekend, prioritise the most essential tasks and use effective time management techniques to make sure the best job possible is done. Others give up on the whole thing and decide to devote their time to something reassuringly completely unnecessary and yet entertaining enough to distract them from all those other things they were meaning to do.

With that principle in mind, I hereby rectify the shocking absence from the internet of a really good visual analysis of the relative prominence of characters in the early years of the Peanuts comic. The following graph is a moving annual total of appearance in the daily comic strip; each point shows the number of strips that character has been seen in for the year up to and including that date. 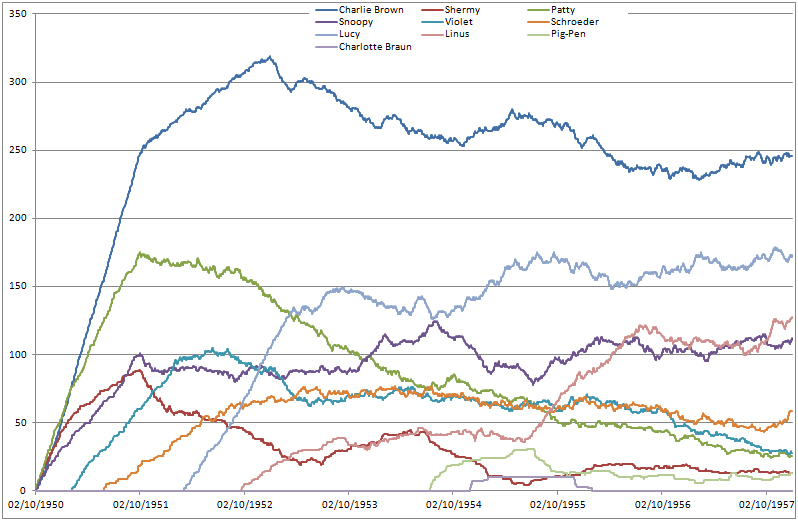 When the strip launched in October 1950 its three regular human characters - Charlie Brown, Shermy and Patty - shared the spotlight, and it's actually Patty who makes the most appearances in the first couple of months. Snoopy, who at this point is an entirely normal dog, plays a supporting role. By the start of 1951, though, Shermy's appearances have already started to dwindle and Charlie Brown becomes established as the star of the series. Shermy never gets any real kind of personality, strangely enough. He's one of life's straight men whose job is to stand there and listen to the punchline once in a while.

The introduction of Violet in February doesn't change the dynamics very much, as there's not much difference between her and Patty, who still features more often. More interesting is when Schroeder makes his debut in May, as a baby who can't yet walk or talk (or even play the piano). He grows up surprisingly quickly, and by the time of Lucy's debut in March 1952 she and Schroeder both are just slightly smaller than the other characters.

Lucy immediately zooms to prominence in the daily strip, mostly at the expense of Patty, although it takes her several months to transform from the baby of the group into the kind of personality she eventually settles on. Linus, when he makes his debut in September, is much more of a slow burner; he remains a baby for a much longer time and settles into a pattern of only occasional appearances for the best part of three years, seen more often only than Shermy (who at one point in 1954/55 shows up only twice in nine months, but doesn't quite get forgotten about altogether).

We settle now into a pattern of Charlie Brown featuring in the majority of strips, with Lucy the other central character and Snoopy gradually getting more anthropomorphised as time goes on (his thought bubbles make a debut around this time and he starts to dance on his hind legs on occasion). Schroeder, Violet and Patty are the supporting players, and it's interesting how closely the lines for Schroeder and Violet stick together on the chart - it's unusual for them to appear together, but they each alternate in strips alongside either Charlie Brown or Lucy.

The other supporting characters of the 1950s don't get much exposure - one-joke character Pig-Pen is used sparingly and Charlotte Braun, although introduced as a new main character, is dropped completely after just a couple of months. There's an almost complete and total lack of other characters, even in the background nor even as passing mentions.

In July 1955 Linus suddenly becomes much more interesting - armed with security blanket and unique philosophy he ages to just a little smaller than the others and starts to play a central role. With Patty and Violet fading to near-Shermy levels of obscurity, the more familiar main cast of Peanuts is in place. We're still a long way away from Snoopy's eventual domination of the strip (in 1957 he'd just started to walk on two legs from time to time), and the sixties add some more major characters to the mix, but I thought seven years was about as far as it was worth going with this. All those other things to do, you see...
Posted by Zoomy at 9:15 pm 2 comments: