It's the Scandinavian Open Memory League Championship on February 2 and 3, and I'm going to go to Lund and join the fun! Lund is in Sweden, but the bit of Sweden that's right down at the bottom, so the way to get there is to fly to Copenhagen and then cross over the really big bridge between Denmark and Sweden. I think the first half of it is called the Øresund Bridge, and then when you get halfway across, it transforms into Swedish vowels and becomes the Öresund Bridge. Scandinavia is a confusing place; I hope we don't have to memorise that kind of thing in the competition.

But hey, you should come along too, everybody! Memory League championships are always a lot of fun!
Posted by Zoomy at 10:50 pm No comments: 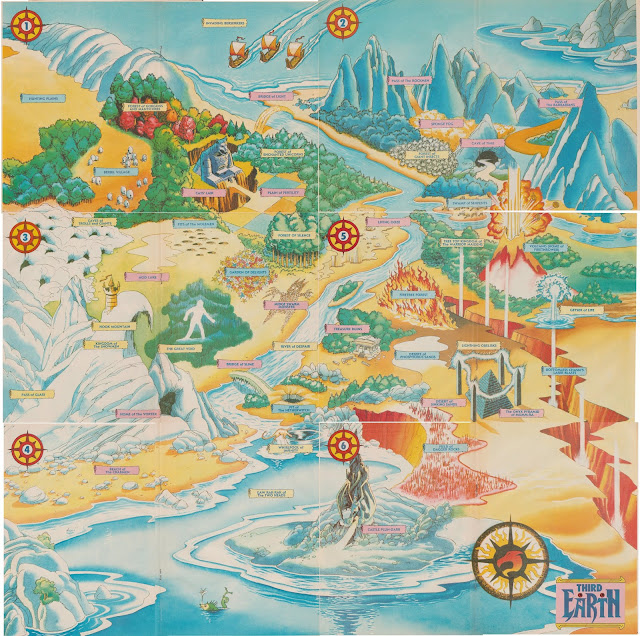 I've just bought a lovely bundle of Thundercats comics on eBay - the ones with the pull-out map of Third Earth in the centrespreads of six consecutive weekly issues that came out around the time of my eleventh birthday in 1987. I did buy them at the time, but naturally pulled out the giant map and assembled it on the wall, whereupon it presumably eventually fell down and got thrown away, I don't remember.

Anyway, isn't this map wonderful? And I couldn't find this specific version of it on the internet, so I thought I should share it with the world. Those six issues of the comic also have a six-part story written by Simon Furman, as always able to respond to a request like "write a story made up of six eleven-page instalments that revolves around a map of Third Earth in some way" and produce a work of genius, scripted by Ian Rimmer and drawn by various artists who never really made the Thundercats characters look like they did on the cartoon - somehow, I always felt like that was more of a problem with the Thundercats comic than it was with Transformers or He-Man, but I don't know why. Anyway, this story kept me entertained at the time, so what more could you ask for?

These comics also feature the first appearance of "One Cat and his Cod", the half-page strip by Lew Stringer that was a requirement in all Marvel UK comics at the time, thanks to the masterpiece that was Robo-Capers in the Transformers comic. The Thundercats one, though, was written by Ian Rimmer, and revolved around some really terrible jokes and existential discussion - Dave the cat and Bjorn the cod briefly wonder why they can talk, but conclude that it's because they're characters in a comic strip. And as a back-up strip there was Power Pack, which had already been the back-up in the old Star Wars comic, but hey, Power Pack was always good. Well worth 35p a week in the old days, or £15 for ten comics today!

I'm not sure about the advice to buy two copies of each issue, in order to remove the centre poster without losing two pages of the story - they printed a letter asking why they didn't put adverts or the letters page on the reverse sides of the centre pages, and the reply explained that adverts are booked for specific pages of the comic, and they just didn't want to put the letters page there. It then reiterated that buying two copies was the way to go - "expensive, but worthwhile!" - thanks, guys. Luckily, it's the 21st century now, and we have scanners, and blogs. I can keep my comics intact and still share the map with you all!
Posted by Zoomy at 5:08 pm No comments: